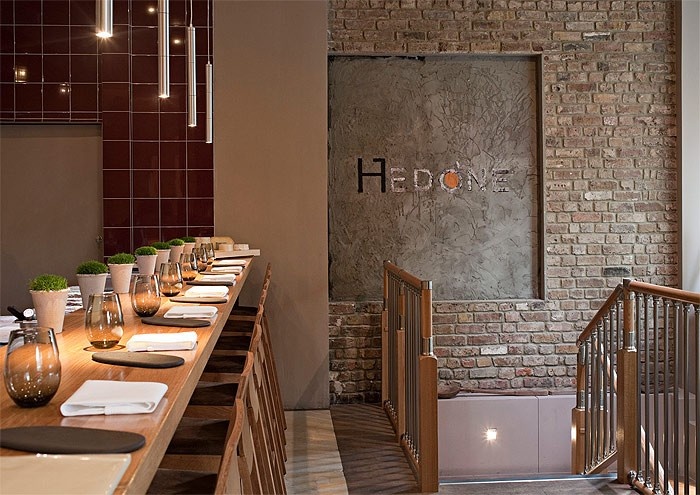 Former blogger Mikael Jonsson has created his ideal restaurant in Chiswick, with an emphasis on freshly sourced ingredients.

Critic reviews - total score 8 out of 10

Amol Rajan Independent
"Hedone is expensive, but worth saving up for. If you want somewhere that turns on the style and gives you an extraordinary array of tastes in one sitting, head to Jonsson's Chiswick extravaganza. Just don't be nursing a hangover." READ REVIEW

Zoe Wililams Telegraph
"It's quite fussy but, for the fuss, OK value. I personally would come back for the smoked potato, but that's just me." READ REVIEW

Chris Pople Cheese & Biscuits
"I am convinced, objectively, that Hedone is a very good restaurant, possibly world-class. But I think I'd rather have a pizza. Sorry." READ REVIEW

AA Gill Sunday Times
"This dining room gave me such pleasure and left us with a rounded sense of satisfaction and replete wellbeing, without self-conscious fuss." READ REVIEW

John Lanchester Guardian Estimated score
"(Jonsson's) cooking is all about getting the very best possible ingredients – in which this country is rich, much richer than it realises – and then emphasising rather than denaturing their flavours. At its best, Hedone does this brilliantly." READ REVIEW

Tony Turnbull Times Estimated score
"I suspect that, like a lot of lawyers, he has a forensic eye for detail, drilling down to the purity of flavour in his ingredients, but by the end I felt we were paying for him to indulge his passions and not our own." READ REVIEW

Marina O'Loughlin Metro
"Hedone is from the Greek word for pleasure and for your food nerd, this is close to Nirvana. Regular punters? I’m not so sure." READ REVIEW

Fay Maschler Evening Standard
"(Jonsson's) own food has remarkable clarity. Effort is expended in tracking down produce that is best in show - if possible in the UK - and effecting interesting, fortuitous introductions." READ REVIEW

Hermano Primero Dos Hermanos Estimated score
"I have to fess up and say I’m already a little bit in love with Hedone to the extent that I almost considered cancelling a recent trip as it would mean not visiting for a couple of weeks." READ REVIEW

Guy Dimond Time Out
"Hedone's not perfect, but it's one of the most interesting and accomplished restaurants to have opened in London for a long time." READ REVIEW
Powered by JReviews
0
Shares