City Social is Jason Atherton's City restaurant high up in the high-rise Tower 42. There's a fancy design by Russell Sage, a more high-end experience some of his other ventures and a huge bar space. Oh, and there's a fantastic view too. 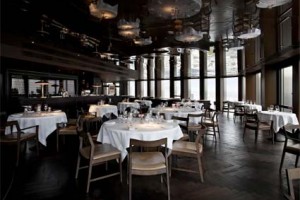 We go to the 24th floor at Tower 42 to try the latest restaurant from the very busy Jason Atherton - City Social.
Read more

Matthew Norman Telegraph
"Certainly the food at City Social flirted with excellence. But the food, as I remind you far too often, is barely half the battle. This one was lost before the starters arrived, the white flag effectively raised by the unmistakably clinical aura of profiteering efficiency." READ REVIEW

Jay Rayner Observer Estimated score
"Technically, mains are a masterclass. There are pieces of rabbit saddle, bound together and wrapped in ham to form a cylinder, plus an impressive rabbit sausage and a side dish of a barley-like grain with braised rabbit. A duck dish brings hunks of breast and boulangerie potatoes and a berry compote. Technically impressive they may be, but they lack heart and soul." READ REVIEW

David Sexton Evening Standard
"Overall, we felt the meal resembled top-notch in-flight service in first class, while the room, re-appointed by the ubiquitous Russell Sage in dark browns and shiny rosewood, could have been an airport’s luxury lounge, designed to soothe the jet-lagged." READ REVIEW

Steve Dineen City AM Estimated score
"While Tower 42 may be a boldly untrendy location for City Social, it works. It’s a blank canvas, it lets the food do the talking. And the food says mostly good things. It sure isn’t the only restaurant in London’s sky, but it’s probably the best." READ REVIEW

Tania Ballantine Time Out
"The service is as well-mannered as the cooking, while sauces and syrups poured at the table add some va-va-voom. But the real showstopper here is the view. Just be sure to pick the right entrance." READ REVIEW
Powered by JReviews
0
Shares