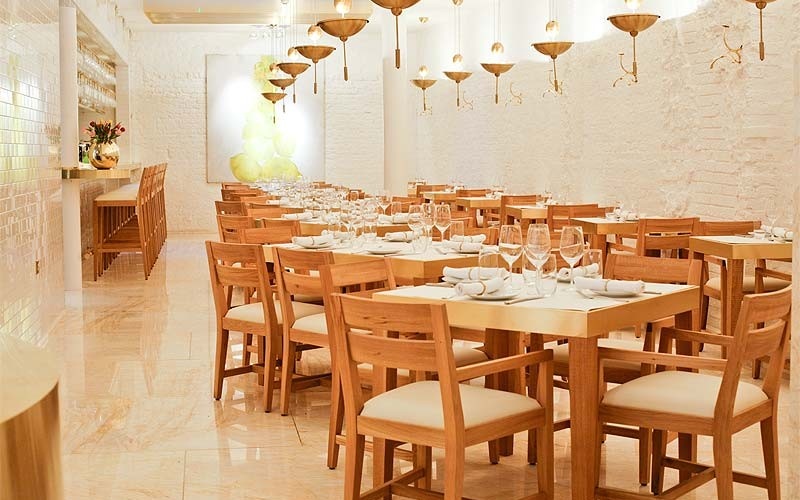 Critic reviews - total score 7 out of 10

Chris Pople Cheese & Biscuits
"And yes I know central London rents are higher but I also happen to know that at Peckham Bazaar (currently closed for renovation, but back open in April), a much more impressive range of Eastern Mediterranean dishes are being produced for a fraction of the cost." READ REVIEW

AA Gill Sunday Times
"The good things were fine, the more actual cooking that was involved, the more surely the dishes defeated the kitchen. The service was charm itself." READ REVIEW

Zoe Williams Telegraph
"The truth is that the first three dishes, against this background of expectation, were such a disappointment mingled with surprise that I can only technically describe them as a shock." READ REVIEW

Marina O'Loughlin Metro
"...I go back for dinner and now reckon it’s one of the most interesting, affable and, yes, delicious openings in recent times." READ REVIEW

Giles Coren Times
"“The thing about Ottolenghi,” said Esther... “is that he uses the same ingredients in everything. He uses wonderful stuff ...but every plateful has so many ingredients that 94 per cent of the DNA of each dish is identical, the difference between two main courses is only ever as different as a mule from a donkey."" READ REVIEW

Jay Rayner Observer Estimated score
"...what he already does at the delis is so perfectly poised, in such damn good taste, that it's tricky to see how it could be elaborated on. If you already love Yotam Ottolenghi's cooking you will not find a better version at Nopi." READ REVIEW

Tracey MacLeod Independent
"All the dishes look beautiful, for as long as they last; as with Ottolenghi, this is chick food – big flavours, few carbs." READ REVIEW

Lisa Markwell Independent
"The buzzing atmosphere, dazzling food and attentive staff make Nopi a very attractive proposition... For food at this level of cooking, the price is not unreasonable, but it does elevate it to an occasional, special occasional, treat." READ REVIEW

Guy Dimond Time Out
"It was the simplest dishes that worked best. Chunks of kohlrabi were cut like an apple and served raw, with a simple dip of mint-flavoured soured cream." READ REVIEW

David Sexton Evening Standard
"Nopi offers full service at table of small dishes, divided unpretentiously into meat, fish, veg and sweets, advising on the menu... And they turned out to be very hit-and-miss, surprisingly." READ REVIEW

Stephen Farmer View London
"This is another pleasing antidote to ostentatious cooking from someone who really knows his stuff." READ REVIEW
Powered by JReviews
0
Shares