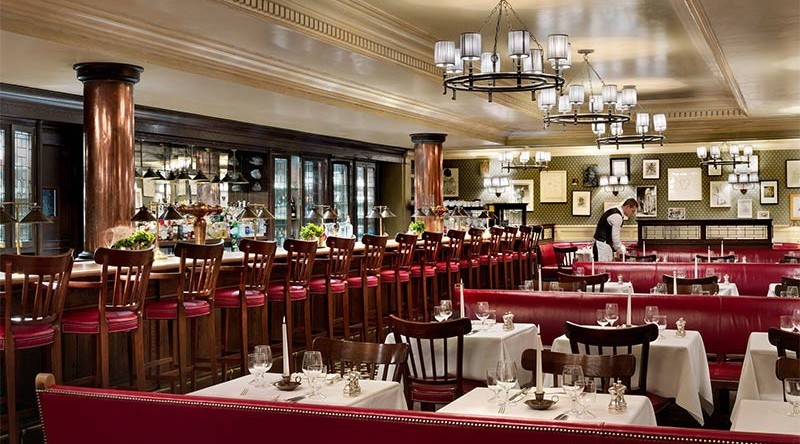 Part of Nick Jones' Soho House empire, this is a hotel and restaurant space in Dean Street. This 'glorious cream Georgian building, originally home to the Gargolye Club' (their words), has 41 bedrooms alongside a traditional English dining room, seating 120. The all-day menu includes British favourites as well as afternoon tea, weekend brunch and weekly Sunday roast.

Matthew Norman Guardian Estimated score
"Many joints have tried to create the perfect French brasserie serving delectably simple English food, one of us sagely observed, and this is the first to crack the combi­nation." READ REVIEW

AA Gill Sunday Times
"Dean Street Townhouse is a knowing place. A clever place. A decoupage of associations, assumptions and ambitions. It may be too clever by half." READ REVIEW

Zoe Williams Telegraph
"What can I say? I want to be different and complain about everything, but this is exceptionally well done." READ REVIEW

Jay Rayner Guardian Estimated score
"There is, however, absolutely no excuse for taking peasant food and gussying it up to such a degree that it loses all sense of purpose." READ REVIEW

Giles Coren Times
"Preferential treatment or not, the assortment of native and rock oysters was beautiful, and the roast chicken for two was fat and swaggering with perfect stuffing and roast potatoes, and the mixed grill was a macho blowout bang out of the Seventies. " READ REVIEW

Marina O'Loughlin Metro
"Propping up the bar, or dividing that chicken, or ordering high tea (yes, high tea! Fish fingers! Macaroni cheese!) – all of them make me happy, which is what a good restaurant’s all about." READ REVIEW

Toby Young Independent
"A mid-range hotel restaurant is new territory for Jones and Caring, but the fact that the Townhouse has proved such an instant hit suggests they've got it right." READ REVIEW

Hermano Primero Dos Hermanos Estimated score
"...like a lot of visually impressive gaffs the food is a bit of an afterthought. Things get worse over time once restaurateurs realise the average punter has pretty low standards and that the food has to be just good enough." READ REVIEW

Guy Dimond Time Out
"Dean Street Townhouse might not be for everyone, but it’s certainly interesting." READ REVIEW

David Sexton Evening Standard
"This was one pretty sumptuous meal that left us feeling completely well after we had eaten it and for the rest of the day." READ REVIEW

"Richard & Peter" Harden's Estimated score
"Many people will be prepared to forego quite a lot of originality and ambition for such a high and consistent level of achievement." READ REVIEW
Powered by JReviews
0
Shares