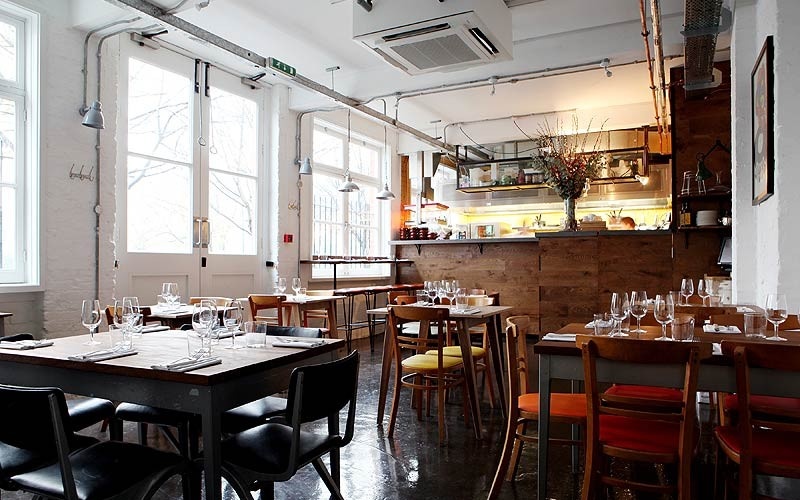 Terroirs owners have headed East with their opening of a natural wine bar and bistro, right in the heart of the Columbia Road flower market. Head chef is Owen Kenworthy (previously at Terroirs and The Wolseley).

Zoe Williams Telegraph
"...what's good here is far better than the less-good things are bad. It's fun and simple and enjoyable, and I'd come again in a flash." READ REVIEW

AA Gill Sunday Times
"The food was certainly worth a trip, and the kitchen did well to keep up, but it’s best when compiling tapas from cleverly sourced ingredients, less good when it actually has to cook from scratch." READ REVIEW

John Walsh Independent
"I'd eaten, single-handedly, a serious helping of pure pork and a sharing-plate of raw beef. My main course of duck confit with lentils was still to come. Would I explode?" READ REVIEW

Giles Coren Times
"The staff were as solicitous, clued-up and good-looking as ever, the dub reggae was right up my street, the other diners were having a whale of a time. Do believe my hype. This place rocks." READ REVIEW

Richard & Peter Harden's
"Brawn is just as good (as Terroirs). If anything, we prefer its laid-back vibe (and, for the moment at least, it has the benefit of the primary attentions of the original team). But this is not a style of cuisine that’s every going to be worth crossing town for..." READ REVIEW

Marina O'Loughlin Metro
"...it’s perfectly nice. Not brilliant, not swoonworthy, not knocking any socks off this particular punter. Am I missing something?" READ REVIEW

Euan Ferguson Time Out
"Brawn is dedicated to eating animals. Not exclusively, but this is clearly where the kitchen's interests lie. And if this doesn't put you off, it could be worth a visit." READ REVIEW

Lisa Markwell Independent
"Food of this quality at this price is rare indeed. I hope there's enough buzz to draw diners all through the week (hell, if I didn't live and work on the opposite side of London I'd be there every other day)." READ REVIEW

Fay Maschler Evening Standard
"...(the) meal was thoughtfully sourced and in parts bewitching (from a menu that changes daily), was perfectly executed and served by un jeune homme sérieux at exactly the right pace." READ REVIEW

Chris Pople Cheese & Biscuits
"...rather than simply being Terroirs' "little sister", Brawn is already shaping up to be a much more mature and accomplished operation." READ REVIEW

Hermano Primero Dos Hermanos Estimated score
"It does seem to me that places predicated on their wine just can’t get the hang of this cooking lark and so it proved at Brawn. Having said that it’s a pleasant, relaxed place for a drink..." READ REVIEW
Powered by JReviews
0
Shares