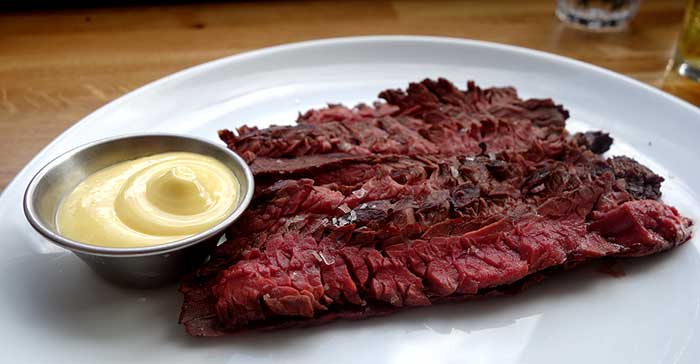 So what do we need to know about Beef & Brew?

This new addition to Kentish Town's High Street may, as one passerby remarked as we were going in, have something of a chain look about it. But it is in fact an independent restaurant opened up by Dan Stevens and partner Jessica Simmons, who comes here via Murano, Whitechapel Gallery dining room and - crucially, given the liquid part of this restaurant's equation - the kitchen at London Fields Brewery. Their aim, they say, is to serve up 'quality unpretentious food'.

If you're coming here by tube, it's about a minute's walk from Kentish Town tube on the other side of the road. Locals will know it as the place where Italian restaurant Pane Vino stood for many, many years.

Well, there's the Oxford opposite, which is perfectly fine and the new look Bull and Gate is just up the road but we'd recommend local cocktail bar Ladies and Gentlemen over both of those. There's also a short cocktail list on offer here, although we were lunching and didn't dare try any.

There are a few counter seats up at the bar which, if you have a mind to, you could pop in and just have a beer with some of the smaller bites on the menu. There's also a large communal table in the centre of the room and a mixture of tables of two and four. But we preferred the low window counter as a spot to dine, particularly at lunchtime (as long as you don't mind passers-by eyeballing you while you eat).

The restaurant's name may suggest a narrow focus, but there's actually more variety than you'd expect. Sure, most of the offers are beef and beer related but, if you wanted, there's a veggie beer cheese melt or crispy fried chicken. Hell, there's even salad on the menu.

We kicked lunch off with some incredibly moreish brisket jam nuggets (£4.50) and some more than decent cauliflower cheese croquettes (£4). If you're after beef the menu is split into steak, steak salads and beef buns. As there were two of us, we tried both steaks - hanger (£10) and flat iron (£12.50). Both came, as the chef suggested, medium rare but it was the hanger, or onglet, that was the star of the show - beautifully cooked and seasoned.

Because we're pretty piggy we also found room to test one of the buns - the short rib French dip (£9) which would make a great lunchtime dish, served rather sweetly using a creamer to deliver an intensely rich gravy for dipping. We also appreciated the bun's cheese - made themselves using Camden Brewery beer. A side of charred daily greens made us feel slightly less unhealthy (£4) and the only disappointment of our meal was the polenta chunks (£4) which were too dry.

There are just two desserts - a mess of brownie with salt caramel, chocolate and porter sauce (£5) which sounded great, but would have left us asleep at our desks that afternoon. Instead we went for a pick-me-up of malt ice-cream affogato (£3.50).

While there are cocktails and a small wine selection and a range of soft drinks, it seemed crazy not to try the beer particularly when they offer flights and beer and food matching suggestions. The house draft is Fourpure Pils (£2 for a 190ml glass) which went well with pretty much everything and a can of Camden Brewery India Hells lager matched the brisket bites nicely.

This could have been just another dirty/dude food opening, but the food we tried showed a lot of thought had gone into the dishes. There aren't many places you can have a steak meal out so reasonably and if they work out some faster dishes for the lunchtime trade to match the busy evenings here, we reckon they've got a hit on their hands.

Prices were correct at the time of writing. Hot Dinners ate as guests of Beef & Brew.