[SIGPLUS_EXCEPTION_SOURCE] Image source is expected to be a full URL or a path relative to the image base folder specified in the back-end but /blog/2014/fera/gallery is neither a URL nor a relative path to an existing file or folder.
0
Shares

Written by Catherine Hanly
Created: 13 May 2014 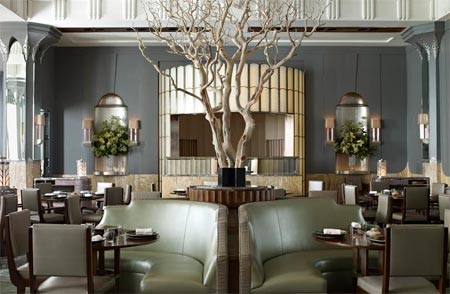 If you've been out of the loop COMPLETELY for the past year - you may not know that this is the new restaurant at Claridge's, taking over the space that was once occupied by one Gordon Ramsay. The hotel brought designer Guy Oliver to open up the room and Simon Rogan to bring his inspiration to the kitchen. They describe it as "an experience inspired by the rhythms of nature".

The ballroom sized dining room can be accessed either through the main entrance (turn right towards the cloakrooms and the entrance is on your left) or through the door on Davies St. It's all a bit Alice in Wonderland as you step through a tiny dark doorway, leading in turn to a theatrical vestibule which leads into the new-look dining room.

While the main bar at Claridge's is always a lovely spot, what you need to do is arrive earlier than the rest of your table to allow enough time to perch in the small but perfectly formed bar inside Fera. It's off to the right alongside the street and lined with illustrations by the hotel's in-house illustrator David Downton. The cocktails here have been devised in close collaboration with the kitchen. From the seasonal collection we had pea shoots with apple marigold and vermouth and the Fera take on a gin fizz with pear and honey shrub and sweet cicely (both £15) which went down a treat particularly with the early appetisers.

And where should l sit?

Tricky one this. There's a central dining room and then, raised up - where there were private rooms before - is a new section of seating by the windows. We were here by the railing looking out over the dining room and thought we had one of the best tables in the house. There are several large tables for groups and some cracking banquette tables looking towards the door if you want to people watch. And the private dining room here seats 12 if you're interested in your own space.

Do we have to have a tasting menu?

There is a three course lunch with four choices for starters and mains and three for dessert which costs £85. The next step up is the shorter tasting menu which costs £95 for ten plates. And then, there's the full tasting menu for £125 for 17 plates, which is what we went for. At lunch it took us four hugely enjoyable hours to experience it (yes we did have to go home and have a lie down afterwards) so book for an early table for lunch or dinner if this is what you're planning to have.

What kind of food should I expect?

If you've eaten before at L'enclume, The French or Roganic you'll have a rough idea of the kind of food you'll find coming out of a Simon Rogan kitchen. For the full tasting menu we had wave after wave of exquisitely crafted dishes - some just a tiny mouthful, others more substantial as we progressed to the 'main course'.

While dishes will change depending on the season and what comes down from Rogan's farm in Cumbria - on a tour of the kitchen afterwards we spotted chefs pouncing on a new delivery with unbridled enthusiasm - here are some of our favorite dishes. You can see the full menu in the gallery below.

At the lowest end of the list you can have a glass of wine for £8 or you could go crazy and pick the wine matching for an accompanying £110 which starts and ends with champagne and includes the most astonishing wine we've had in a long time - Arbois 'Fleur de Savagnin' from Jura. Other highlights included a Soave which made us reconsider that rather unfashionable wine. Our sommelier did a sterling job diving in to to explain the wines as waiters swooped down to deliver the next course.

And of course, being a British restaurant, it's not just wine you should consider. There are 11 beers on the list, all from London including Kernel, Redchurch and Partizan and ranging in price from £6 to £9 as well as a cider and perry from Herefordshire.

No expense has been spared to bring this beautiful British restaurant to fruition. From the entirely gutted and reworked dining room to the extraordinary attention to detail in every dish that leaves the kitchen this puts Claridge's up in the upper echelon of London's fine dining rooms.

But, and it's an important caveat, this is not a stuffy dining room. Yes you'll be looked after very well. But this wasn't one of those places where people sit, awed by the food and service, snapping away silently with their SLRs. This is a very modern restaurant, with fresh styles of service and some of the best food you're likely to enjoy in London. Expect it to be pretty darned difficult to get a table here any time soon. .

Prices were correct at time of writing. Hot Dinners ate as guests of Fera at Claridges.