[SIGPLUS_EXCEPTION_SOURCE] Image source is expected to be a full URL or a path relative to the image base folder specified in the back-end but /blog/2013/coalvaults/gallery is neither a URL nor a relative path to an existing file or folder.
0
Shares 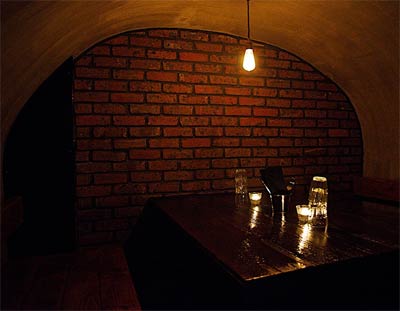 What can you tell us about the Coal Vaults?

It’s a new restaurant built in a 19th century coal vault in the heart of Soho serving small plates and cocktails, with a lively bar atmosphere, stool seating, low lighting and plenty of exposed brickwork . However, what really sets it apart is its entertaining drinks menu, where you can see some pretty imaginative ingredients for a cocktail bar, like yoghurt, fried tea or Szechuan pepper.

What kind of food is it?

The menu is based around small, seasonally-inspired dishes, with some good flavour combinations like rabbit with sweetcorn and pineapple relish, or quail with saffron, orange and walnut. Several more traditional dishes also appear, like heritage tomato salad with mozzarella, or antipasti with home pickles, but it's mostly focused on seasonal fare, so as we move into October you can expect to see mushrooms and other autumnal ingredients making an appearance.

So what about the cocktails?

This is where the Coal Vaults really shines, with the cocktails as seasonal and lovingly-tended as the food. Owner Martyn Simpson, or Simo, explained that Coal Vaults infuses each of its liquors in-house, which means their drinks are fresh, strong, and pack a fair wallop, and all cost under £10.

Hot Dinners couldn’t resist sampling the Manhattan Spring, made with chrysanthemum vodka and dried kumquat bitters, which was sharp, heady, and easily our favourite. We also loved the Mercury, with homemade Greengage sorbet and Prosecco, as well as the crowd-pleasing Marano, made with Sicilian liquor, blueberries and served with a glass of palate-cleansing fizz and lemon. If you want to live a little dangerously, try the Beggar, the drink that will “really screw with your mouth” (according to the barman) with parsley, yoghurt, honey and vodka.

Where should I meet friends for a drink beforehand?

Try the newly-opened Punch Room bar at the Edition Hotel on Berners Street, where you can sample a variety of heritage punches while soaking up the plush, member’s club vibe in oak-panelled luxury next to an open fire.

The Coal Vaults is beneath Wardour Street in Soho, so almost as central as you can get, and easily walkable from Oxford Circus, Tottenham Court Road, and Leicester Square. It’s an exceptionally convenient location to grab some dinner before hitting the West End, and so bound to be popular on weekends.

The menu does change with the seasons, so bear that in mind, but if you go in the next few weeks, we loved the homemade sausage with juniper and smoked sea salt, served with sauerkraut, (£5), which was a deeply savoury dish with rich, crumbly pork that melted in the mouth and a strong enough flavour to stand up to the equally-strong cocktails. We were also recommended the pulled rabbit, (£8.50), which was tender and soft, arriving as a very generous portion heaped on top of flatbread and served with black beans and a sweet relish.

The shoulder of lamb (£9.50), cooked for five hours in hay and lavender and served with smoked anchovy couscous, had a perfect texture, but lacked the powerful flavour we’d expected and could have used a little more punch. Likewise, Bombay chips were like posh potato wedges with chutney and yoghurt dip, and were good to warm up with, but could have used a bit more seasoning considering the intense flavours of the cocktails.

Dessert-wise, there’s only three to choose from, but the flourless sea salt chocolate cake was moussey, rich and everything a chocolate cake should be, served with a dollop of with zingy mint crème fraiche and caramel toasted almonds. We also loved the cakey and delicate Earl Grey bread with vanilla butter and house jam.

If you’re after a good energetic atmosphere, seats near or on the bar, or in the back facing the open kitchen guarantee a buzzy environment where you can watch chef James picking basil garnish and plating up, while if you’re feeling a little more private, there are several sunken booths set into the walls of the vault.

It’s only been open since the start of September, but the Coal Vaults seems to be nicely upholding its reputation as the cool new kid on the block. It’s trendy, ambitious, with a little zany - aside from its eyebrow-raising cocktail list, there’s a skeleton wearing a Big Lebowski teeshirt relaxing on a gold chair to welcome you as you descend the stairs. Appealing to a younger crowd in an easily-reachable location with an affordable menu, it's likely to do well.

Coal Vaults is at 187b Wardour Street, Soho London W1F 8ZB. To book, go to their website.

Prices were correct at time of writing. Hot Dinners was invited to eat at Coal Vaults.