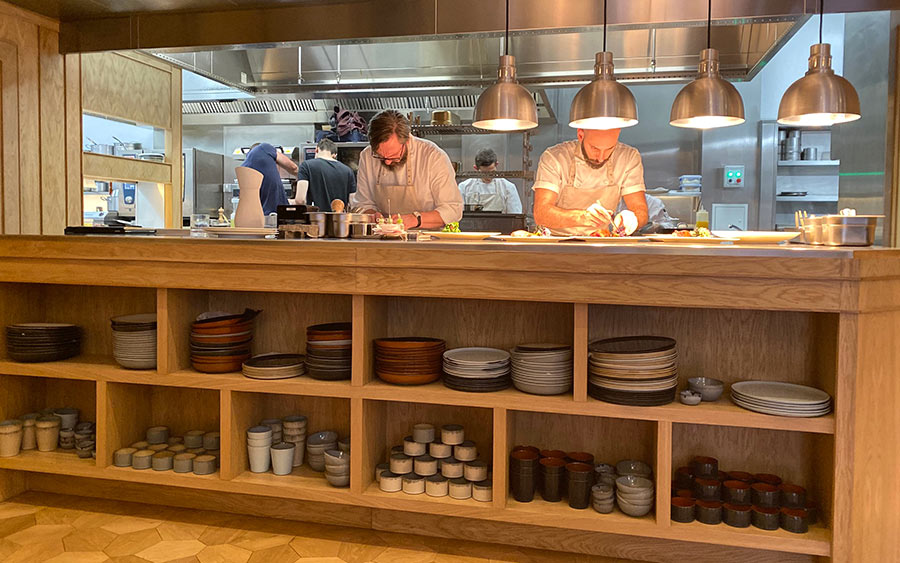 At work in the kitchen of Trivet. We have to admit, we spent a lot of the meal coveting their beautiful crockery...

What can you tell us about Trivet?

In the course of its creation, Trivet has become something of a home for Fat Duck alumni in London, with many of the people involved having worked at the famous Heston Blumenthal restaurant.

Joining them are Michele Stanco as head chef and Melissa Fergus as the restaurant manager. And even more of the team have also spent time in Bray. So it really is like a Fat Duck reunion has come to town - in terms of people anyway.

But Trivet is very different from The Fat Duck?

Absolutely - while The Fat Duck is all bells and whistles and a special occasion type of restaurant, Trivet fits much more into the style of contemporary cooking that London is particularly good at. That is - they're doing extremely creative things with seasonal ingredients in a more laid-back environment. 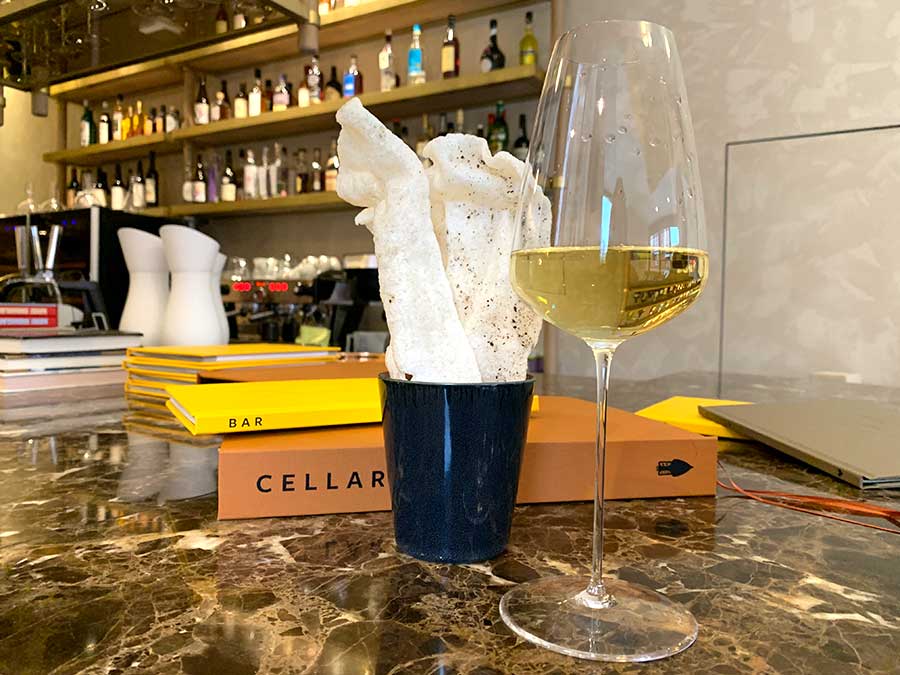 At the bar - with the bar snack of celeriac and white cardamom crackers (£3.50) - a perfect drinking snack. You can see the wine tome in the background.

They've taken over the space left by Londrino in Bermondsey - about a five minute walk from London Bridge station. The room has been brightened somewhat as well as being opened up a little, with the open kitchen at the heart of things.

One easy recommendation is Nine Lives, a nearby cocktail bar that also features on our Best Bars in London list. Personally, we're also very partial to a drink in The Rose, which is just a few steps away from Trivet - right now it's our pub of choice in London Bridge. But it's very different from Trivet - so if you want something in the same vibe we think your best bet is actually getting a seat by the bar area in Trivet itself.

Even if you're not staying for dinner, we think the bar is well worth checking out. They have a separate bar menu which looks like it's worth a trip alone. Apart from the excellent celeriac crackers (see above) we'd happily stop by for "Fried polenta with Gorgonzola and grated Wiltshire truffle (£8.50)" or "confit and fried chicken withs with wasabi mayo (£8.50)". There are even larger dishes like ribeye with fires available here too. And you'll also have time to go through the enormous wine list (we'll get to that in a bit). 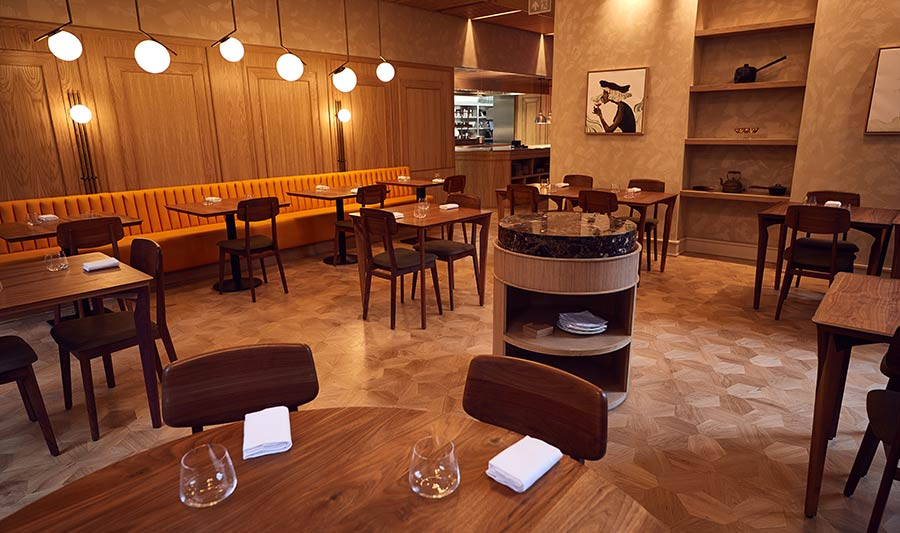 The back room at Trivet - with windows on two sides it's still very bright.

The room is split into two parts - and we definitely prefer the first part that contains the open kitchen. We loved our table - right in front of the kitchen where you can see everything being brought out - but we like being near the action anyway. If that's not your type of thing, a seat by the window is also good. Tables are well spaced apart so there's no problem if you're here for a private chat over your dinner.

The menu is a standard three-course affair, and there's a particularly strong list of starters that gave us some trouble when it came to choosing. You'll get some hen gymro (an ancient Welsh grain) bread with kefir culture butter on the table too - you'll be needing that bread for mopping up some of the sauce. Prices in the main restaurant are definitely on the high side, as you can see below, so bear that in mind. There isn't a set menu option yet, but that could well come in later when they're more bedded in.

Here's what we had on the day. 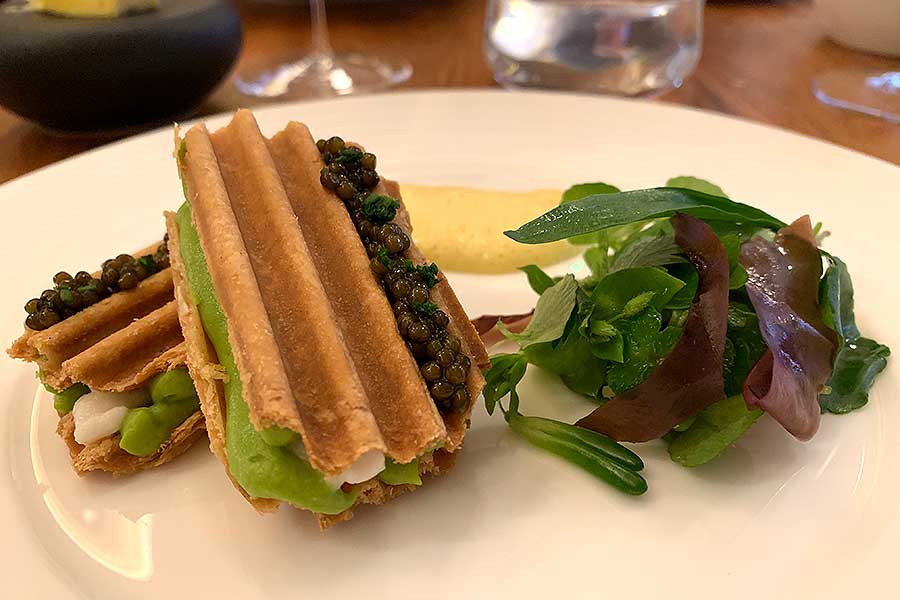 Sour cream and onion Puffini, caviar and mirin sabayon (£21) - using the panini machine that was left in the restaurant when Londrino departed, this 'puffini' - their own made-up word - is a filo pastry toasted sandwich filled with pea puree. 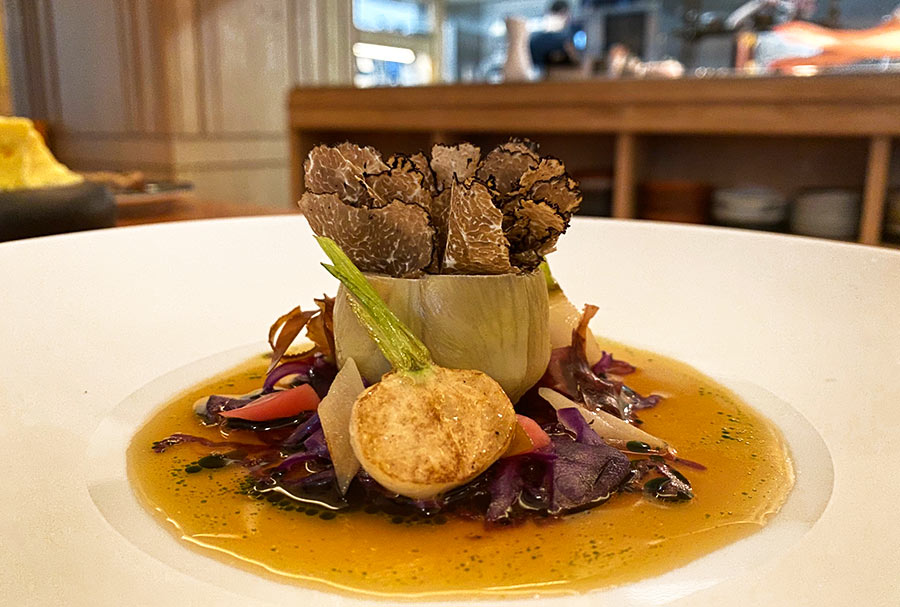 Artichoke, sourdough broth and autumn truffle (£16) - beautiful looking dish for sure, but we did think this needed a little more oomph on the taste front. 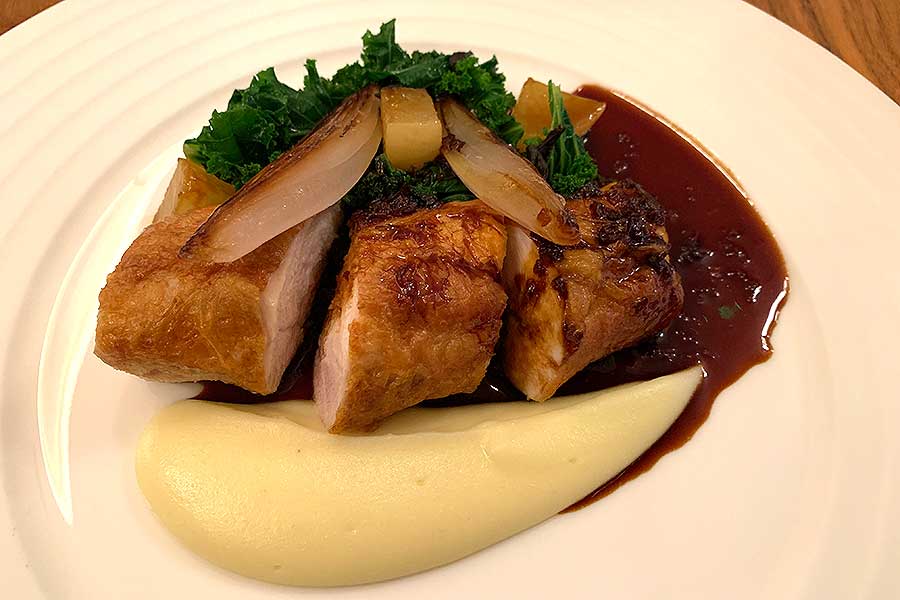 Chicken with a vinegar sauce (£29) - definitely a contender for best chicken dish of the year, this is one of those simply described dishes that packs layer upon layer of flavour. 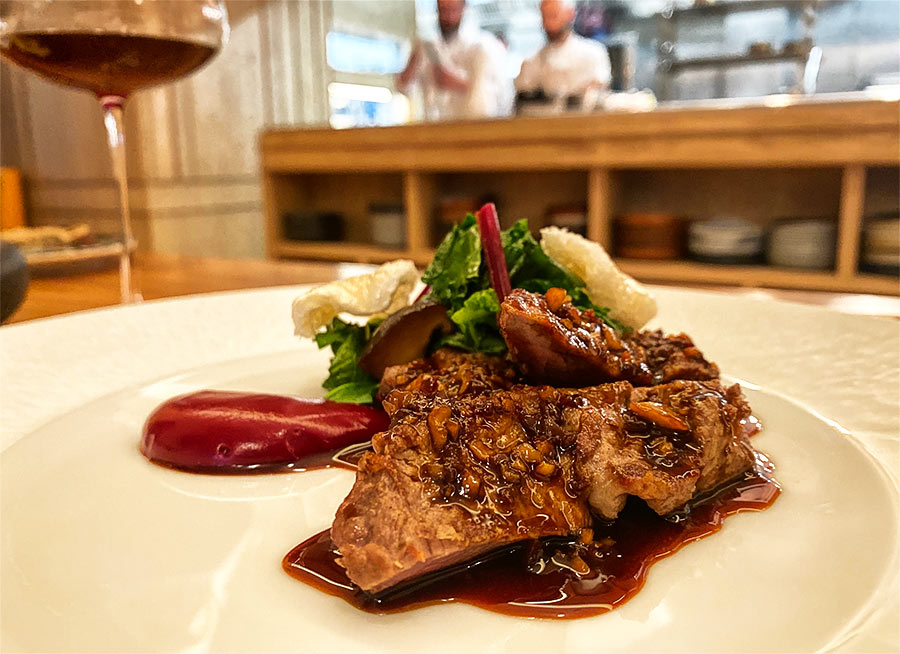 Iberico pluma, beetroot and shiitake mushroom (£35) - a hugely enjoyable main course with a generous amount of pluma. Make sure you keep some of the bread for the sauce which is phenomenal.

Is there anything else worth highlighting?

We can't try everything - but there were a couple of dishes that we came close to ordering after seeing on Instagram, it's definitely the top two from this pic, courtesy of Bloomberg's Richard Vines (top left is "Dante’s Pici Pici pasta, red mullet and artichokes" and top right is "Roast pigeon, persimmon and chervil root"):

It's certainly worth ordering at least one dessert as the Hokkaido Potato below is becoming the signature dish for the restaurant... 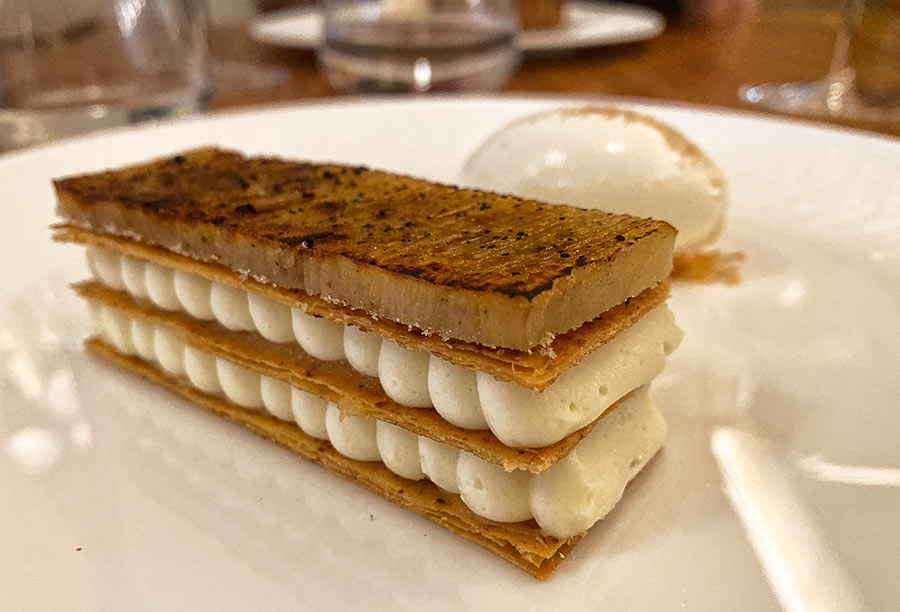 Hokkaido Potato - Baked potato Millefeuille, sake and white chocolate mousse, butter and sake gelato (£14). Yes - that's potato and chocolate in their twist of a dessert. An astonishing creation although we have to be honest - the sake gelato divided the table somewhat. 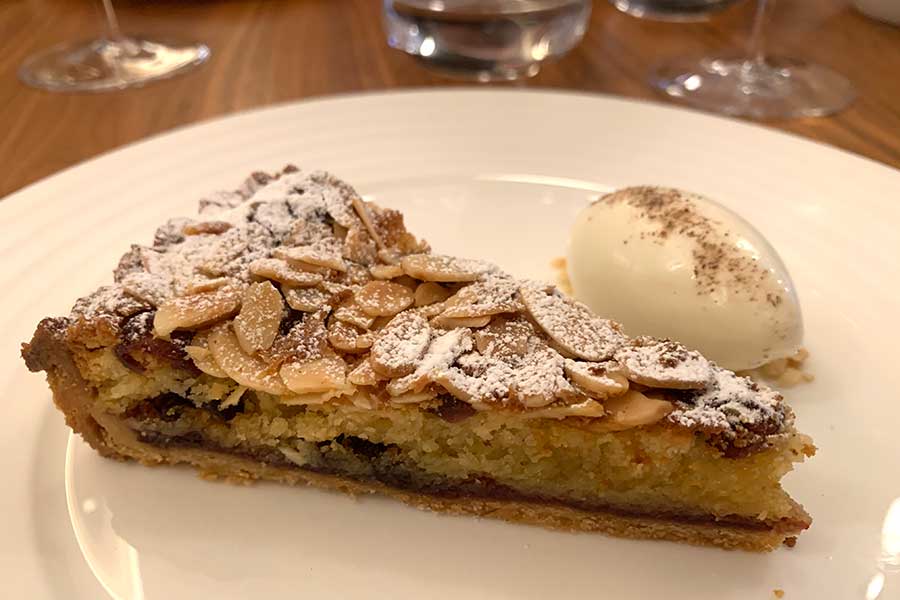 Almond and cherry tart with cardamom gelato (£12) - apparently there will always be a tart of some kind on the menu, which will also be on the bar menu. This tart was up there with the best we've had, a truly excellent chewy tart which shows real talent in the pastry section. If you're just passing by, you owe it to yourself to pop in and grab one for yourself. 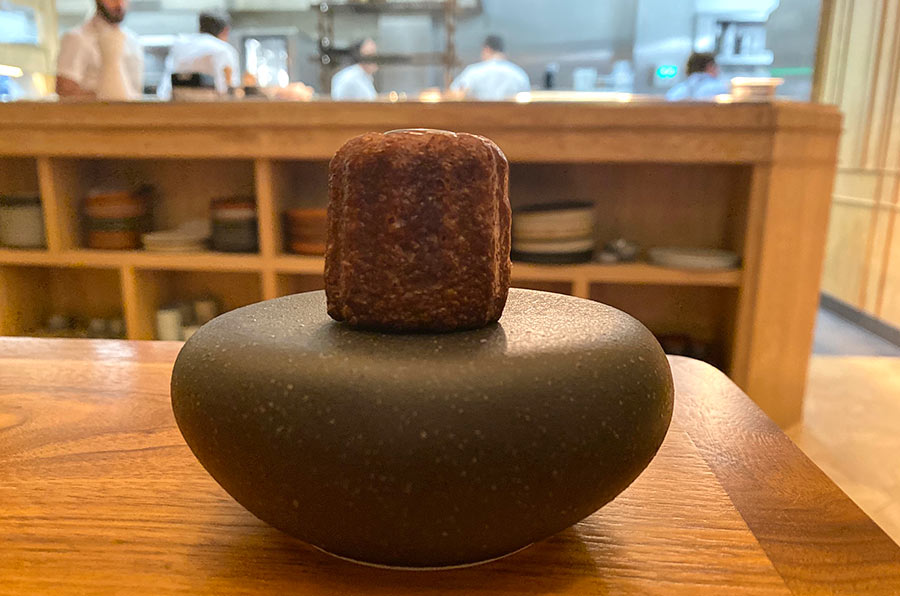 As we were there for lunch, we stayed for coffee which came with this canale to finish everything off. It's topped with local honey, which improves it further.

Obviously, with Isa Bal behind the wine list (or should that be book?), you'll want to pay close attention to the wine on offer. It's also arranged in a unique way - arranged in terms of the history of the wine. So the list starts off at 7000BC with wines from Georgia, Armenia and Turkey and moves through the centuries up to 1550AD where America and Australia/New Zealand are brought in. That also shows the breadth of the list - there are plenty of wines from Georgia, Lebanon, Syria, Cyprus, Slovenia and more - areas which aren't often given great coverage in London wine lists.

Keep an eye out for the handy symbol guide - which will help you easily identify organic, vegan, biodynamic, skin contact and "Funky/challenging wines" if you're on the lookout for them (or want to steer clear). We also liked the handy use of alcohol volume on the German wines to help identify the sweeter wines in that section.

The entry price for wine is £28 and they have 100 wines on the list that are under the £50 mark. In all sections (and there are a lot of them), there's something around the £35 mark so it's possible to really explore the list without it severely damaging the bank balance. So it's a really good wine bar option if you're in the area and want to try something new. In all, it's a fascinating list - and well worth heading over to Bermondsey to put it to the test.

We thoroughly enjoyed our meal at Trivet, which feels like it's delivering something new and unique to London - and there's certainly nothing like it at all in the surrounding Bermondsey and London Bridge area. Here you'll find inventive food and a room that's very well run by a team that learned the ropes at one of the UK's top restaurants. All this backed up by a wine bar with a wine list that's both interesting and accessible.

We'd definitely recommend booking the restaurant, but if you want a tester visit first then a trip to the bar is an absolute must.

Hot Dinners ate as guests of Trivet. Prices are correct at the time of writing.

Where is it? 36 Snowsfields, Bermondsey, London SE1 3S