[SIGPLUS_EXCEPTION_SOURCE] Image source is expected to be a full URL or a path relative to the image base folder specified in the back-end but /blog/2014/pullman-kerridge/gallery/ is neither a URL nor a relative path to an existing file or folder.
0
Shares 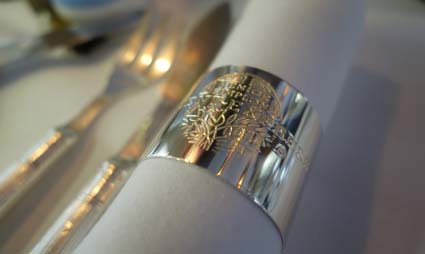 It's a steaming hot night in July but we're standing in a room beside Platform 2 at Victoria in full black tie. There's champagne on ice, plates of teeny canapes doing the rounds and The Hand and Flowers chef Tom Kerridge is working the room. Travellers heading home after a day in town are looking at us, slightly agog.

This is how an evening on the British Pullman or Orient Express starts. We're here because the company this year launched a series of culinary journeys - dinners featuring top chefs. So far they've had Raymond Blanc, Marcus Wareing and Tom Kerridge. Next up is Tom Sellers and later on, James Martin and Anton Mosimann.

Each evening has room for just 100 people dining. Kerridge brought his team up from Marlow for the evening and over the course of the next five or so hours, they worked like demons out of two kitchens at either end of the train, while we took a scenic tour of the South Coast.

Memories of a more refined era

The Belmond British Pullman is sister train to the Venice Simplon-Orient-Express. It's made up of a series of 1920s art deco carriages, staffed with liveried waiters evoking the kind of times-gone-by train travel that has you keeping an eye out for Hercule Poirot. Our carriage was Audrey, which back in 1940 had actually been damaged in an air raid here at Victoria. Immaculately restored, with intricate marquetry, it used to be part of the Brighton Belle pullman train and has played host to numerous members of the royal family.

Catching a moment with Kerridge before we board, he explained that the past few months had seen his team develop a menu that would work with the practical constraints of the train's kitchens. His chefs would be cooking alongside the train's regular kitchen staff.

If you're worried that you'd have to share a table with someone you didn't know, fear not. Most of the carriages are laid out in tables of two. But if you did have a group, you'd benefit from being in one of the private compartments laid out for four, which looked like a lot of fun.

The evening's menu by Tom Kerridge

Our dinner kicked off somewhere on the South Downs with chilled cucumber gazpacho with cucumber flowers, paired with a glass of Hush Heath's Jake's Orchard nettle cider. This was followed by chilled mackerel escabeche, braised new seasons lamb shank served up with a pea and lamb ragout, pickled girolles and an incredible intense salsa verde.

Service was measured - giving everyone enough time between courses to enjoy the scenery outside. As the light slowly faded we hit the south coast, moving slowly along the beach at Whitstable as the cheese course was served. Then it was back, at a brisker pace, to London, but with time to enjoy an incredible summer fruit fool with toasted granola and a pink peppercorn shortbread.

Each course came matched with wines, and as we slowly approached South London there was just enough time for coffee and petit fours.

Dressy and rather special

As you might imagine, this kind of evening out isn't cheap. Our evening was £495 per person - so a lot of the people there were celebrating some sort of special occasion. But it was fun to get dressed up; lovely for once to enjoy the getting there rather than the destination and all while enjoying food courtesy of one of the UK's great chefs. Getting home from Victoria on the tube afterwards felt like a massive demotion. All in all, this would make a lovely present for a foodie with a special birthday or anniversary approaching.

Tom Sellers will be on the Belmond British Pullman on 10 October and James Martin on the 23 October. Anton Mosimann will be cooking on 13 November. To book call 0845 077 2222 or visit www.luxurytrainjourneys.com

Hot Dinners ate as guests of the Belmond British Pullman. Prices were correct at the time of writing.