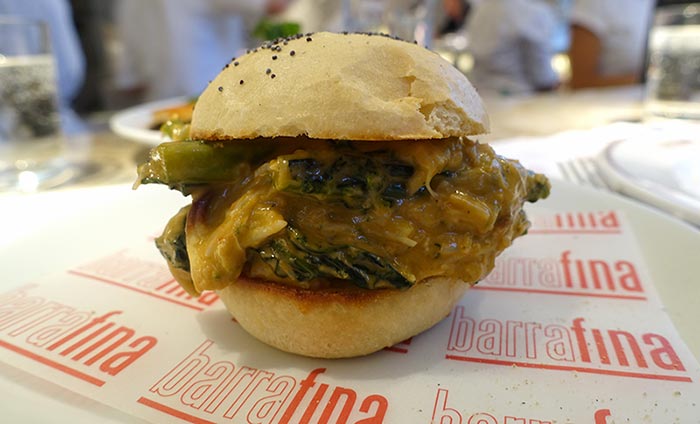 What can you tell us about Barrafina?

Barrafina is the crown jewel in the Hart Brothers' empire - who also own Quo Vadis in Soho and, until recently, Fino in Fitzrovia. The original was always known for its stringent no-bookings policy; that carried on to the second restaurant which opened a year ago on Adelaide Street. Together, these restaurants have built a mighty reputation for being the best Spanish restaurants in London (and - whisper it - perhaps bettering many in Spain). A lot of this comes down to Executive Head Chef Nieves Barragán Mohacho who led Barrafina Adelaide Street to the No 1 slot in the recent National Restaurant Awards. So there's a great deal of anticipation riding on their third venture.

It's at the top end of Drury Lane, on the corner of Broad Court and a few steps from Long Acre. Either Covent Garden or Holborn are your best best for tubes.

And there are still no bookings?

Absolutely - and don't expect any favouritism - it's strictly first come first served - but there is a standing space behind the diners' stools where you can grab a drink and snacks while you wait. We were - VERY - lucky to be invited to the preview event which gave us a distinct advantage - but even Fergus Henderson was left waiting for a seat later on in the evening.

You're really asking? Wherever they put you. And be thankful.

Like the other Barrafinas, this is all about counter dining - watching your food being prepared while working out what you're going to have next. This space seems a little more airy on the inside thanks to a tall ceiling - and there's an impressive private dining room downstairs which features its own kitchen and seats a further 28. Book a party here and your friends will love you forever.

It's also worth knowing that they're hoping for some outside seating too - a first for Barrafina. During summer, these will be THE tables to get.

Without exception, the food is exemplary. And although the prices can rack up if you get carried away, we think that price-wise it compare pretty well with other Spanish restaurants in London, particularly when you take into consideration the huge leap in quality you get at Barrafina.

One thing to note if you've recently been to Barrafina Adelade Street - the menu is almost completely different at Drury Lane, so picking out the "new dishes" is almost impossible. Simply put, you could go to both restaurants and have a completely different experience. Obviously some classics, like tortilla remain, but generally you'll have a whole new menu to play with.

And because that menu is HUGE, there's plenty of opportunity for return visits. We ate as much as our stomachs could take, but there were still loads that we'd come back for. Of the dishes we tried - we think the best were:

We also tried some of the Violet Prawns that were on the specials - it's well worth a look at the fish of the day to get the freshest plates possible.

There's a hefty selection of sherry on the menu. We finished off with a semi-sweet which was perfect with dessert, but forgot the name. It was recommended to us - so you'll have to get a recommendation too. As for the wine - it all starts at the £19 mark for the El Circo 2014 white, but we'd recommend the Txakoli (£6.50 a glass), The Flower and the Bee (£7 a glass) and the own Hart Bros Albarino (£8 a glass). If they sold that last one to take away, we'd buy it on the spot.

The latest Barrafina was always going to be good and with all three offering significantly different vibes and menus, there's more than enough room for all of them. Don't expect the queues to get any smaller as this deserves to be just as popular as the others - but be safe in knowing that there's a damned fine meal waiting for you when you eventually get that seat.

Hot Dinners were invited to eat at Barrafina. Prices are correct at the time of writing.