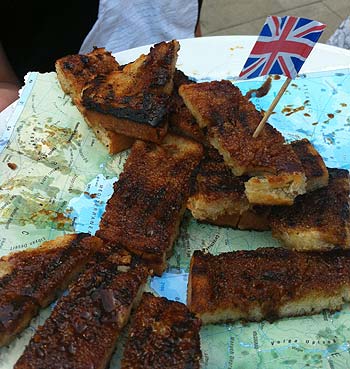 With the Olympics upon us, we decided to throw ourselves into the spirit of things and head across to the centre of The Games, Stratford, to attend an Olympic dining experience.

Kerstin Rodgers (aka MsMarmitelover) invited us to the preview night of what will be a 20-night residency at Stratford's Old Town Hall, where supperclub chefs will be cooking their signature dishes from around the world for up to 80 guests a night. The non-profit series of events were set up as a response to the Olympics. Ms Marmitelover told us "London is the most diverse place on the planet, a multinational melting pot, with some of the most talented cooks in Britain". We couldn’t agree more.

Guests got to view the intricate worldscape made-to-scale table, whilst drinking cocktails courtesy of Courvoisier, who will be supplying the welcome cocktail at each event. We chose a refreshing mix of cloudy apple, ginger beer and Courvoisier, too easy to drink on a sticky summer night.

We were treated to tantalising taste of what’s in store for diners in the coming weeks with many of the supperclub chefs presenting their own dishes. Highlights were East Africa with Queen scallops with samphire, chilli and coriander on coconut rice while Sweden served Kalix Bleek roe with fennel flower, sour cream and red onion. England was naturally represented by Marmite on toast made by the host (homemade sourdough no less).

However, bronze went to China for Cherry Smart’s soft boiled egg marinated in soy with salmon roe mixed into the yolk "It's a street food favourite and reminds me of my childhood" she confided. The roe almost disappeared into the bright, delightfully undercooked yolk and had that salty, fishy taste that made us yearn for a childhood in the Orient.

Silver went to Goz, who was representing Singapore and his supperclub Plusixfive with sticky ricecakes and preserved turnip, which he told us is a staple breakfast option in his hometown. He confessed to Hot Dinners he may be leaving the country soon, so his next  dinner on 4th August should not be missed.

The winning dish for us came from the opposite corner of the globe, New Zealand. Anna Hansen from The Modern Pantry teased us with crispy, moreish smoked mussel fish fingers with a seaweed tartare sauce. We hogged the plate until we got stern looks from other diners.

The real feasts will each night will take diners on a journey of dishes from around the world, starting with a West African raw vegan feast and suitably finishing on the 13th August in Rio, the next host city of the Olympics in 2016.

Whether you have a penchant for Persian or a taste for Thai (see what we did there?), there is a night to suit everyone’s needs.