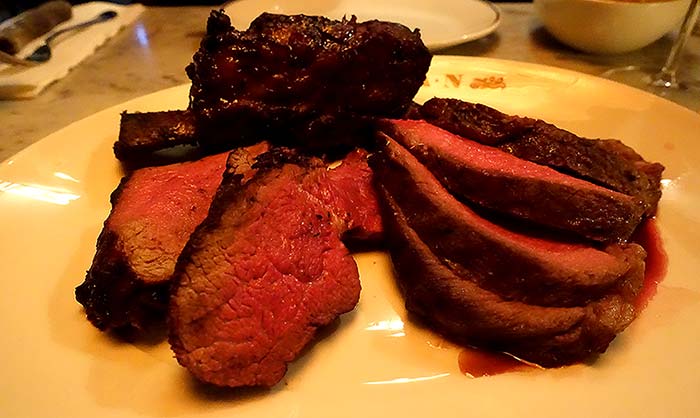 What can you tell me about Zelman Meats?

First we need to mention what it's replacing - that is, Rex & Mariano, the Goodman group's grand experiment of an affordable, seafood restaurant in Soho. It had been one of our favourite restaurants of the year, but the demand wasn't there and something had to change. So Rex & Mariano closed (hopefully re-appearing in another guise soon) and just two weeks later, Zelman Meats rose from its ashes.

Realising that the restaurant was created in two weeks is pretty impressive. While you can see elements of the structure of R&M, this is a very different beast indeed. It's much darker and industrial and a host of red leather booths have been brought in. Plus there's now a standaone bar at the back of the restaurant which will be serving a smaller separate menu soon (expect a burger).

Ideally grab one of those aforementioned booths, good both for smaller and larger groups. Definitely the best bet, we think.

So what about that meat?

There are three cuts of meat on the ever-changing menus (all the food is written up on blackboards) and specials are added to that. When we visited, there were three cuts on there - sliced picanha at £6 per 100g (also known as rump cap and a popular Brazilian cut), sliced chateaubriand (£9 per 100g) and smoked shortribs at £12 each.

Any of those on their own would be great but we strongly recommend you do what we did and order some of each. Opinions were divided on the table as to which of the sliced cuts were better - but both were cooked perfectly with a decent hit of smoke to them. And the shortrib was so good we definitely should have ordered more than one.

So in summary - the beef is excellent and those prices are very keen for high quality steak.

But it's not all about the beef?

Indeed not. Harkening back to its predecessor, there's seafood for starters in the shape of oysters (fresh or baked) and the famous (and excellent) red prawns from Rex and Mariano are still on the menu at £12.

And it's worth pointing out that the sides are also very good. Definitely don't leave without trying the mash potato with roasted garlic and onion (£6) - it is amazing - and the black truffle and parmesan chips (£8) are pretty good too. Both come in large portions. If anything, our one regret was that we really should have had the chopped salad as well - just to offset the carbs and protein. But it's a very, very small regret.

The dessert of apple pie and ice cream was also good - but probably one to consider sharing by that point in the meal.

There's a great cocktail list to kick things off - the St Lawrence was hugely drinkable and we've had the Hulk Smash recommended to us too.

But it's really the wine - with a focus on red - that you'll want to pay more attention to. There's plenty by the glass - including some on tap starting at £4 per 125 ml (you can have multiples of that "with no limits") but we opted for a bottle of Californian red Zinfandel from Sobon Estate for £42. There's a wide range available here - from £35 - £100 max on the main list, so it's good for all budgets. Or if you want to go a little further, the "legends" section goes up to £480.

Already fairly heaving on a Thursday night, we think Zelman is going to be the huge hit that - slightly tragically - Rex and Mariano was not. It seems well pitched between the starter steakhouses like Flat Iron and the higher end like Goodman and Hawksmoor - with a good balance of affordable steak and good wines. We left with a slight (but welcome) case of meat sweats, immediately planning a return visit and can easily recommend it.

Zelman Meats is at 2 St Anne's Ct, Soho, London W1F OAZ. Find out more from them on Twitter @Zelman_Meats

Hot Dinners were invited to Zelman Meats. Prices are correct at the time of writing.