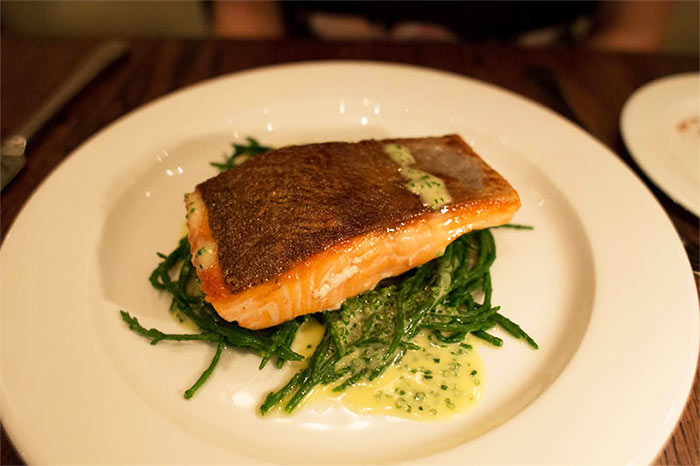 What can you tell us about Wright Brothers South Kensington?

It’s the latest opening from the Wright Brothers, a restaurant group which has carved out a name for their excellent ‘Sea to plate’ seafood establishments in Central London. Even if you’ve never eaten in one of their restataurants, there’s a good chance you might have tried some of their produce - their oysters appear on a wide range of menus across London.

This fourth site in South Kensington is much smaller than other branches in Soho, Spitalfields and Borough Market and is the group's first attempt at creating a restaurant which focuses on neighbourhood dining.

A feature which we quite enjoy from other Wright Brothers branches is their dedication to bar dining. Customers are invited to perch at the bar, enjoy an aperitif and a plate of oysters. This is made even more attractive with their £1 oyster happy hours, which run early evenings throughout the week. Terrific value for oysters of this quality.

South Kensington is the first of their establishments to have a standalone bar. The Mermaid bar is a secluded subterranean space that also doubles as a private dining room and is open from Wednesday - Saturday. You’ll find a unique list of 11 entirely nautical cocktails to start on including ‘Fish Tail’, ’The Shipwreck and ’Sailors Ruin’.

The layout and feel of the restaurant feels quite deliberately ‘Parisian bistro’. It’s a narrow site packed equally with intimate tables for couples alongside those for groups up to six, but not too many more. If dining in a larger group, we strongly recommend booking in advance.

And what stood out on the night?

You came to eat at Wright Brothers and so you must have oysters. Here they come in a dizzying array of varieties and preparations. 6 or 12? English, French or Irish? Dressed? Japanese, Kilpatrick, Champagne or fresh? Thankfully, staff here are well versed in the lore and language which surrounds these salty delights, let them guide you through the best combinations. Tuck into a dozen or so of these (they start from £16 for 6 and £32 for 12) and turn the page to mains.

As you might expect, fish is inevitably the order of the day here. Whole lemon sole, served off the bone with a butter sauce and scattering of crab and cucumber (£21.50) was perfectly cooked and just the right side of sumptuous. The sea trout on a bed of samphire and dressed with chive beurre blanc (£19) was a very well executed dish, perfectly cooked trout sandwiched between its crisp skin on top and crunchy samphire at the base. No sides were required.

The axiom of 'white wine with fish’ doesn’t apply as much as you might expect at Wright Brothers with a relatively balanced list of crisp whites and light reds with a good selection available by the glass and starting at £5.50. Bottles start at £21 with nearly 30 of these priced between £25 and £45.

So often, seafood restaurants are seen as an 'also ran' in the London dining scene. Cast into the shade as flash meat emporiums steal the limelight. Wright Brothers consistently prove that seafood also deserves its place in the sun, the produce here is of an unmistakably high quality and the oyster experience is unrivalled.

The team has taken a bold step in opening a staunchly British restaurant in the heart of a stridently French neighbourhood, but judging by the queues out the door and number of French-speaking tables around us, we feel that South Kensington is sure to follow the success of the rest of the group.

Hot Dinners were invited to eat at Wright Brothers. Prices were correct at the time of writing.