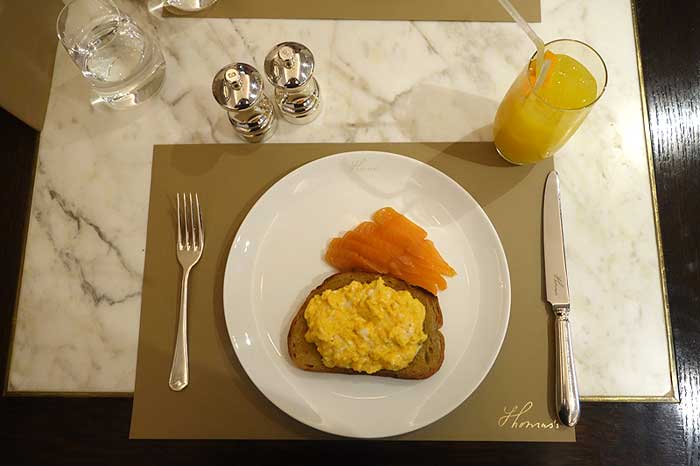 What do we need to know about Thomas's Cafe

This swoonsome new restaurant opened very under the radar back in June, offering a very British menu over two floors of Burberry's flagship store on Regent Street.

You can access it through the store on the ground floor of Burberry's on Regent Street, or via its own entrance on Vigo Street.

This is a hard one. Apparently the first floor space is very popular, due to loads of natural light and a very nice looking bar. But we rather liked the ground floor, particularly where we were sat, beside a roaring fire.

What should we have to eat?

During the day and evening (the restaurant is open until 10pm, but you have to have entered it via the store before 10pm. It's a licensing thing and something they're working on) there's a lovely menu that we'd have eaten pretty much anything on - think bridge rolls with rare beef, lobster and chips, Sutton Hoo chicken salad. But we were here to try the new breakfast menu which has just launched.

We kicked things off with some of their homemade English crumpets - which really were freshly made that morning - slathered with Netherend butter and a toasted teacake (both are made in the restaurant's Aga) which came served with a fabulous duo of jams - the gooseberry and elderflower one was our favourite.

Neither of us wanted to cede to the other on the scrambled Barradale eggs, so one of us had it with Eastleach bacon (£9) and the other with a generous serving of Hansen and Lydersen London cure smoked salmon (£13). Both came served on buttermilk toast.

Drinks range from a selection of Lalani & Co Tea (2009 Paksong Estate with Calabrian Bergamot oil anyone?) to Monmouth coffees and fresh juice.

We're actually pretty reluctant to share this with you all. Thomas's Cafe is a super find - handy for shoppers but done with such loving attention to detail and thought for provenance and seasonality that it rises above most store cafes. And now that it's open for breakfast, there's every reason for you to stop by at some point during the day to check it out.

Prices were correct at the time of writing. Hot Dinners ate as guests of Thomas's Cafe.