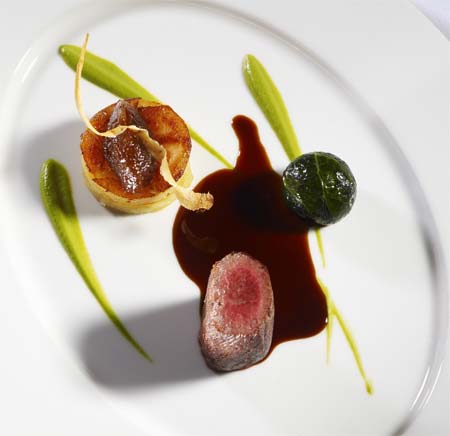 In tandem with general manager, Debrah Dhugga, chef Nigel Mendham has brought the restaurant at much-loved five-star, Duke’s of St. James up to the standard of its attendant bar. It’s long been a favourite on account of its balanced but - if you’re not watchful - unbalancing martinis.

Following a couth spruce, Thirty Six now has its own entrance at 36 Little St. James Street a dapper saunter from London’s oldest wine and spirits merchant, Berry Brothers and Rudd.

Thirty Six has the feel of an exclusive but friendly member’s club. Walls painted in Farrow & Ball are lined with a thick dado of prints and paintings accrued over many years. Combined with well-spaced, linen padded tables, cosseting tangerine chairs and well-groomed staff, this is a dining room from which you won’t want to dart back to reality. A set for celebrations, long-lasting catch-up lunches and even proposals.

Where should I meet fellow diners for a pre-dinner drink?

What would you recommend ordering?

Mini loaves, scented like brioche and bouncy to the touch come with custard coloured butter. These are warm and sliced to resemble outsized woodlice in appearance.

What's the cheapest wine I could get away with?

Try the clafoutis with golden cross apple woven into Mendham’s take on a Waldorf salad.

Find out more about Thirty Six

Prices are correct at time of writing. Hot Dinners was invited to eat at THIRTY SIX by Nigel Mendham