Test Driving the classics at Hibiscus 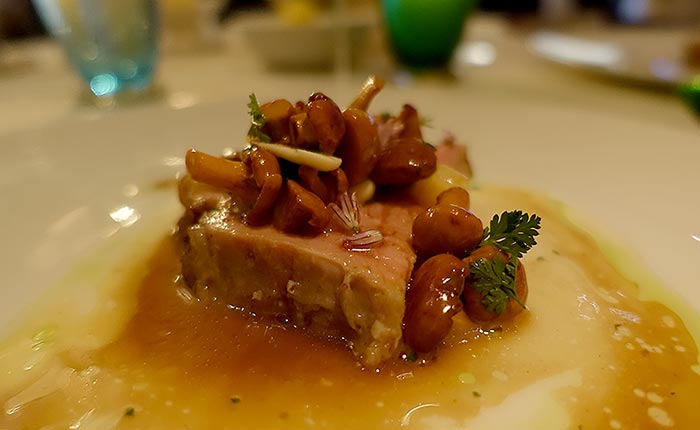 What can you tell me about Hibiscus?

Having been awarded with two Michelin stars, it's a restaurant that belongs to a very small club in London (just nine). It's fine-dining French cuisine, led by chef Claude Bosi. The restaurant is currently celebrating its 15th anniversary, having originally opened in Ludlow before relocating to Mayfair in 2006. They've made previous editions of the World's 50 Best and won many, many plaudits. We've never actually been for a full meal there (having popped in once during a London Restaurant Festival tour), so we thought this anniversary was the ideal time to check it out.

Anyone who fancies treating themselves to a gastronomic night out. We'd say it's a particularly good restaurant for couples celebrating something special, with an emphasis on tables for two.

It's just off Regent Street across the road from Goodman - Oxford Street is the nearest tube.

There's no bar at Hibiscus - so if you fancy a pre-dinner drink, then best meet elsewhere beforehand. If it's a particularly fine day then we'd definitely recommend (as we did) a trip up to the top of nearby Aqua for their rooftop terrace for a pre-dinner cocktail, easily one of the best rooftop options nearby. Alternatively you could try some very good cocktails at Pollen Street Social or a quick pre-dinner wine at 28-50 which is on the same street.

The dining room here is pretty compact, but on the plus side, it fills up quickly which creates a nice buzz. Diners a deux take the tables along the edge with larger tables in the centre of the room.

The main menu is split into starters, mains and desserts - but you can pick and choose multiple items from each. Three courses are £96, six £105, eight £135.

We went for a special eight course meal which was their anniversary special - picking out some of the biggest highlights from the last 15 years. As Hibiscus's menu is very seasonal, some of those were slightly adjusted to the season - summer peas were very much in evidence. From that list, there were some very clear highlights:

Take a look at the gallery below for the full line-up.

There was a lovely selection of canapes to start with - including some cheese choux puffs - and our meal ended with some lovely nougat bites. It's also worth mentioning the excellent bread and they gain points for their wonderful salted butter (none of that unsalted nonsense here).

It's all about wines here - so don't expect a pre-dinner cocktail, it's just not that type of place. We had wines paired with every other course but if we're being honest, we've always found it hard for the sommeliers to keep up with our drinking (we're not quite sure what that says about us). The normal wine flight with the anniversary meal was an extra £95 but bottles do start at £30 so it is possible to economise on the wine side if needed.

We've been meaning to visit Hibiscus for a while and left very impressed with Claude Bosi's cooking - which wasn't overly reliant on sous vide (something fine dining restaurants seem to have way too much these days).If you fancy treating yourself to one of the best Michelin experiences in London, this should be on your list.

Hot Dinners were invited to Hibiscus, prices are correct at the time of writing.