Test Driving The Cheese Bar - cheese in every which way imaginable 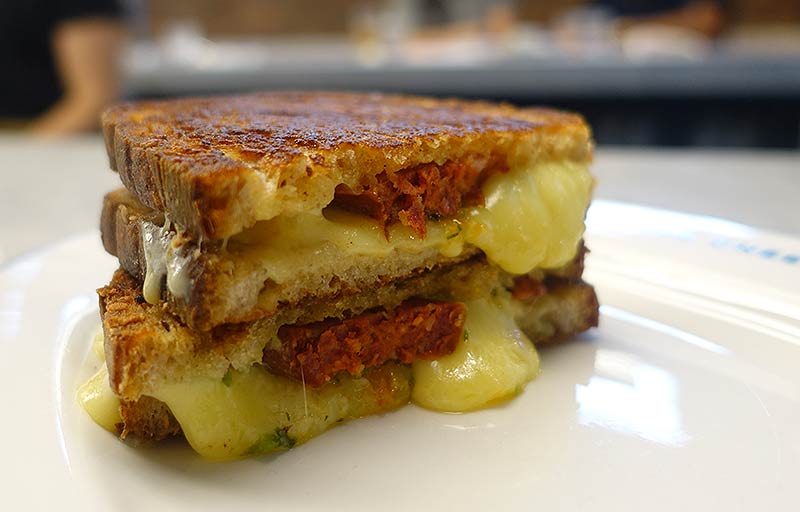 AMAZING cheese toastie - this is Queso Chihuahua, Chorizo and Jalapeno

What can you tell me about the Cheese Bar?

It's one of those places where the name really does accurately describe what they do. They essentially serve cheese in myriad forms, all served up at counter seating. It's from the same people who created the Cheese Truck, best known for serving up properly good cheese toasties in markets across London and beyond.

It's just cheese then?

Cheese is indeed ubiquitous across the menu. We think we saw one dish that didn't feature cheese in one form or another, a side salad. Although we can't say for sure that there wasn't a sprinkling of cheese over it as we didn't order it. Because of the presumed lack of cheese.

So if you don't like cheese or are in any way dairy intolerant - then look elsewhere as there really is nothing for you here. We did actually hear tell of someone coming to the Cheese Bar and proclaiming "I can't eat cheese". This is foolish behaviour. 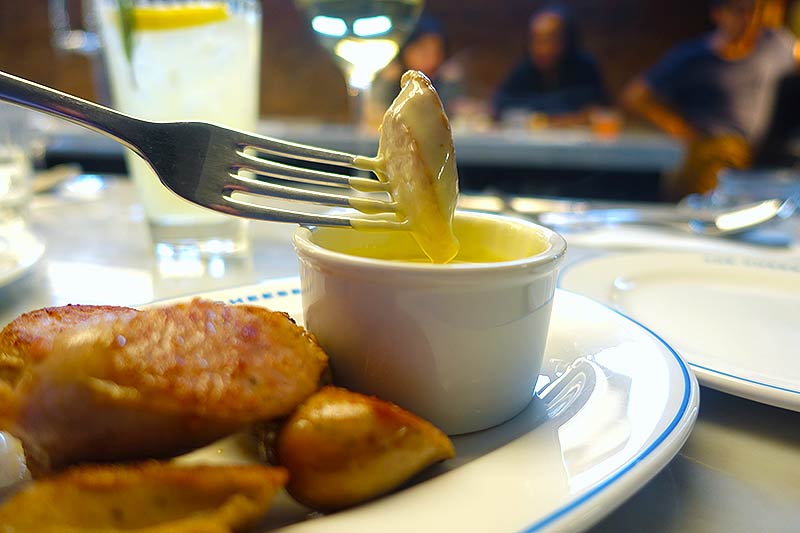 Sausages dipped in cheese. Everything you've ever wanted.

It's in Camden Stables Market - about half way between Chalk Farm and Camden Town stations.

The most obvious place nearby is out on the terrace at Proud, which is just a few steps away. If the weather's good, that's a must, and that's where we went to prepare for the cheesefest.

So it's just counter dining?

Yes - in two areas. Firstly around the main bar area where we think the best seats are - although probably best if there are only two of you. There is a longer counter table separate from the bar which is best for larger groups. 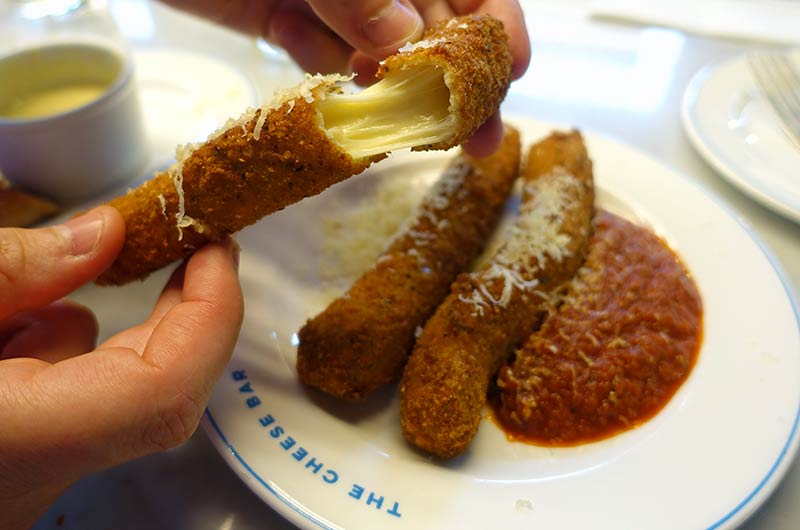 This is the hard part. We mulled for quite a bit over the menu as we just wanted to order everything. Note that this is not an option. You will reach peak cheese at some point in the evening - so the best bet is to order as you go along.

That said, here are some of the dishes we particularly enjoyed:

Another showstopper is the baked hay-smoked Tunworth - a British version of a whole baked Camembert. That comes with either  beef dripping or rosemary toasts. This takes 25 mins to arrive, so be warned if you're thinking of ordering it. And we'd suggest getting it early on as we did indeed hit peak cheese halfway through this dish.

And you'll want to leave room for one of the toasties that they're famous for. We had the Queso Chihuahua, Chorizo and Jalapeno - a little added heat for the evening (and they were generous with the chorizo too). 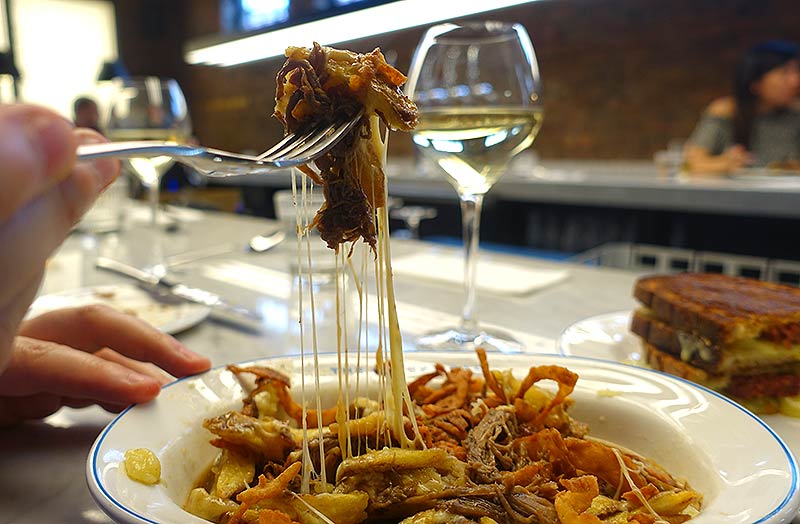 And that's if for the cheese?

Of COURSE it's not. The menu does feature your standard cheeseplate, which changes weekly, and you can also have this after the meal as a dessert (helpfully under the heading "More cheese?")

But we'd actually urge you in the direction of the Devon blue cheese ice cream with poached pear and honeycomb. Even with peak cheese having been reached, we couldn't stop eating this. Just. So. Good. 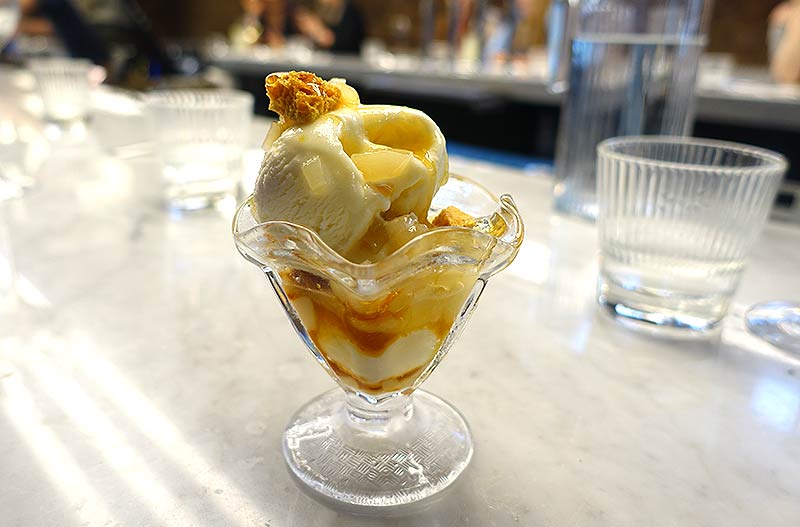 And how about some drink to wash that down?

There are three or four whites, reds and oranges on the list, starting at the £22 a bottle/ £6 a glass price point. And frankly the £22 Le Lesc, Cotes de Gasgoigne did the job for us on the night (even though we should have probably gone red). The only small criticism here is having the wine in a cooler away from where we were seating, we think just plonking it down in front of us would be easier all round.

On this occasion, my fellow diner said "this might be the best restaurant I've ever been to" which he later admitted to be hyperbole, but it does show just how immediately enjoyable the place is - and just how enticing the menu is. An all cheese menu could easily be a simple gimmick, but when it's delivered so well, you can't help but slightly fall in love with the place. We'll be going again, for sure.

Hot Dinners were invited to the Cheese Bar. Prices are correct at the time of writing.

What: The Cheese Bar