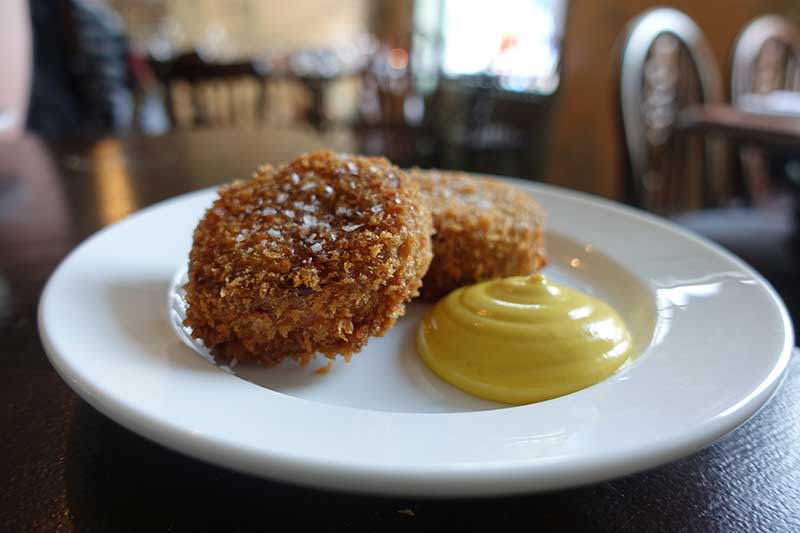 What can you tell us about Summers?

It's the restaurant from ex-St John Bread and Wine chef Ruairidh Summers (that's pronounced "Rory" if you're wondering). He's taken over the food side of things at the newly reopened Sir Colin Campbell pub in Kilburn and used the opportunity to delve into his (second generation) Irish heritage.

And it's carrying on the spirit of the pub?

Yes indeed. The Sir Colin Campbell pub itself had a bit of a brush-up earlier this year, and long had a reputation as being the kind of Kilburn pub you could sit in, nursing a Guinness and enjoying a proper Irish music session. The good news is you can still do both, but in a bit more comfort - the music's still going strong from Friday to Sunday. 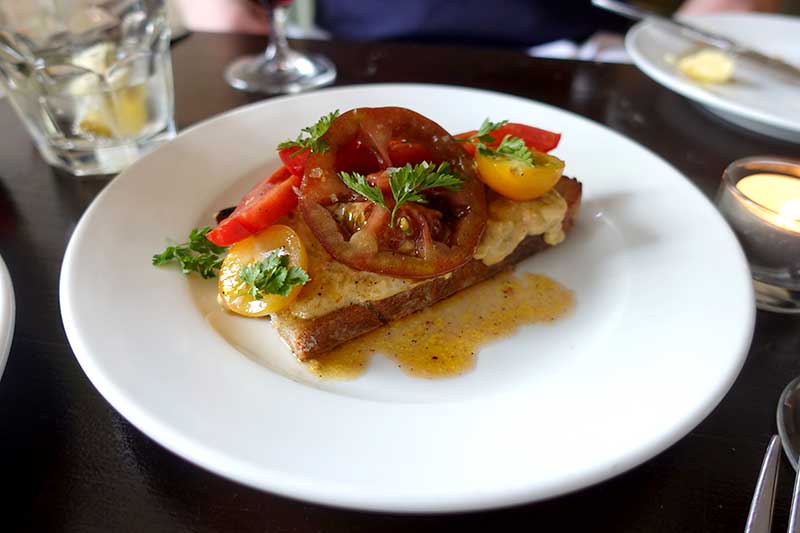 Brown crab and tomatoes on toast

And where is this?

It's on Kilburn HIgh Street - your best bet for a station nearby is Brondesbury on the Overground. Alternatively, Kilburn tube is an extra five minutes walk north. If you've ever been to the Tricycle theatre, it's right opposite that.

And where should we go for a drink first?

Downstairs in the main pub, there are a lot of craft beer choices and a short wine list (as well as several offers for flights). That said, the upstairs wine list was slightly better, with a few more higher-end wines and you can always bring a glass/bottle down with you to the main pub - a must if the music is playing.

We started our evening in the Kilburn Ironworks - which is more or less right opposite Brondesbury overground. Lots of craft beers, a decent short wine list (inc a properly pale rosé) and cocktails that included a bacon old fashioned which sadly wasn't on when we were there but is obviously worth checking out. 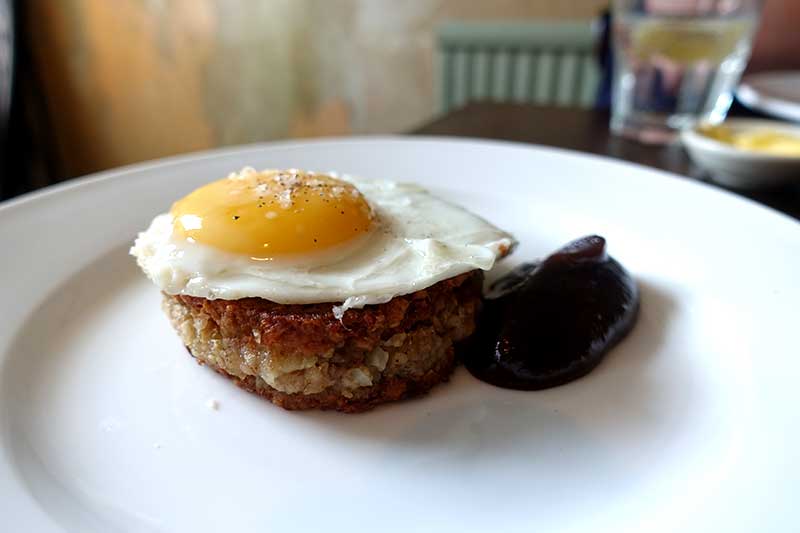 You could eat in the pub downstairs, where the same menu is available, but you really want to head to the main dining room upstairs. It's on the small side, but the tables aren't packed together and it's a lovely light-filled room.

The menu reads extremely well, so if you're half as piggy as us, bring a few friends and work your way through it. We'd say the must-have item would be the crubeens - boiled and reformed pig trotters, mixed with ham hock and deep fried in breadcrumbs. They're a proper dish of piggy goodness and you have to order them if they're on.

You'd be foolish not to order the sourdough bread - straight from the oven it was wonderful (with proper salted butter) and you'll need this to mop up sauces down the line.

As for our other favourites on the night - we particularly enjoyed:

We also ordered a bowl of champ - and yes, that's two potato dishes in one sitting. Blame our own Irish heritage. But given it's a bowl of mashed potato and scallions swimming in butter too why wouldn't you be ordering it too? 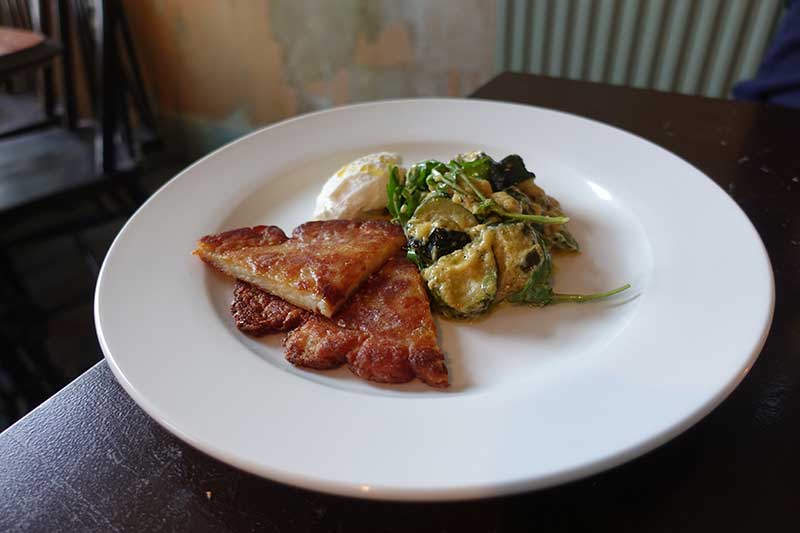 And you can also finish with a selection of Irish cheeses (inc Cashel Blue and a personal fave, Gubeen).

There's a short wine list of about five reds/whites, starting at £25 a bottle, £6 a glass (and running up to £45 a bottle). We opted for the Jaffelin Burgundy 2015 Pinot Noir at £28 a bottle, but the house Gamay Noir would also be a decent pick. 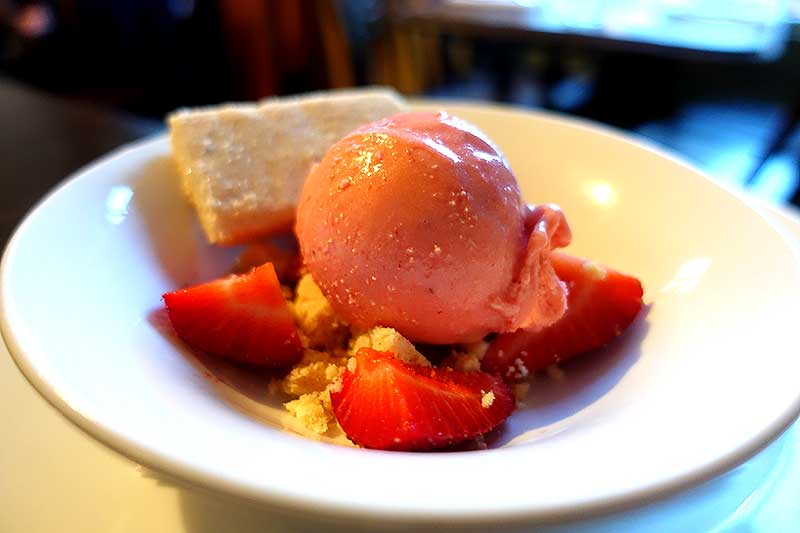 Being second-generation Irish ourselves, we strongly felt we'd like Summers, a restaurant that really feels like it's bringing something new to the London eating out scene. And we'd heard good things from all manner of connected food folk. So we may have gone in prejudiced towards it - but we absolutely adored everything that was put in front of us on the night we visited. It's a real gem and comes highly recommended. Particularly when you can pop downstairs for the Irish music afterwards.

Hot Dinners were invited to Summers. Prices are correct at the time of writing.