[SIGPLUS_EXCEPTION_SOURCE] Image source is expected to be a full URL or a path relative to the image base folder specified in the back-end but /blog/2014/spring/gallery is neither a URL nor a relative path to an existing file or folder.
0
Shares 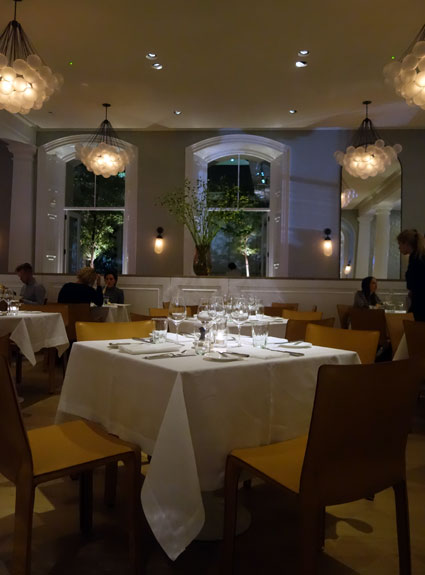 So what do we need to know about Spring?

It's the much-anticipated new restaurant from Skye Gyngell. Gyngell caused waves during her tenure at Richmond's Petersham Nurseries when her produce and seasonality-led approach earned the decidedly rustic greenhouse restaurant a Michelin star. Her many fans have been waiting patiently for her to find a new space since she left there in 2012 and now she's turned up at Somerset house.

Spring is situated in the 'new' wing - which until relatively recently was home to the Inland Revenue. A multi-million pound renovation has taken place, creating office and gallery space and the area now taken over by Spring. You can access it through the main courtyard - head right when you go in off the Strand - but the most straightforward way is through a door on Lancaster Place.

Where should we meet for drinks beforehand?

The Radio bar at ME London is close by and there's usually space at Fernandez and Welles across the courtyard at Somerset House. But there's also a new space linked to Spring called The Salon. Essentially a wide corridor, laid out with marble tables and garden chairs, they offer a short menu of ice creams and sandwiches here and - crucially - a different cocktail list to the restaurant. We had an exemplary Spring Vesper from the Salon list made with Chase, Verjuice, Bergamot Bitters and served with Tuscan olives £11 and from the restaurant cocktail list an Autumn Old Fashioned served with macerated cherries £11 hit the right spot.

The dining room is split into two distinct parts - a main room and the conservatory, a really pretty, more intimate space with potted trees and a covered glass roof. If you're after an intimate dinner a deux, that's probably where you want to go, but we loved our window alcove in the main dining room. The space here reminded us a lot of the Modern in New York - and when it fills up (we were here on an invited guests night) it's going to be incredibly buzzy.

It's a relatively short menu - between six and seven choices per course - but it reads like a dream. The good news is you're probably going to want everything on it. The bad news is that it's not cheap. You're looking at top ranking restaurant prices here - mid teens for a starter, upper twenties and low thirties for a main. But of course the question really is, is the food worth it. And the answer is a categoric "hell yes".

We kicked off with three starters. Cod's roe with creme fraiche and bruschetta £14 was an intensely flavoured roe dip. Burrata came with wafer thin slices of spec, pickled pumpkin, chestnuts and a sage oil so good we had to mop it up with extra bread £13. But the best was the ravioli of chard and ricotta with marjoram butter £12 - our favourite pasta dish in London this year.

For mains, an Autumnal dish of pork shoulder with girolles, datterini and polenta £29.50 was serious comfort food, but the star dish was a huge turbot served on the bone with bone marrow, porcini, breadcrumbs and buttered spinach £32. You don't need to order side dishes at all - portions are generous - but we wanted to try the Fern Varrow leaves with Caesar dressing and candied walnuts (£9) which was delicious but too big to share between two - maybe order it if you're a larger group.

Desserts live up to the promise of earlier courses - a warm chocolate cake with candied chestnuts and sweet cream (£8) was surprisingly light. But our favourite, by far, was the buttermilk pannacotta served with damson ice-cream and wood sorrel (£8) - the season on a plate.

The wine list at Spring has put together by Jack Lewens along with Head Sommelier Frank Embleton who was previously at The Clove Club. It's punchy but with some affordable bottles around the £25 mark. We went for a bottle of Istrian Malvazija Istarska from Kozlovic (£36) which more than held its own against the range of dishes we were trying.

It's been a while since London last had such a glamorous newcomer to the dining scene - probably not since Berners Tavern or maybe Fera. The only real downside is that Spring doesn't have its own swanky bar too (they should really turn that conservatory into one). Skye's food does justice to its surroundings and our staff were just lovely - really friendly and knowledgeable, even we came away with some tips to try new places we hadn't been to. The pricing means it's a treat place rather than a regular haunt, but we reckon it's worth it.

Hot Dinners were invited to Spring. Prices are correct at the time of writing.