[SIGPLUS_EXCEPTION_SOURCE] Image source is expected to be a full URL or a path relative to the image base folder specified in the back-end but /blog/2015/richmond/gallery is neither a URL nor a relative path to an existing file or folder.
0
Shares 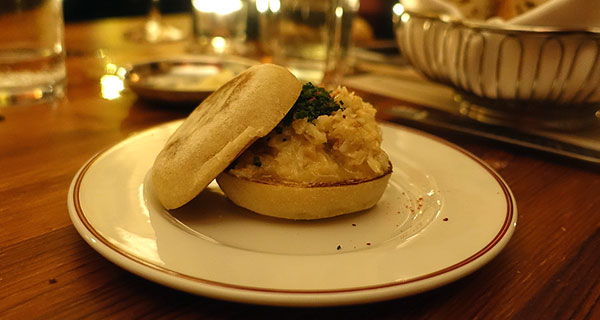 So what should we know about The Richmond?

It's a fashionable do-over of an East London pub combining the front of house talents of fashion stylist Margaret Crow with the food know-how of Brett Redman of Eliot's in Borough Market and a natural wine list by Isabelle Legeron. Gone are the Egyptian friezes and treehouse (Take a look on Google images for LMNT restaurant to get a true idea of the transformation wraught by designer Adam Bray.

About a 5 minute walk from either Dalston Junction or Haggerston overground stations.

You're not far from Rotorino for a decent glass of wine and there's also gastropub The Prince Arthur nearby. For cocktails, Dead Dolls Club is also worth a punt.

Depends on how many of you there are. Singletons and couples might enjoy being up at the bar and there's a nice space for larger groups to the left of the door as you enter. We liked that tables weren't too close together which meant that there wasn't really a duff table that we could see.

Much has been made of The Richmond's claim to be "East London's first and only raw bar". Well that's if you ignore the traditional oysters that have been pub food in these here parts for centuries. Before perusing the menu you're encouraged to go for some of the oysters, by marking on a special chit which you fancy and how many. There were six different oysters on for our visit, we particularly loved our teeny Maldo Kumamotos (£2.75). You could also order them as shooters with either vodka or tequila if you wanted to lose an afternoon or kickstart a wild evening.

The rest of the menu is a refreshingly brief affair - split into raw, starters, mains and sides. Standout dishes for us on the evening were:

Yes and chosen by natural wine champion Isabelle Legeron. We tried a few, but our standout favourite was the 2013 Plein Sud Cotes de Rhone.

The opening of The Richmond shows an increasing maturity to the eating out scene here at the intersection of Dalston, London Fields and Haggerston. The involvement of Crow has brought a fashionable crowd out in force, but Brett Redman's credentials are impeccable and his menu hits all the right notes. If we were quibbling, we'd say the portion sizes are a bit on the mean side, but the flavours are anything but.

Hot Dinners were invited to The Richmond. Prices were correct at the time of writing.