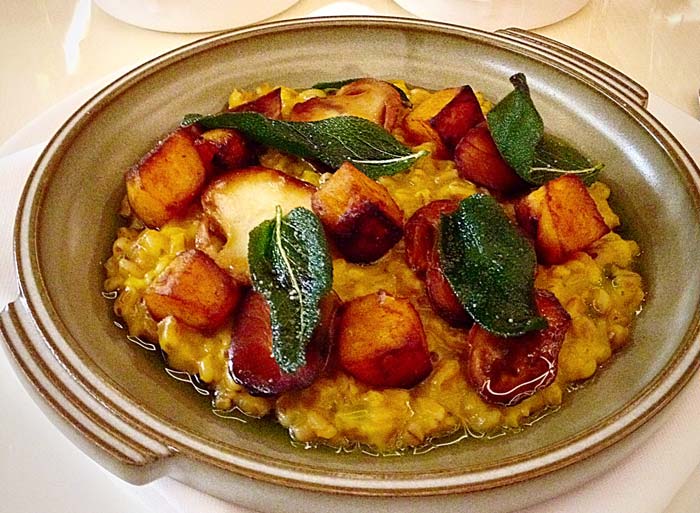 What can you tell us about Piquet?

It's the first solo venture by Allan Pickett - former head chef at D&D's Plateau - who's teamed up with Canadian born restaurateur Andre Blas to open a restaurant showcasing classical French inspired cooking, using seasonal British ingredients - including a few deliveries of fruit and veg from his mum's allotment.

There's a more informal bar and dining room upstairs available for walk-ins, but you can book a table in the cosy downstairs restaurant, which has been beautifully fitted out with dark wood panneling and vintage furniture. For Allan, who's been able to design everything from the menu to the staff uniforms, having his own place is a dream come true. "My next day off will probably be Christmas day", he told us, "but it is absolutely worth it."

92-94 Newman Street, just off Oxford Street: in a part of Fitzrovia which is rapidly becoming one of central London's top dining destinations.

You could have a pint or two at the newly classic Newman Arms in nearby Rathbone Street - also a dining destination in its own right - or for a touch more glamour there's the lobby bar at the London Edition hotel. Or you could pop into the Long Bar at the Sanderson for a cocktail - where Allan Pickett had a summer residency before opening Piquet just down the road.

We sat at a table right next to the pass - a brilliant spot which gave us all the drama of seeing right into the kitchen as the chefs were plating up. There are plenty of cosy tables down the side - and a mellow jazz soundtrack to keep things relaxed.

What were the highlights?

A main course of roasted squash barley risotto with fat slices of cep and fried sage was a study in autumn - while venison with braised cabbage and chestnuts was rich and brooding, layers of bosky, hearty flavours. Don't miss the roast parsnips on the side

As for desserts, these were naturally a triumph from a man once named as patisserie chef of the year. We couldn't resist trying a selection of all six - a gigantic Assiette Gourmande which included a beautifully rich plum and almond tart, a quenelle of chocolate and passion fruit custard with tuilles so fine they were almost transparent, and a melting disc of sable topped with Allan's mum's blackberries and - of course - custard. We also rather recklessly ordered a glorious pear and red wine tarte tatin with cinnamon ice cream, which turned out to be one of the most delicious desserts we've ever had the pleasure of eating.

There's a comprehensive list of well selected wines - from the old and new world. We enjoyed a glass of champagne brut to start and a glass of the Villa Saint - Jean Pays d'Oc to match the venison.

A lot of love and a huge amount of skill has gone into creating Piquet - and it shows. The cooking is flawless, while every detail has been carefully thought out from the quality of the produce to the quirky duck-shaped terrine dishes sourced from antique shops in France. Quite honestly, this was one of our standout meals of the year.

Hot Dinners were invited to Piquet.