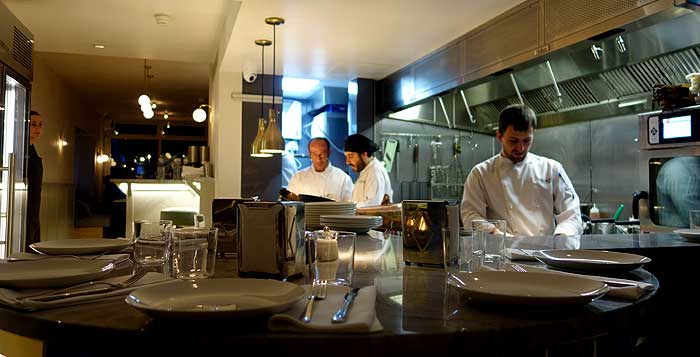 What can you tell us about Lurra?

Lurra is the next restaurant from the people behind Donostia - a Spanish restaurant launched a few years ago in the newly coined Connaught Village area of West London. That's essentially a little to the west of Marylebone. We loved Donostia when we first visited and they haven't strayed too far from their original restaurant - just across the road (you can look across it to the original).

This time they're focusing on northern Spanish Galician cuisine - most particularly its beef.

So what's different about the new restaurant?

It's much larger than Donostia, for one. And much brighter too.

When you walk further into the restaurant that you realise just how big the space is. A large bar and a handful of tables take over the front room, then there's counter dining while the back largest dining room opens out onto a courtyard (with outside seating). And there's more upstairs too, with just as much light coming in there as well. It's a lovely looking place.

Based on that - where should we sit?

Lots of options here. It's perfect for a spot of counter dining - plenty of space there - or alternatively sit where we did - along the side, looking out onto the courtyard. We think upstairs is a prime space for office parties or special events.

What else is nearby?

If you fancy popping in somewhere for a drink first, the area is getting better and better, most of which is on the same street. There's Showdown, the newly revamped bar underneath the Lockhart for strong cocktails and beer or across from that you can grab a glass of wine at Vinoteca. Alternatively, you could also pop to the bar downstairs at Bernardi's next door too. We think you could happily spend a very productive evening in this area right now.

And what to eat at Lurra itself?

There's lots to choose from here, but let's kick things off with the main occasion - the steak. It's one of the larger sharing dishes - "14 year Rubia Gallega “Galician Blond” Prime Rib, Grade 9". You'll see the huge cuts of meat in the fridge by the bar and, by all accounts, it's the most popular item on the menu. It's not cheap - but good steak never is - and given the maturity of the animal it comes from, the cuts are also pretty huge (ours on the night was 900g). But it's essential - lovely juicy Galician steak which you should have cooked on the rarer side to enjoy it properly. The beef became a huge hit on London's dining scene when it was first supplied to Kitty Fisher's and this is where it comes from.

Outside of that - other highlights of the night were:

Desserts were pretty good too - a top-drawer chocolate fondant was surprisingly light after all that meat as was the very simple mamia - a milk pudding served with orange blossom honey. Spend some time lingering on the wine to wind down after the main course and then try that too.

How about the drink?

Really, you want to put yourselves in the hands of Nemanja who, in addition to running Lurra and Donostia, has a wine import business. He sorted us out with a glass of Txakoli to start and then helped us through the interesting but complex wine list.

It is something of a gamble to open another restaurant right across from your first (wouldn't you be stealing your own clientele?) but Lurra's been an instant hit and was packed on our visit. We loved this just as much as our first visit to Donostia but, going by the size of this place, we think there's a better chance of us being found here in the near future. Recommended.

Lurra is at 9 Seymour Place, London W1H 5BA. Find out more about Lurra.

Hot Dinners were invited to Lurra, prices were correct at the time of writing.