What exactly is Jimmy’s BBQ Club?

It’s the latest innovation from the king of London pop-ups, Jimmy Garcia. Located in a leafy garden in Clapham, it’s a slight twist on the usual supper club, as each table has its own Big Green Egg barbecue, on which you cook part of your dinner.

Blimey - do you need to bring an apron and tongs?

Nope - the set-up of Jimmy’s BBQ club means you can do the fun bits of a barbecue (the eating and the prodding stuff on the grill), while they worry about the tricky bits (the menu, the prep and the washing up).

There are four courses (or rounds, as they call them), that all have an element cooked on your table’s Big Green Egg barbecue (our table companion informed us that David Beckham recently received one of these for his birthday). The first dish presented to us was a goat's curd salad. Then a member of staff came around with a tray of peach halves, which they placed on the barbeque for us, telling us to set the timer for four minutes, and to add them to our plates of salad when we deemed them ready.

Jimmy’s background in catering and pop-up events means that the whole evening feels like a lavish garden party that’s been thrown in your honour. Our evening started with delicious canapés and prosecco on the garden patio. Scallops, chorizo and samphire were served in shells, and garnished with wild garlic flowers from the garden. We couldn’t help grabbing several of the charcoal cones filled with pea and mint puree as they floated past. Crunchy, light and very fun - like a Mr Whippy with the colours inverted, and a spear of asparagus for a flake. 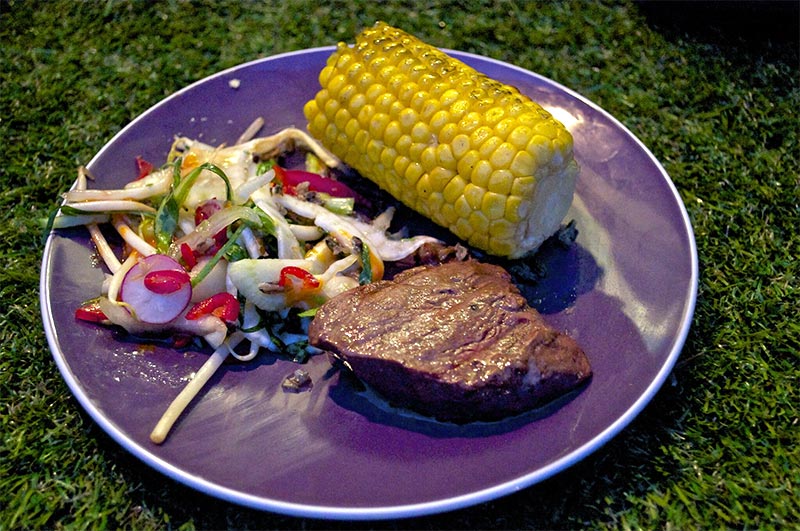 MEATS, MARINADES AND GRILL FOR THE THRILL - Beef tail fillets marinated in cola and soy, served with raw kimchi salad and wild rice and the corn on the cob

Tell us more about the menu

The format is fairly traditional - salad, fish, meat and sweet, but each dish is inventive and a total delight. Here’s a run-down of what you get:

ROUND 3 – “MEATS, MARINADES AND GRILL FOR THE THRILL”

Throughout the meat course the staff were on hand to advise and monitor the progress of your grilling, so you don’t have to worry about underdone chicken. 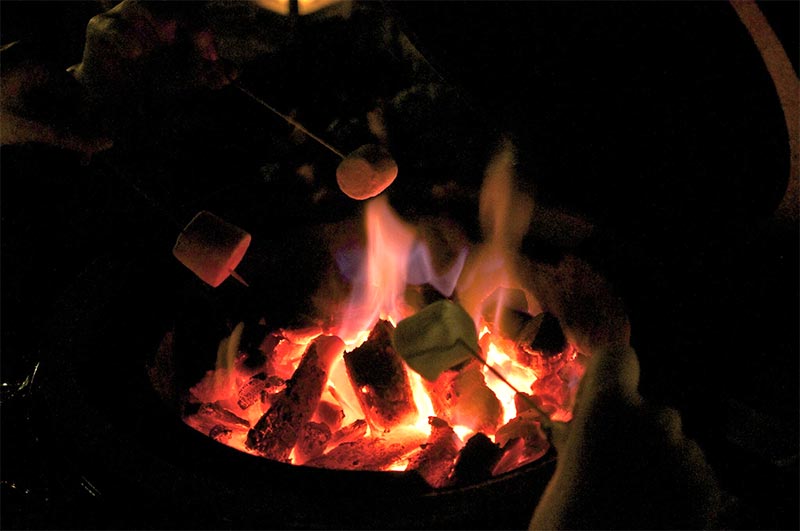 Finishing up with S'mores

The BBQ club is an al fresco affair that runs literally rain or shine - so be prepared for whatever the British summer may throw at you. The tables are picnic style benches ensconced under a fairy light strewn gazebo. The smallest table seats six, while the larger ones can take around 10. One of the larger tables it separate from the rest, on a lawn - so if there’s a large group of you, try and reserve that one.

There is an honesty bar with beer and two choices of wine, as Jimmy put it, you can either choose ‘good, or very good wine.” There’s also the option to BYOB, so the evening can be as boozy or decorous as you like.

What else should you know?

As it’s held in a back garden on a residential street, it’s a little tricky to find unless you know what you’re looking for. Keep your eyes peeled for a chalkboard pointing towards an alley. Due to the location, there’s not really anywhere nearby to meet for a drink first. We recommend travelling to the venue with your dining pals - and then availing yourself of the fabulous canapés and fizz.

At £38 a head, Jimmy’s BBQ Club is a good choice for when you fancy a unique dining experience, that isn’t going to completely break the bank.

Jimmy's BBQ Club is running until the end of August at 409 Clapham Road London SW9 9BT. For info on how to book, visit their site.

Hot Dinners were invited to Jimmy's BBQ Club. Prices were correct at the time of writing.