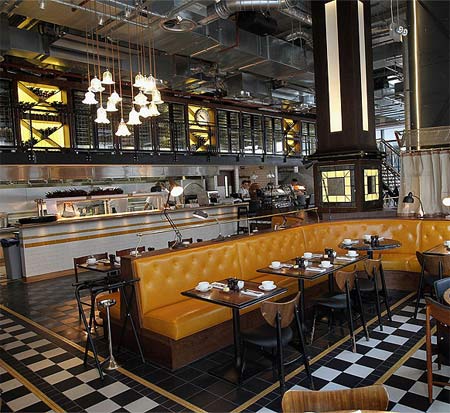 What can you tell us about Bread Street Kitchen?

It's the first new opening from Gordon Ramsay since he relaunched Petrus and sees the TV chef opening in the One New Change shopping complex just across the road from St Paul's.  The restaurant has been a long time in the offing, so expectations are high. The entrance to BSK is right opposite Jamie Oliver's Barbecoa, so expect a certain amount of rivalry between the two.

Who's the restaurant suitable for?

A wide mix. Situated in St Paul's it's obviously going to attract a city crowd. That said, Ramsay still has huge appeal so expect many to travel here, not to mention the tourist trade from across the Pond. Expect it to be boisterous during the evenings, particularly on Thursdays and Fridays but during the day at the weekend, it's also ideal for families.

Where should we meet?

There are a number of drinking holes available at One New Change.  If you fancy a glass of pre-dinner fizz, pop along to the Searcy Champagne  Bar. If you're looking for a view, head up to Madison on the top floor and if you're after a pre (or post) prandial coffee, pop along to Beas of Bloomsbury.

The lazy option, but none the worse for that is try the downstairs bar at Bread Street Kitchen. Designer Russell Sage has done a brilliant job (we particularly liked the old school vaulting horse for seats) and there's a separate bar snack menu here too.

Bread Street Kitchen is huge, possibly the largest of Ramsay's UK operations (given that Maze is split in two). As you enter the main restaurant entrance from the second floor, there are a number of stools and an area which is reserved for walk-ins. This area also houses the raw bar. Once the restaurant beds in a bit, you can reserve a counter seat up at the raw bar to watch your food being prepared in front of you.

Our favourite part of the restaurant was the section by the hot kitchen and woodburning oven - it's where you can see the chefs bustling away and gaze at the impressive wine terrace above. Plus we preferred the arrangement of seating in this area.

By now you should realise that this is one of the most important questions for us at Hot Dinners.  Ramsay Holdings had previously impressed us with the bread at Maze and happily continued to do so at Bread Street. As it should, given the name. The selection was great and the golden, salty butter was just what we wanted.

The menu is split into three distinct sections - the raw bar, traditional mains from the Hot Kitchen (with a strong basis on fish) and food from the wood stone oven.  We went for a selection of dishes across all of these.

Stand-outs were the starter of saltwater prawns and crab toast from the raw bar, a beautifully presented dish with prawns which tasted like they'd been plucked mere moments ago from the sea. It augured well for the rest of our meal. Mains also impressed - steamed bass with savoy cabbage, castellucio lentils and roasted pumpkin was raised out of the ranks with the addition of a fabulous smoked aubergine puree seasoned with cumin and coriander; it was a perfect companion to the brill.  We were also impressed by the suckling pig with spiced apple sauce from the oven - a perfectly prepared piece of pig covered with teeth-threatening crackling.

If all that wasn't enough to be going on with, in the means of research we felt we had to try Bread Street's short rib burger to see how it compares with London's growing competency at meat patties. Ramsay's version can certainly hold its own with the very best in town. Perfectly cooked to a lovely pink and well seasoned - if a touch ungainly to eat - it came on a brioche bun with a touch of salad on the bottom. One of these at £11.50 and a glass of wine or beer would make for a pretty perfect lunchtime pitstop in these here parts.

We rounded things off with an impeccable chocolate tart served up with salted caramel ice cream and some ricotta fritters which came with a teensy pot of hot dipping custard. All was well with the world.

Looking at the "by the glass" section, you can get glass of Chapel Down sparkling for £7.50 and the cheapest wine is £4.50 a glass. Prices go up as far as £18 a glass for Chassagne-Montrachet.

We think Bread Street Kitchen deserves to be a huge success. The food was really very good indeed, the staff seem to have recovered from the early reports of service problems, and it's definitely worth crossing town for. Designer Russell Sage (Zetter Townhouse) has created a lovely looking space here - part industrial chic, part bustling city brasserie. There's no getting away from the fact you can rack up a hefty bill here without blinking - our only mildly boozy lunch would have set us back an eye-watering £180 for two (although we did have that extra burger). But we think the market here will stand it.

Hot Dinners were invited to eat at Bread Street Kitchen.  Prices are correct at time of writing.