[SIGPLUS_EXCEPTION_SOURCE] Image source is expected to be a full URL or a path relative to the image base folder specified in the back-end but /blog/2013/gails/gallery is neither a URL nor a relative path to an existing file or folder.
0
Shares 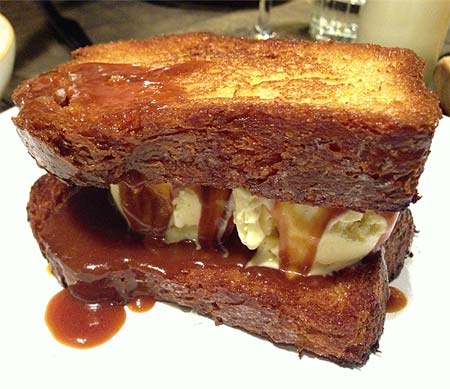 What can you tell us about Gail's Kitchen?

The people behind popular London artisan bakery Gail's have come up with their first restaurant. Owner Tom Molnar describes it as a place to experiment and he's picked a brilliant chef to do just that. James Adams comes here via The River Cafe and has been given full rein to test new dishes - the menu changes pretty much daily.

It's actually the hotel restaurant of the myhotel in Bloomsbury. There's a Gail's here too, but the restaurant is a separate room.

If you're a solo diner, then up at the bar's a popular spot, particularly early in the evening, and you'll see many of the dishes prepared in front of you. There are a few larger tables, making this a good place to go if you're eating with a larger group. Or just sit by the window and watch the world go by.

You're not far from Charlotte or Goodge St - so there's the Draft House or Charlotte Street hotels both pretty close by. There's also The Jack Horner on the corner of Tottenham Court Road and Bayley Street, which we haven't been into but is a handy meeting spot.

Gail's Kitchen had only been open for a few months when we visited, but certain dishes have already achieved icon status - not least desserts (of which more later). Dishes are small sharing in the main - they recommend around 4-6 for two. We started with wafer thin lardo (cured in house) at £2 each which was soft and melting on their sourdough bread. Then we had their take on tortilla chips and dip - warm polenta chips  with warm gorgonzola dolce poured all over (£3.50). Now that's the kind of thing we'd like to eat (but never will) at the cinema.

There was a crunchy mackerel slider at £4 (which was big enough to share as a snack). We also had chargrilled salmon which came with blackened radicchio (£9.50) and really enjoyed shreds of tender beef brisket with coleslaw and montgomery cheddar on dark sourdough (£10.50).

From the word go, we'd been told to leave room for dessert and it soon became apparent why. We started with a plate of freshly cooked chewy warm choc chip cookies (£6) served with the mini pints of milk you might remember from school - if you're as old as we are - and a seriously boozy rum baba £6). Then came the dish that'll probably be the deciding factor in people choosing to come here - the ice-cream sandwich (£7.50). That's vanilla ice-cream sandwiched by toasted brioche, covered in butterscotch sauce and cinnamon sugar - the kind of dish that'll negate around a month of you doing the 5:2 diet but make you very glad you came. It's definitely one to share rather than hog (and we use that word in the proper context here) to yourself.

We kicked off with a retro French Martini and the small wine list starts at a reasonable £18 a bottle (£5 a glass).

This meal was a breath of fresh air from start to finish. Almost every dish we tried was inventive and delicious and ordering numerous small portions meant we could try a load more things. Adams is doing some really interesting work here - we highly recommend a visit soon.

Prices were correct at time of writing. Hot Dinners were invited to eat at Gail's Kitchen.