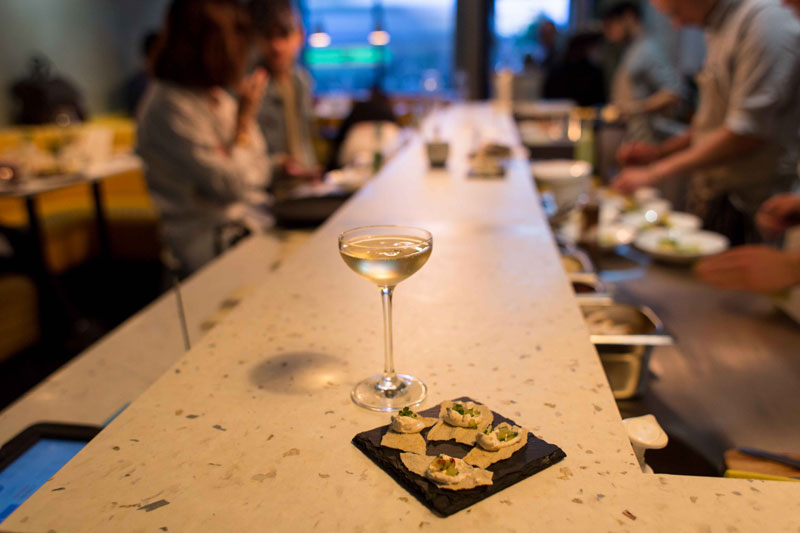 Yes we WILL kick off with some Krug, thanks.

What can you tell me about Cub?

It’s the first restaurant from talented bartender and industry maven Ryan Chetiyawardana (aka Mr Lyan). Ryan has teamed up with Doug McMaster of Brighton’s zero-waste restaurant Silo to open a drinks-led dining experience which opened its doors in the former White Lyan site last month.

On Hoxton Street, which has managed to avoid the full impact of the wave of gentrification which has swept over Shoreditch. It retains a unique East End charm which means to say that Hoxton still straddles the right side of trendy and local. There are some great restaurants, pubs and bars which line the street which means there’s always a constant hum of activity throughout the week.

Absolutely. Whilst Cub inhabits what was once White Lyan bar, the downstairs area has been given a new lease of life as Super Lyan. The latest iteration of Ryan’s pioneering cocktail bar serves a collection of ‘B*tchin’ Classics’, familiar drinks which have been given a Mr Lyan creative touch. It’s the perfect place to settle down for a pre-prandial before heading upstairs.

Current favourites include Man on Fire – Whisky & Mezcal with lemon pine honey and their Bloodshot Negroni – Bourbon, Campari, beef tea, vermouth and mandarin spritz. All drinks are between £9-10 (and all very potent!). 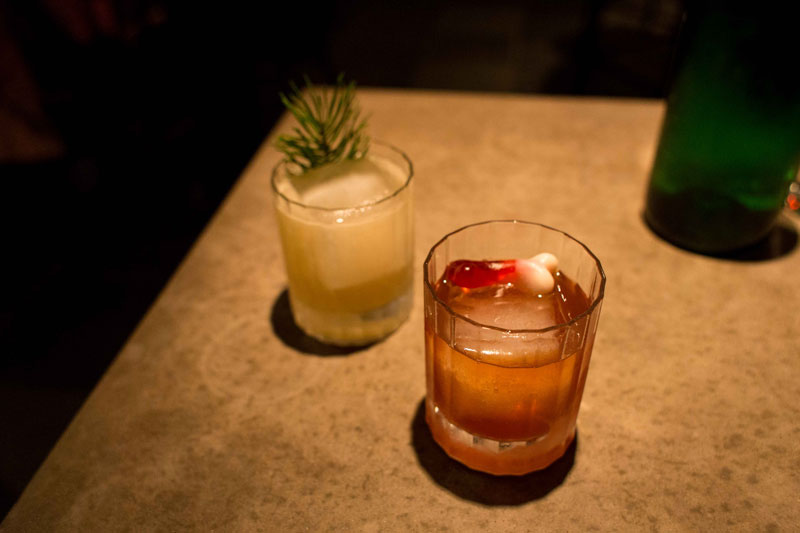 The 35-cover venue is bathed in warm colours and features some rather comfortable looking mustard yellow booths which run the length of the room. These provide diners with a view of the bar, although there’s really not a bad seat in the house.

One of the first things you'll notice is that Cub has neither a kitchen or a bar but a clever combination of the two. This lack of division is important because their approach is to approach food and drink as a seamless offering – the shallow bar acts as one long pass, where a bartender and chef prepare the food and drinks side by side. This results in some creative and complimentary combinations as both consider clever ways to use the same ingredients in the glass as well as on the plate. 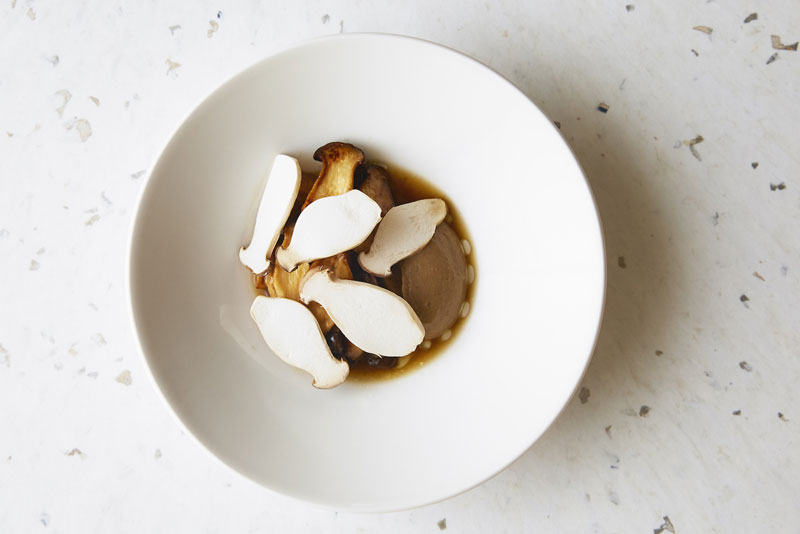 What’s on the menu and what should we drink?

At Cub there are two paths to follow. The first is a £45 tasting menu inclusive of four courses and four drinks – something we’d strongly recommend. However, Ryan and Doug are keen for Cub to also be a place where you can stop by for some drinks and a few delicious plates. A short a la carte menu featuring some of the dishes from the tasting menu is also available.

If you go for for the tasting menu, you’ll first be rewarded with a gift - a golden coupette of Krug. This unexpectedly luxurious offering sets the tone for the meal.

The menu at Cub changes weekly with new ingredients and methods being brought in house and developed. Following our sparkling opener we were presented with a deceptively simple plate of green tomato, fig leaf and white peach, a textured and umami-driven opener, also completely vegetarian – definitely a key theme here.

The drinks which accompany each of the courses bounce right off the dishes. Our first was a light but sharp combination of greengage plums, cider brandy.  The double acts of dish and drink continued with an array of creatively-paired ingredients, with a few surprises along the way.

Our favourite dish combination of the evening was ‘Shrooms on Shrooms’ a duxelle of girolle mushrooms with a roasted and fresh oyster mushroom on top. This was paired with their (rather bizarre-sounding) Gin, Banana-fermented carrot, bitter orange and miso cocktail – served aperitif-style.

Finally, it’s also worth mentioning that the coordination from the kitchen and bar is already very refined. Timing on tasting menus can be a tricky thing to execute, however the tick, tock of drink followed by dish ensured a smooth rhythm throughout the meal. We left feeling rather satisfied and not hurried at all. 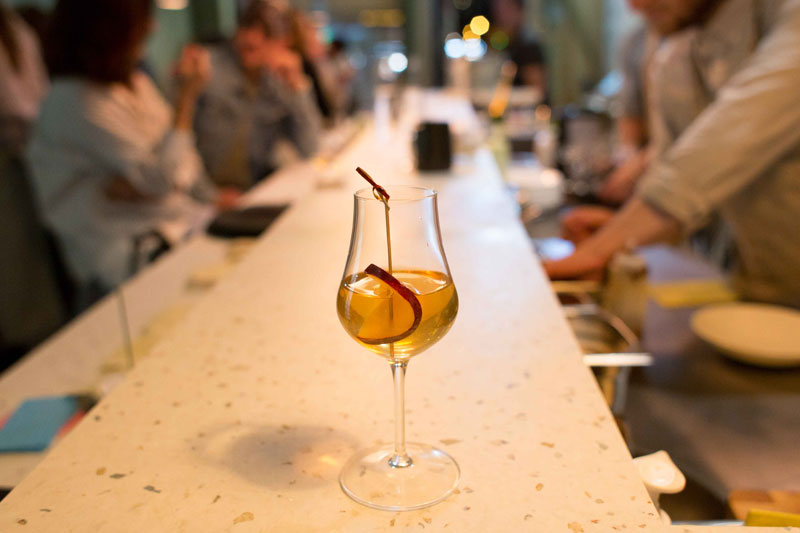 With the rest of the dishes on the menu not playing by the rules, our dessert course was another of the highlights. You can rely on Mr Lyan to forego the traditional routes, but their version of the coffee cocktail, which features Square Mile Coffee, Cognac and Peach felt like the right way to end a meal like this.

We’ve mentioned the cocktails above, but if you’re really dead set on wine then the team maintain a (very) short list of wines by the glass and bottle for £7 / £40. These change regularly but when we visited there were a couple of lovely natural Spanish wines available. Also, it’s worth mentioning that if you’re in the mood to drink Krug, this is one of the cheapest places in town to drink it, a glass will set you back £32 and a bottle £180.

With this ambitious new opening, Ryan and Doug have sought to tinker with the rules of a conventional restaurant experience and the result is a delightful success. Whilst the format for this kind of experience is, as we've said, deceptively simple. we think that £45 for dishes and drinks of this quality is quite the steal.

It’s not for everyone, but in this context that's more of a badge of honour. For those feeling perhaps a little uninspired lately by restaurant openings, Cub is a real breath of fresh air.

Hot Dinners were invited to Cub. Prices are correct at the time of writing.