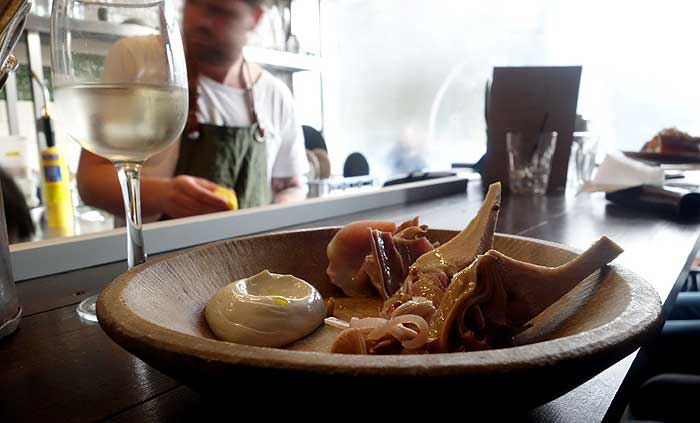 What can you tell us about Counter Culture?

It's the latest from Dairy's Robin Gill and is set up right next door to the Dairy itself. It takes the place of the much lamented Deli - but at the same time has immediately benefited from much of the work that the deli did before it, the Dairy's pickling methods being a good example. But now it's been converted into the south London equivalent of a pintxos bar - but serving very different food.

How big is the place?

Not very. It seats around 15 on stools and maybe a little bit more space for standing too.  So yes, it's cosy but gives a great opportunity to interact with the chef (something we love about counter dining).

So what kind of food can we expect?

There are very little in the way of cooking implements on the scene, excepting a large blowtorch, so all the focus is much more on the assembling as far as Counter Culture goes. So you can expect the menu to change very regularly with an ever changing range of snacks and slightly larger plates.

Of the dishes we tried on our visit, the top recommendations were:

All the dishes represented just how the Dairy can push the boundaries, and it makes Counter Culture VERY different from everything before it.

And what can we drink?

At the time of writing, Counter Culture is BYO, so you can drink anything you want, but with a £4 cover charge. There IS an Oddbins relatively close by, but our recommendation would be to wander down closer to Clapham North station to CellarSW4. a relatively new wine bar that sells some great bottles too. We took away an English bacchus from Albourne Estate in Suffolk that was one of the nicest English (non sparkling) whites we've ever had. We popped in there for more later and can definitely recommend the place.

In Counter Culture itself, there are a couple of non-alcoholic cocktails too. And you can "freshen those up" yourselves if you have any cheeky booze miniatures that you remember to bring with you.

Anything the people behind the Dairy do is always worth checking out and this is no exception. An ever-evolving menu and some great dishes means Clapham locals are VERY lucky to have it.