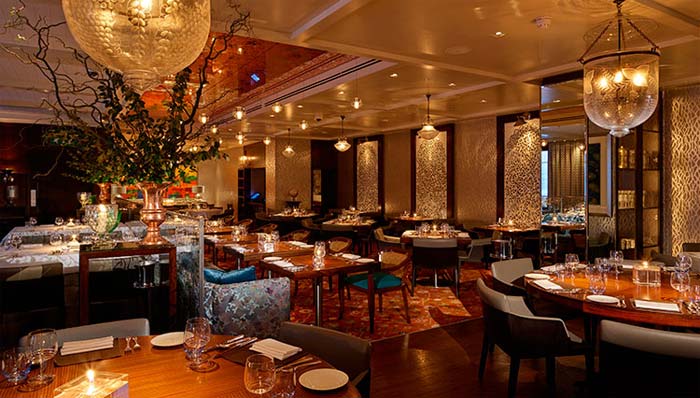 What should we know about Chutney Mary?

It was originally based in Chelsea for 25 years until the whole enterprise moved to a much swankier location right in the middle of Mayfair. It's essentially a high-end Indian restaurant, set in a pretty incredible looking dining room and with a few interesting twists on traditional Indian fare.

Where is the new location?

It's in a prime position on St James's Street, a few doors down from Sake No Hana and Cafe Murano. The closest tubes are either Green Park or Piccadilly Circus.

Its closeness to Westminster also clearly means that it's a prime location for some of the political movers and shakers. We spotted John Reid as well as David Cameron and George Osborne having a cosy Friday night meal when we popped in (so it seems to be a good spot for a business meeting). Apparently Cameron organised a takeaway from Chutney Mary on election night too - so he's definitely a fan.

Other than that, we think it's good for anything from a posh date night or good for a family night out on one of the bigger tables.

Lots to choose from in the area, but possibly the top choice nearby would be Duke's Bar at the Duke's Hotel for one of the best martinis in London. Alternatively, Chutney Mary has such a huge bar itself that it could well fit in this category for any of the nearby restaurants too. It's certainly a bar we'll be using more of in the area.

We quite liked the look of the tables for two by the wall of the restaurant and then there's always the private-ish booth at the front of the restaurant where the PM sat. Basically it's private enough for a chat while public enough so that everyone knows your in there...

As mentioned, it's high end indian food, with the main courses perhaps moving closer to more known dishes from the Indian grill and slow cooked section of the menu. However, for us it was the starter section which really stood out with some truly outstanding dishes. Definitely recommended are:

But everything we had was very good indeed. However, we do have to point out the cost at this point. It's not a place where you go for a cheap meal - our butter chicken was really very good, but did come in at £19.50. So just bear that in mind when allocating the budget.

A special mention too for the dessert of darjeeling tea creme brulee (£8). We haven't had the best success with desserts at Indian restaurants but this was one of the best creme brulees we've had in ages (and we'e had a LOT of them).

For a relatively new addition to Mayfair, Chutney Mary looked on a Friday night like it had been a part of the scene for ages. It was thoroughly buzzing, with a great mix of a crowd and had pretty important VIP in the room too. It looks like they've made the move from Chelsea with ease and could be in their new digs for another 25 years yet.

Hot Dinners were invited to Chutney Mary. Prices were correct at the time of writing.