[SIGPLUS_EXCEPTION_SOURCE] Image source is expected to be a full URL or a path relative to the image base folder specified in the back-end but /blog/2012/caravan/gallery is neither a URL nor a relative path to an existing file or folder.
0
Shares 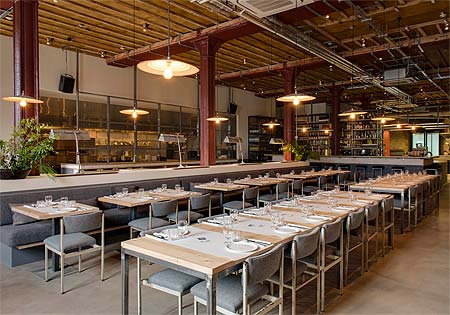 What can you tell me about Caravan?

The King's Cross Caravan is the second outing for the restaurant and coffee roastery after its popular incarnation in Exmouth Market. It's part bar, part restaurant and part cafe. As it has its own (huge) coffee roaster on site, there's a lot of attention paid to its coffee.

It's behind King's Cross station and is part of the completely restored Granary Building which also houses St Martin's College. It's about five minutes from the station - past Eat Street and the King's Cross Filling Station beside a quite spectacular new fountain.

As it's just next door to St Martin's College, we'd expect a few students knocking back coffees during the day - but when we went in the evening it was a very mixed crowd. It's a laid back affair and when busy (as it was on the day that Marina O'Loughlin had given it a rave review in Metro) there's a great buzz to the room, without it being too noisy. We think it'll get all sorts of punters, from hungry commuters and local businesses to people willing to travel to the area for the food.

There are a few tables aimed at drinkers only, so Caravan itself is ideal for meeting up. And just across the road is the King's Cross Filling Station, also home to Shrimpy's and ideal for an outside drink if the weather's holding up.

The room is spacious enough that we think you could sit pretty much anywhere and be happy (we were particularly impressed by the surprisingly comfy felt seats). If we had to choose, we'd pick the seats by the wall - looking out into the restaurant if you can.

It isn't, but there's a big focus on bread on the menu so there's still plenty to choose from. From this section, we went for the ham hock terrine, smashed peas and soda bread. We've since heard recommendations of the jalepeno corn bread with chipotle butter, so we'd head back for that too.

The menu is split into bread, cheese & meats section, small plates, pizza and large plates. We've heard good things about their pizzas, but wanted to try some more dishes from the small plates menu to see what the kitchen could offer in this area. Of these, standouts were the buratta with puy lentils and candied red pepper and the grits with girolles, pecorino and truffle oil - one of the best grits dishes we've ever had. The chorizo with butternut squash croquettes were fab too, comparing very well with croquettes one of us had eaten in Spain only the previous week. In retrospect, we'd probably go back and have a lot more from the small plates list - but that only gives us a good reason to return.

As with any restaurant serving small plates, we'd recommend discussing with the waiter as to when you want everything to arrive. On this occasion, we forgot that important lesson and our mains arrived while we were half way through the small plates. Not a massive problem - but it did mean we had to abandon our scallop ceviche in order to eat the mains while they were still hot.

As for those mains (or "large plates") there's a shortish list to choose from so we went for the half baby chicken with salsa verde, hazlenut stuffing and broccoli. It was a fine dish (the salsa and hazlenuts being a perfect foil for the chicken) but the real star was the lamb leg chop with kale, ratte potato and anchovy butter. This was referred to as the "best lamb chop I think I've ever eaten", so high praise indeed.

At this point, we were struggling, but still carried bravely onto the desserts - which turned out to be a wise choice. The gingerbread treacle tart was a fine end to the meal and blessedly not overly sweet. But we really loved the butterscotch caramel pot served in a little teacup with salted shortbread.

Caravan's Exmouth Market branch already has a very good reputation for its weekend brunches and apparently they're already serving hundreds at the weekend - so that's going to be end up being another big draw for this restaurant, not that it needs it.

There are a few specials worth trying. First up is the Glero prosecco on tap - at only £4.50 a glass it could prove a very dangerous attraction although we'd like it to be a teeny bit fizzier. Another drink we'd recommend is "The Good Oil" Caravan Pale Ale. Created in conjunction with the Camden Brewery, this is infused with Caravan's own coffee. So there's a bizarre sensation of drinking beer with a distinct coffee aroma - and with works surprisingly well. But if that's not your thing, there are plenty of bottled beers or Hells Lager from the Camden Brewery on tap.

The cocktail list also has a few references to Caravan's coffee leanings and drinks are priced between £6.50 and £7.50 - they're innovative, but all that crushed ice means they can be a bit watery. The wine list, in the meantime, starts around the £17 mark and gets up to £48 with a large range of options in between. We opted for a refreshing Verdejo at £28.

Living in North London ourselves, we've waited many a year for King's Cross to be worth travelling to for food reasons and finally its time has come. Caravan is a great, buzzy restaurant with food worth returning for and a drinks menu well worth working your way through (and that's before we get to the coffee). It will be a huge hit and it's also a great place to visit as the huge square outside looks wonderful on a good day, with plenty of outside seating planned and a new Bruno Loubet restaurant will soon be opening next door. We'll be going back and we think you should go too.

Hot Dinners were invited to eat at Caravan. Prices were correct at time of writing.