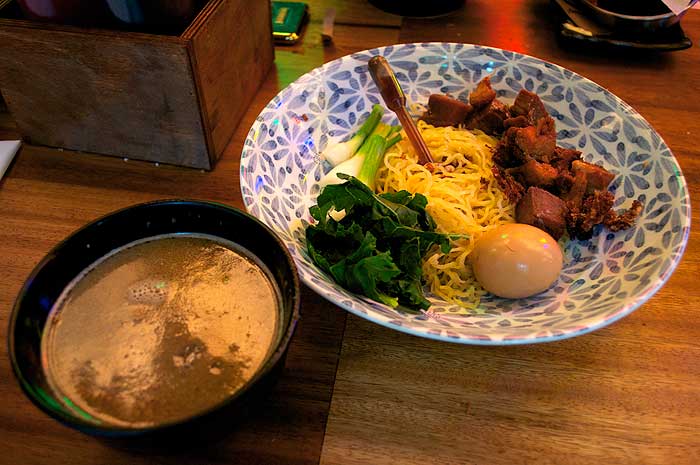 I’ve managed never to have heard of Bone Daddies, what do I need to know?

Ever since they opened their first ramen bar in 2012, Bone Daddies have been delighting Londoners with their fresh take on Japanese cuisine. They’re dedicated to creating the perfect ramen - made with traditional bone broth and served with a rock ‘n’ roll attitude. They have branches in central, west and south London, and now they’re extending their empire by opening their first east london branch. The new Bone Daddies is part of The Bower, a trendy new complex of shops and restaurants just next to Old Street tube station.

Where can we get a drink beforehand?

The Draft House is another brand that, like Bone Daddies, has slowly been making a name for itself across London. They prioritise good beer and genuine friendly vibes over pretentiousness (always welcome in east London). Meet at The Bower's branch for a quick pint before going a couple of doors down to Bone Daddies. It’s also a good spot to while away time if you’re not lucky enough to grab a table, and are waiting for the queue to go down.

Our first impression was that it was jam-packed and bustling, in the best possible way. We went on opening night, and although every table was full, it felt lively and fun, rather than hectic and cramped. The ceiling is crammed full of paper lanterns, and the walls glow with fluorescent neon lights, making it feel cosy and intimate, even though we were sharing a long table with several other diners.

All the tables in Bone Daddies are communal, so if you truly can’t bear the thought of sharing space with strangers this may not be the place for you. However, you’ll be missing out on a treat. 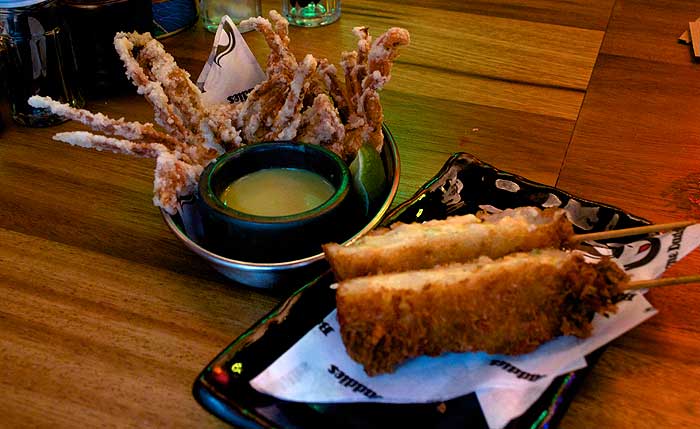 So let’s talk about the food

Ramen is the star attraction at Bone Daddies, but it would be criminal to neglect the the starters and sides. The people next to us ordered the wild softshell crab (£9.40), and as soon as we saw the waitress set it down, we knew we had to have it too. It arrives looking like a beautiful blossoming flower, and is served with a zingy green chilli and ginger sauce. It’s sweet, delicious and a complete delight.

The range of kushikatsu (deep fried skewers of meat and vegetables) is definitely worth exploring too. We went for iberico and roast onion (£4) and cheesy japanese potato salad (£4), which came with a caddy of sauces to drench them with: Kewpie mayo, chilli, soy and something that our waitress called ‘brown’, which transpired to be an incredible sticky ginger and soy concoction, kind of like a Japanese HP sauce. We’d never tried kushikatsu before, and while it was a little strange eating potato salad on a stick - definitely something we’d revisit.

The ramen choice range from traditional to the avant garde, here’s what we went for 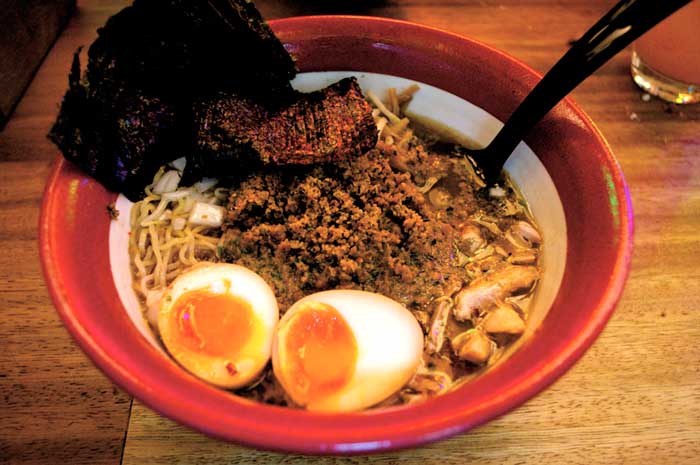 Anchovy dipping ramen (£13) - fried pork, black pepper vinegar, anchovy and spring onion in a 20 hour pork bone broth. This is a dish that makes you sit up and pay attention from the first mouthful - it’s absolutely outstanding. I had to ask the waitress how to eat it, as it doesn’t look like your usual ramen. The broth is separate from the rest of the ramen components, and there’s a pipette of black pepper vinegar is tucked into the noodles. The idea is to dip pieces of fried pork into the anchovy broth, and slosh it onto your noodles to your liking. The saltiness of the anchovy combined with the fatty pork was absolutely heavenly, and the flavours were held together nicely by the creamy broth. A wonderfully lavish dish that merits a visit to Bone Daddies just by itself.

We couldn’t resist rounding off the meal with a mochi ice cream each. Ramen is filling, so these sweet little mouthfuls are the perfect palate cleanser. As they’re only £1.50 each, you could cheerfully order all nine flavours to share, but we decided exercise restraint, and just to go for raspberry and coconut.

Alongside Asahai beer, which is always going to be brilliant accompaniment to Japanese food, Bone Daddies offers a very exciting range of cocktails. We tried the frozen yuzu margarita, which was wonderfully tart, perfect for cutting through the richness of the bone broth in the ramen.

If you’re in the mood for wine, the choices are limited but respectable, with three options for red and white, and only one for rose and prosecco. A glass will set you back around £5, and a bottle is around £20. Sake is really where the action is. It’s available warm or cold - the carafes range from £19 to £53, but if you fancy splashing out, try one of their specialty blends for £61.

Bone Daddies don’t mess around when it comes to food. Everything from the decor to the menu is bold, exciting and sexy. On the table next to the soy sauce and garlic, there are complimentary hair bobbles and plastic bibs - clearly Bone Daddies want you to get stuck into their food, get messy and have a good time. And luckily it’s extremely easy to do all three.

Hot Dinners was invited to Bone Daddies. Prices were correct at the time of writing.