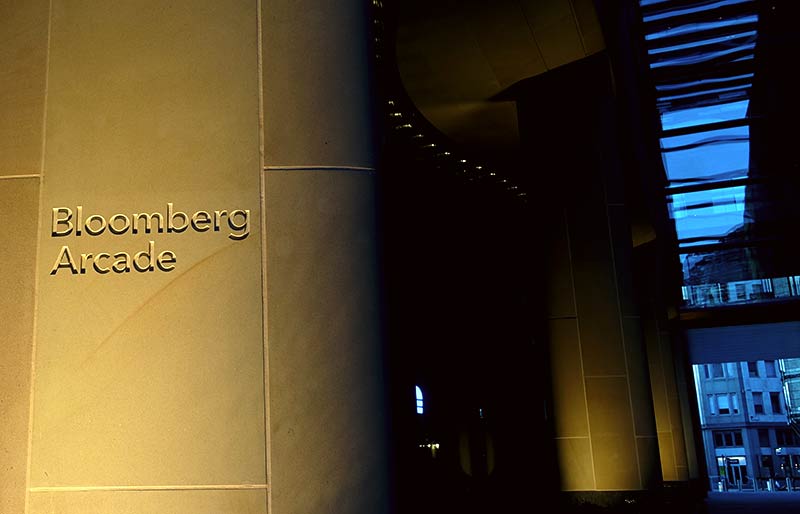 So what can you tell us about Bloomberg Arcade?

It's all part of the HUGE new Norman Foster-designed Bloomberg European headquarters in the City. Officially opening today, the well-minted owner Mike Bloomberg has gone all-out with a huge new building right in the heart of the City. Such an impressive edifice needs some good restaurants to go with it and that's where Bloomberg Arcade comes in.

We've just been given a quick tour around the restaurants that have opened so far - and have news on what's to come too.

How did the restaurants come about?

As with a lot of new properties popping up across London, like Nova and St James's Market, getting the restaurants right is in these spaces is now a pretty big deal. And to select the best restaurants for Bloomberg, they definitely had the right man for the job, Bloomberg's own Richard Vines.

He's been curating the restaurants that are joining the Arcade for over a year at this stage and it's an undeniably impressive line up so far.

And how do we make our way there?

Both Cannon Street and Bank station have exits within sight of the Arcade, so you're better off heading to one of those. As for another way of pinpointing the location, it's about a two-minute walk from The Ned. 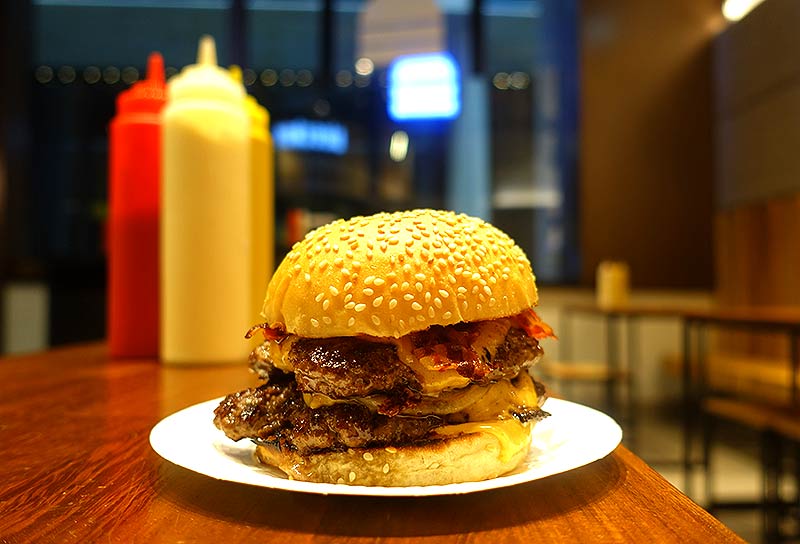 The mighty Bacon Double at Bleecker

And what's there so far?

There are ten restaurants planned, and of those four are up and running. They are:

Bleecker: We've said it many a time, but Bleecker are very high, perhaps top, of our list of favourite burgers in London. So news of a new Bleecker always goes down well. This is bigger than their Victoria spot with an interior that harkens back to a New York subway. And there's space outside to grab a seat too. If you haven't been, go now - you won't regret it.

Caravan: Of the restaurants that are open at the moment, Caravan is the one that caters most to the brunch crowd. So if you fancy a weekend Caravan brunch but can't face a queue - this is definitely the Caravan to head for (at least for now). And their desserts are very on point at the mo, from our recent experience. 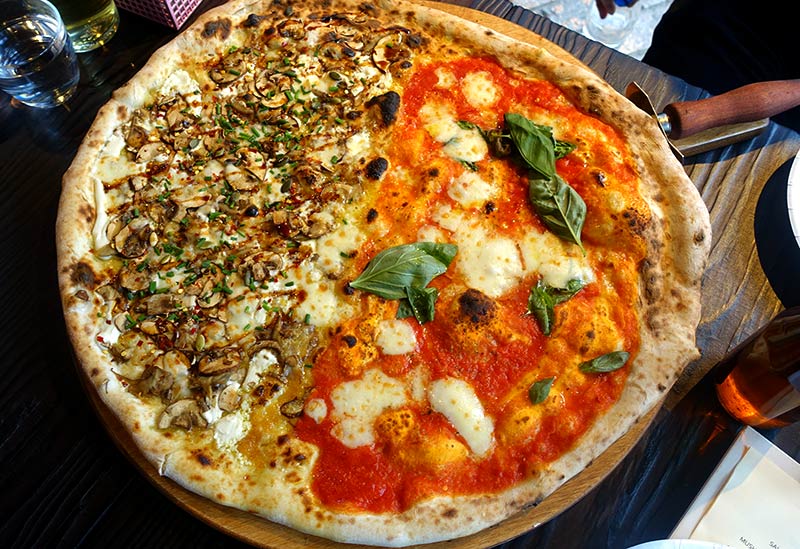 An enormous Homeslice pizza - half margherita, half mushroom, ricotta, pumpkin seed and chilli

Homeslice: Despite this being the fourth Homeslice, this is actually the first time we've visited one. Which, on reflection seems to have been a terrible oversight, as we now see what we've been missing out on. Head here for very good pizzas twice the size of your head, and a revamped drinks at this new location too. And a vegan pizza too - that's the kimchi, porcini cream and basil. Even if you're in the pub opposite, we think you'll be drawn in here to grab a slice to go with your beer. Because, why not?

Vinoteca: The largest Vinoteca yet, and with more space for just popping in for a quick glass of wine than the others we've been to. Which is a very good thing in our book.

Coming before Christmas, we have both Ahi Poke (you can't open a space for restaurants in London without catering for the poke crowd), and the arrival of Koya in November. This is the first Koya since the opening of Koya Bar in Soho - so this is a Very Big Thing. And the restaurant will be much larger than its Soho sibling too. Find out more about that here. 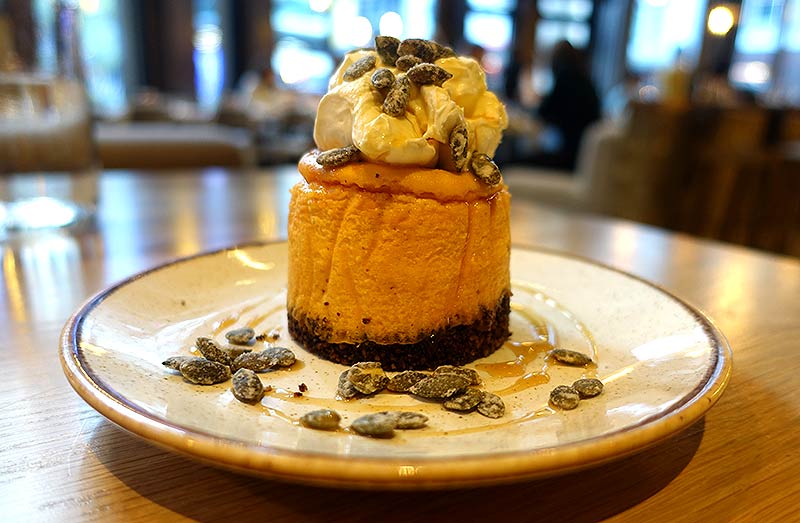 But that's not all?

That leaves us with four more to go, following in Spring 2018. And there are some big hitters on the way. First up is Andrew Wong's first new restaurant since opening A Wong in Victoria (which also won its first star a few weeks back).

There's another that we're particularly excited about. It's the latest from JKS, the people behind Trishna, Gymkhana and Hoppers. They're trying something completely new for their Bloomberg Arcade spot Brigadiers - it'll essentialy be an Indian gastropub that's taking up a huge corner spot on the building. That sounds perfect for the area.

And there's one more that's been announced - literally just as we're writing this up. Ekte Nordic Kitchen, bringing that Nordic touch to the Arcade. That's coming from Soren Jessen, the man behind 1 Lombard Street and who's going back to his Nordic roots with this opening. 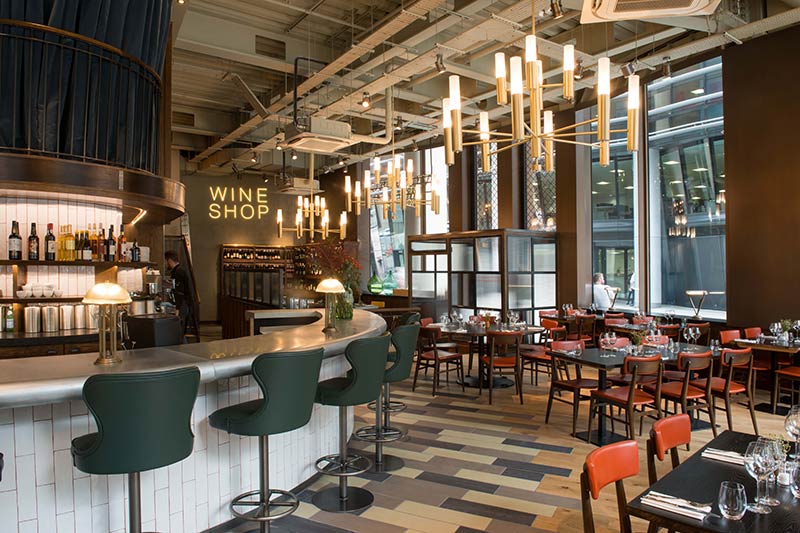 So that leaves just one...

Yes - that's just one remaining restaurant yet to be announced. And given the above - we're going to be listening VERY intently for any news about it.

Bloomberg Arcade is another piece in the puzzle that's starting to make the City a food destination all in itself - and that's been a long time coming. With the restaurants here, Neil Rankin's nearby Temper, as well as Blacklock City and The Ned very nearby, the City's time has come...