Test Driving Blacklock in the City - chops, cocktails for a fiver and all the hits 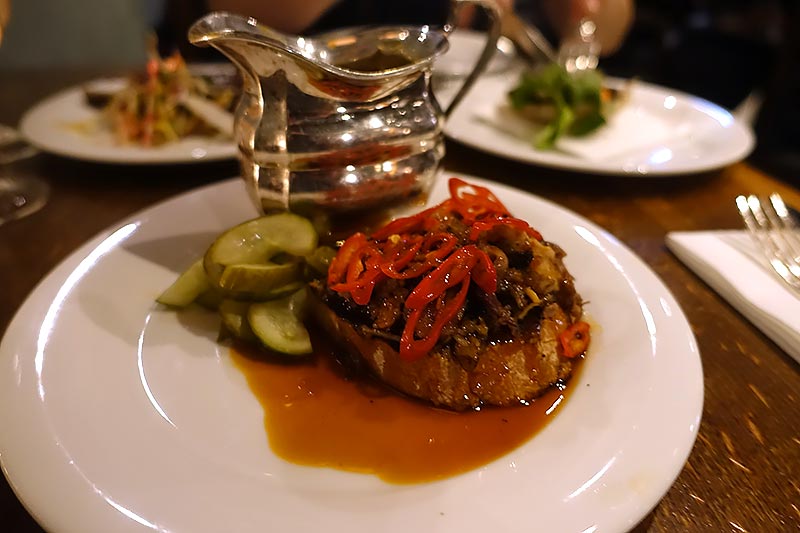 Pigs head, chillies and a whole lot of gravy

What can you tell us about Blacklock?

Blacklock, in its original location at Soho is all about the chops - and this City incarnation follows that template. So expect lots of pork and lamb chops, as well as some choice steak cuts and VERY good value cocktails. But in the City.

Whereabouts in the City?

Near Monument, it's about a two-minute walk from Monument station.

We REALLY struggled on this. We eventually settled on the Drake and Morgan bar, The Folly, but pretty much everywhere was heaving. If there's a hidden gem in the area, let us know in the comments below.

Frankly speaking, the bar at Blacklock is the nicest in the area and if you can grab one of their barstools then absolutely head there. 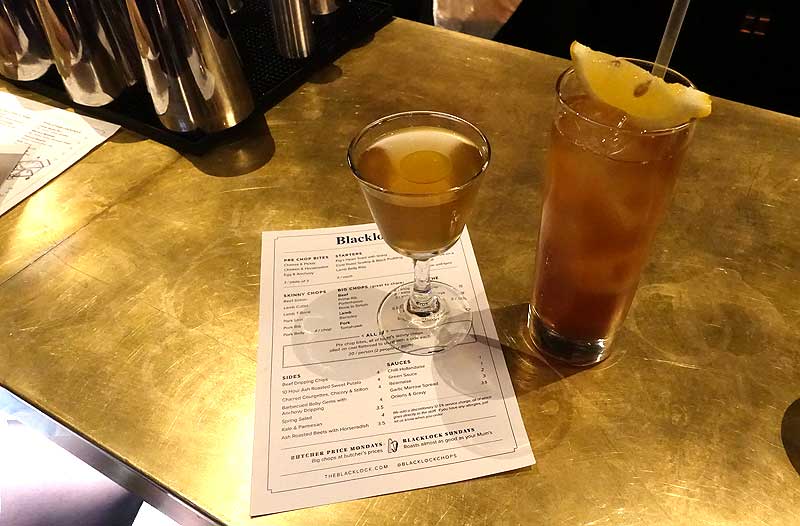 And their cocktails are still a fiver?

Yes, even though this restaurant is firmly in the realm of moneymen, the basic prices for Blacklock are the same as the Soho branch. So it's a STEAL for the area. This means you get a small selection of cocktails for a fiver (like a spring negroni or an Old Fashioned) or you can spend a teeny bit more (£7.50) for some more cocktails. We think spend the extra for their Nettle Gimlet. Because you're worth it.

What if we fancy a cocktail later in the evening.

Then you go for the majesty of the cocktail trolley. Of COURSE you need to order from that. So let them make an Old Fashioned or a Negroni tableside. A perfect way to end the meal, we think. 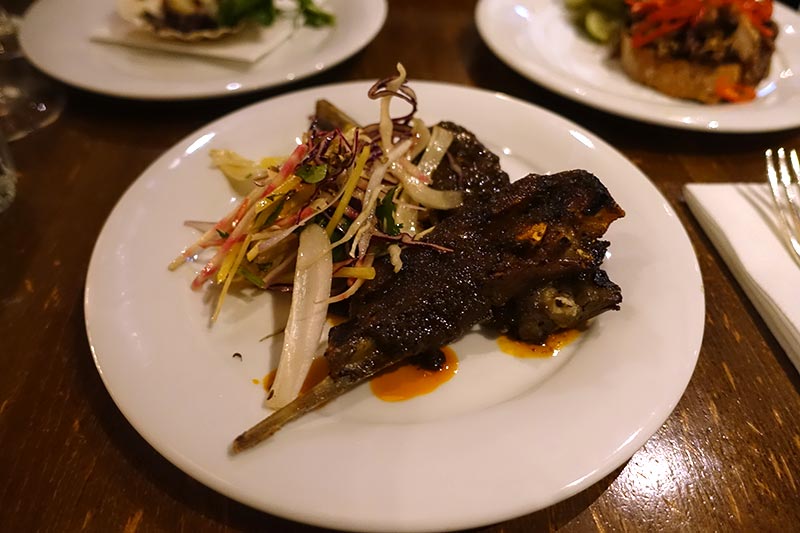 And how about the look of the place?

They've really landed on their feet with this location, it looks very similar to the original Blacklock, so much so that you'll think you're in Soho until you head upstairs. It's bigger but unmistakenly Blacklock.

As for the best seat, there's a lovely table for about six under some arches at the back of the room and we liked the raised tables by the kitchen too.

But enough of that, onto the food. Anything new?

There are a couple of new dishes on the starters and dessert sections of the menu. First up is the pig's head toast with gravy. That's plies of pig's head meat and chillies on toast, with gravy to pour on top of it. It's epic (and only £5!). A must order. More on dessert in a bit.

If you haven't been to Blacklock before, you'll also want the pre-chop bites too. Like canapes before the main event, order these while deciding on what you're going to have. 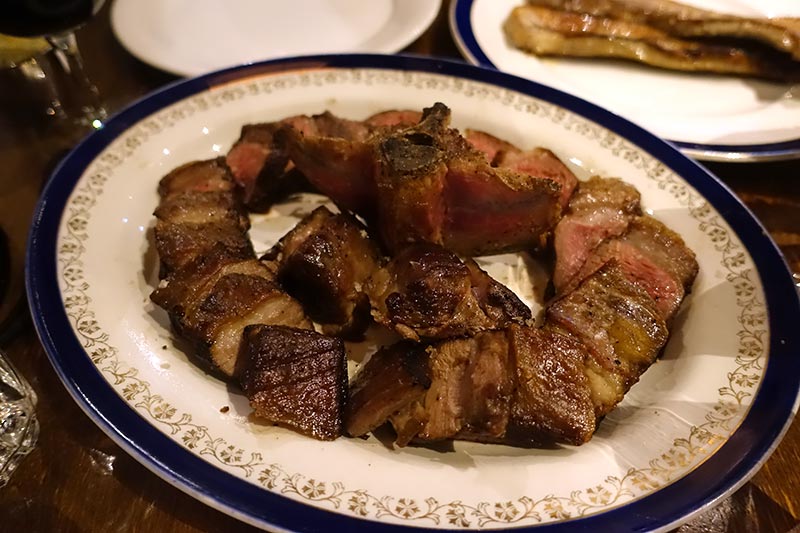 The Barnsley chop - plenty for two

And the chops are the main attraction?

Of course. If you haven't been (and even if you have) the All In is menu option to go for. That includes the bites and all of the skinny chops (inc lamb cutlets, pork loin, beef sirloin and more) all piled on bread which the juices have soaked into. It remains one of the greatest dishes in town.

Of course, leave room for sides and also the new sauce, garlic bone marrow spread. This is obviously as must-order as it sounds (and goes very well with the lamb). 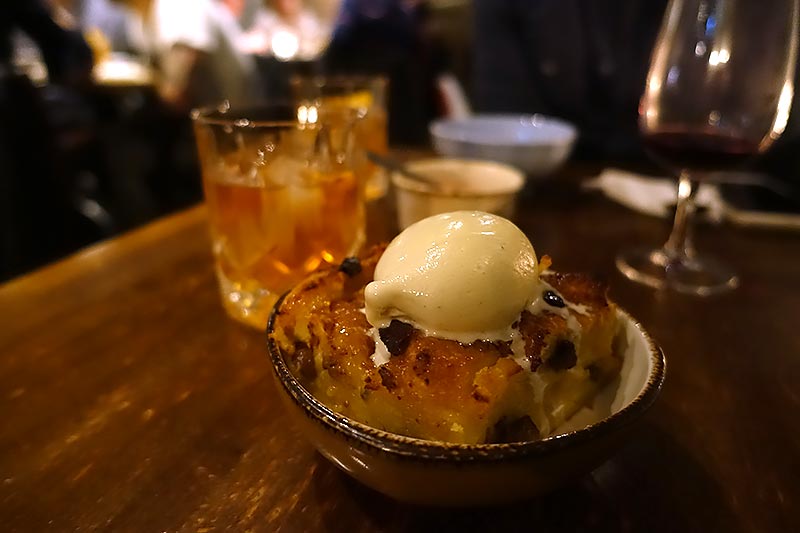 Still the cheesecake for dessert?

They still do a very fine cheesecake, served out of a big dish, for dessert, but there's a new dessert too! That's bread and butter pudding - but you might want a short break after the chops if you're going for that.

And some wine too?

There's a good selection of wines from the tap - all available from glass up to litre sizes (from £4.50 125ml glass to £30 for a litre of the house wine).

But given the locale, they've also added more expensive varieties too. So if you fancy splashing the cash, head over to their "favourite wines" section. Prices are up to £150 there, but the markup is low so you may grab a great deal.

It's been too long since we've been back to Blacklock but it's every bit as good as the original. If Soho's a little too far, and if waiting for a table isn't for you, then the City is the place to head for. Blacklock fans will be very happy.

Hot Dinners were invited to Blacklock, prices are correct at the time of writing.

How to book: email cityreservations@theblacklock.com