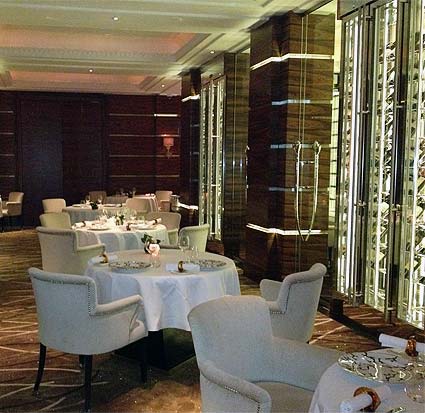 What can you tell us about Alyn Williams at the Westbury?

This is the first solo venture from Williams, the former head chef at Marcus Wareing at the Berkeley and the second new restaurant to open at the Westbury hotel in a matter of months (following The Gallery), making the Westbury a plausible new destination for eating out in London. Williams honed his craft, like Wareing, at Gordon Ramsay Holdings, working at both Royal Hospital Road and Claridges.

It's certainly aimed at the fine dining crowd, but aims to bring something new to the table, so the menu leans more to the current vogue for pared-back dish descriptions while pairing luxury ingredients with more unusual foraged fare. It'd certainly be a good bet for foodies who fancy a bit of luxury (at a fair price). So expect thick carpets, tables spaced well apart from each other and more serving staff than you'd know what to do with.

Where should I meet for a drink?

You're just off Regent street, so there are plenty of options available but we'd recommend a swift cocktail at Pollen Street Social, which is just around the corner. Alternatively, live life dangerously and head for the bar at the Westbury recently memorably described by the Times AA Gill thus: "Everyone had been shagged by a stranger in the Polo Bar at least once." Alternatively there are a couple of bar tables in the restaurant itself to sip a glass of the house champagne Ruinart, while waiting for someone.

The room had four large circular booths, one in each corner, and we'd recommend one of those if you can get them ( suitable for four to six people).  However, the best table by far is the glass-enclosed wine room - a beautiful table for about eight to ten people where they'll receive particular attention from the sommelier at wine and food matching events.

It is - slices of potato sourdough and beer and star anise rolls, served with English butter and whipped caraway butter.

What would you recommend we order?

The menu is in two sections - the seven course tasting menu for £55 or the three course a la carte for £45 - both of which are really very good value for central London, particularly given the level of service and comfort here. The menu itself takes the form (also now seen at Marcus Wareing as well as Roganic) of listing out the primary ingredients of the dish (e.g. "Dorset snails/malt soil/chickweed").

We went for the tasting menu which lasted a leisurely three hours. Of that, an immediate standout dish was the French onion consommé with brown and white crab and a mixture of consommé in liquid and jelly form, served with crunchy gruyere wafers. Yes, it was as good as it sounds.

Other standouts were the Dorset snails with malt soil and chickweed (although this dish divided us) and the guernsey bass/ watercress reduction/truffle/barolo". We also loved the meltingly tender Devon red beef sirloin with red wine which was served up with teeny roasties, cool mashed turnips and oxtail croutons. Perhaps the most surprising dish of the evening was the Cotswold white chicken/ hen of the wood / smoked egg/ charred leek. The charred leeks alone made us look at those vegetables in a new light - but it was the smoked egg yolk, the smell of which hits as you break through, that made this dish a triumph of innovative flavours and textures.

Dessert - tiramisu with a lovely nutella brioche was good, but not mindblowing. What we really wanted much more of was the creme Catalan with peargranita and pine sorbet which came as a tiny intermediate dish, when we could have eaten a massive bowl of it.

Absolutely - a couple of menus worth. Each menu - tasting and a la carte has a wholly vegetarian version, non-meat eaters will be very well catered for here. In fact there were a couple of items on the vegetarian menu that we rather coveted, like the "smoked egg/celeriac/truffled soldiers" which we'd love to see on both menus.

And what about wine?

The restaurant has a frankly astonishingly good value wine list. Usually restaurants like this don't give much away under the £40 mark and while you can happily spend a small fortune here, helped by the services of sommelier Alex Gilbert (previously at Le pont de la tour) there are plenty of reasonably priced bottles here - such as a Languedoc - Roussillon Savignon Blanc for as little as £19.50 or a Louis Latour Chardonnay/Viognier for £24.50.and 150ml wines by the glass starting at £5.50. Gilbert will also match wines to the tasting menu - including a surprising Cornish beer he came up with to pair with the snails.

Fine dining in London is getting to be a crowded market, but we think there's room for Alyn Williams to do well at the Westbury, not least because both food and drink are priced so reasonably. His menu - and take on food - is interesting enough for him to stand out from the crowd and the seriously friendly waiting staff here will help to make this a restaurant with a bit of posh, rather than a posh restaurant.

Hot Dinners were invited to eat at Alyn Williams at the Westbury.  Prices are correct at the time of writing.