[SIGPLUS_EXCEPTION_SOURCE] Image source is expected to be a full URL or a path relative to the image base folder specified in the back-end but /blog/2013/chopshop/gallery is neither a URL nor a relative path to an existing file or folder.
0
Shares 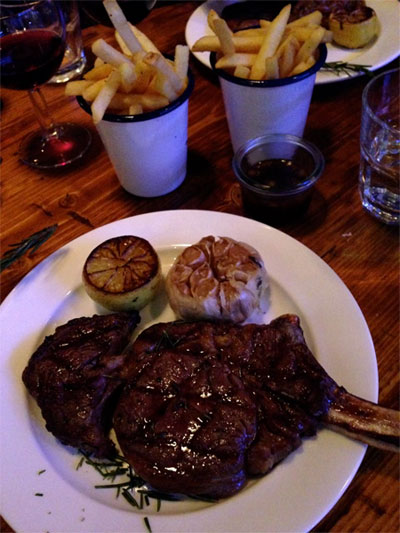 What can you tell us about Chop Shop?

Chop Shop is the first UK venture from the New York-based Altamarea Group. Run by Chef Michael White, the group’s six Manhattan restaurants are all Italian-inspired but with Chop Shop, the menu is very much American in style with a focus on premium steaks and – you guessed it – chops. The design takes the ‘London/New York’ template as a starting point – exposed brick work, black and white tiles, industrial light fixtures – and adds a few quirks such as a wall of cleavers, and old milk churns.

Chop Shop is on Haymarket, perhaps not the most obvious place for a new opening that’s aimed very much at the Soho crowd. Haymarket, running roughly between Trafalgar Square and Piccadilly Circus, is understandably chock full of chains and tourist traps, with Byron Burger being the only place of note until now. Chop Shop is close to full on our visit on a Wednesday night, however, so the location seems to be working for them so far.

The restaurant is split over two floors, entry-level and basement, both long narrow rooms with small wooden tables along the walls. There’s not a lot to differentiate between the areas so there’s not much chance of table envy here. Even the bar would be a perfectly pleasant place to prop yourself up for the evening.

Drinking options aren’t great on Haymarket. The bar at Chop Shop itself would be a fine place for a quick drink but if you’re in the market for a pre-dinner cocktail (as a Hot Dinners reader, we’re pretty sure you are) then a short walk will take you to Hix, The American Bar at Brasserie Zédel or the wonderful bar at One Leicester Street.

And what should I order?

We hate to start on a criticism (we’ll make up for it later, promise) but the menu is a little confusing to say the least: there are ‘jars’, ‘crocks’, and ‘planks’, a huge middle section of ‘steaks & chops’ and then a selection of ‘mains’ where you’d normally find the desserts. That they felt it necessary to include a page on the website explaining these different sections should perhaps serve as a warning sign that this perhaps isn’t the best approach.

Thankfully, all our ‘dishes’ were top-notch. Two jars of smoked trout (£5) and crab cocktail (£7) turned out to be exquisitely made pâtés, both fresh and well balanced and served with warm slices of toasted sourdough.

We skipped over the ‘planks’ (cured meats and cheeses) and ‘crocks’ (meatballs, pasta pie) as steaks are the order of the day here. A 35-day aged beef rib chop brushed with rosemary (£26) was tender, perfectly cooked and given extra juiciness by the addition of a red wine bone marrow sauce (£3). A whole range of extra toppings and sauces from fried eggs to salsa verde are also on offer, allowing a good deal of customisation on the basic steak options.

Desserts were simple but well done; the chop shop brownie sundae with peanut butter sauce was rich and satisfying, as was the panna cotta with raspberry coulis (both £5), although the cream was not perfectly set.

A brief but well thought out wine list features four whites and five reds, ranging in price from £19 to £35. After ordering steak, we went for the Cosecha Tarapaca, a Chilean Cabernet Sauvignon that was the perfect accompaniment to our meal, and an absolute steal at £23. Craft beer fans should be happy with a menu that includes Brooklyn, Goose Island and London’s Meantime.

Aside from a confusing menu, Chop Shop does exactly what it says on the tin. Offering well-cooked American comfort food on a central London street bereft of good restaurants, Chop Shop is on to a winner.

Prices were correct at time of writing. Hot Dinners ate as guests of Chop Shop.