[SIGPLUS_EXCEPTION_SOURCE] Image source is expected to be a full URL or a path relative to the image base folder specified in the back-end but /blog/2012/gillrays/gallery is neither a URL nor a relative path to an existing file or folder.
0
Shares 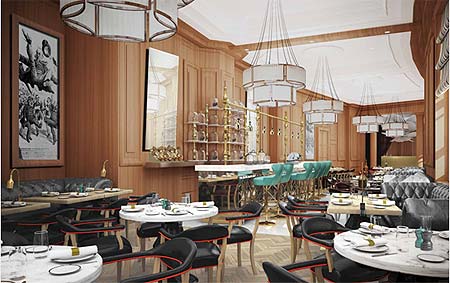 What can you tell me about Gillray’s?

It’s the revamped restaurant and bar of the Marriott in County Hall. The whole place has been refitted and the restaurant has now become a steakhouse, specialising in its 1kg Bullshead steak (more of that in a bit).

County Hall is right on the South Bank, just beside the London Eye and only a few minutes’ walk from Waterloo station.

Who’s it suitable for?

It’s ideal for the hotel guests and anyone looking for a good steak after a long walk along the South Bank. There’s very little in the area so this is going to be popular.

As mentioned, Gillray’s has little competition in the immediate area, with the exception of the Park Plaza hotel nearby, so we’d definitely recommend meeting up in the Gillray’s bar beforehand.

We’d been into the County Hall bar a few months ago and since then the bar has been through a major upheaval, perhaps more than the restaurant itself. The main difference on the bar menu is a large and interesting cocktail list, with a particular focus on gin (there are dozens of varieties on offer). Taking the bar manager’s advice, we went for a GLC (Plum chase vodka, quince liqueur, basil syrup with lemon and blood orange juice).

Both the bar menu and drink itself, an impressively strong fruity cocktail, were a massive improvement on our earlier experience, and we’d happily try more drinks from the menu.

Either by the windows or in the middle of the room to get a glimpse of the view of the Thames. The view is admittedly much better in the bar and it’s a shame there’s a big tent outside the back of the Marriott which considerably detracts from the restaurant view.

Not exactly – instead, there are complimentary “yorkies” – cheese filled Yorkshire puddings served with horseradish sauce. It’s a pleasant change from the traditional bread and butter, and fits well with the overall steak theme.

We went for oysters to start with to ensure that we had room for the steak, which is the main event here (although there are a few alternative mains on offer too). For mains, we had the T Bone and simply couldn’t avoid ordering the huge Bullshead steak. This was a 1kg beast of a steak that came with its own dog tag. Of the 50 ordered since the restaurant opened, Hot Dinners became only the 16th person to actually finish it (you may detect a note of pride however misplaced here). It was a fine steak  and despite the worry that such a large cut could affect the cooking, it was cooked perfectly to order. Sides like truffled chips were pretty good too, but the steak took most of the eating.

After this, desserts were mainly eschewed, but we did manage to try some decent salted caramel ice cream despite having really eaten more than a sane person should for dinner...

The wine list is well priced, but hasn’t had quite the same effort put into it as the cocktail menu, which is where the best drinks are to be had. The cheapest white is £28, which is pretty punchy even considering this is a riverside hotel. That said, we did really like our Californian Zinfandel at £38.

We enjoyed the meal we had at Gillray’s. While it’s going to have trouble attracting the crowds from Goodman or Hawksmoor, it’s a good bet for a steak on the South Bank where decent places to eat are thin on the ground. We particularly liked the bar and would highly recommend that if you’re in the area.

Hot Dinners were invited to eat at Gillray's. Prices were correct at time of writing.