Something for the weekend: The Bell at Ticehurst 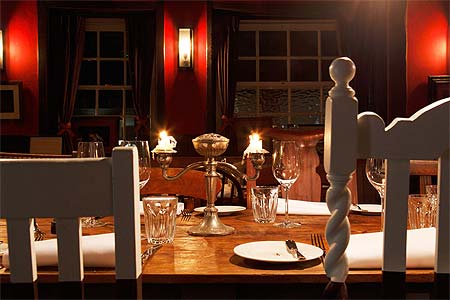 What can you tell me about the Bell?

Having just spent a night at the newly spruced up Bell at Ticehurst, we have to confess to feeling pretty jealous of the locals and their spanking new inn.

The sign outside points one way to a 14th century church and the other way (towards the Bell) to 21st century ding-dong, but the origins of the Bell are more than 200 years old. It's just that the new owner has spent upwards of £2m bringing this old inn firmly into the 21st century whilst keeping and enhancing a lot of its original charm.

How can I get there?  Is it far from London?

It doesn't take any time at all to get there - barely an hour on the train from Charing Cross (of course it helped that we were travelling first class, and had brought our own champagne cooler and bottles of local West Sussex fizz).

It's a 10 minute taxi transfer from Wadhurst station to Ticehurst where you can begin your overnight decompression from London stress with a glass of almost-local Nyetimber.

And what should I expect when I walk through the door?

Everywhere you look, there's a visual trick to enjoy - from the bearskin made from carpet, to the trumpet urinals and bowler hat lights. There's a restaurant and bar area, a fabulous stable with a table (which is where we dined) and a massive assembly room upstairs for larger parties.

Who's in the kitchen?

The new owner hasn't just spent money on the fixtures and fittings - he's also put a top team in place. In charge of everything front of house are Sebastien Jauvin and Alison Stubberfield. Sebastien has worked with Richard Corrigan at Lindsay House, Bentley’s Oyster Bar and Grill and Corrigan’s in Mayfair while Alison has also spent time with Corrigan at Bentleys before moving to be restaurant manager at Theo Randall at the Intercontinental. In the kitchen is James Horn who's most recently been at Alexander House in East Grinstead.

Were were there to enjoy James's game dinner - the Bell puts on regular shooting stays - with wines matched by Wine Chap's Tom Harrow. Dinner began with a faultless game tea, served in a mismatched china tea cup and saucer with oxtail dumplings and quails eggs which was paired with a glass of madeira.

This was followed with seabass and shellfish butter sauce (served with Hungarian dry Tokaji) a suitably gamey roasted Ashburnham pheasant with game faggot and liver sauce, finished off with a cheeseboard and lovely vanilla set cream with fruit compote. A similar banquet is served up when you come here on a shooting trip, with both bass and pheasant dishes on the main restaurant menu.

Breakfast the next morning was a choice of the full English or we could have picked homemade granola, Eggs Benedict or smoked salmon with scrambled egg. Everything came cooked to order, with slabs of thick cut bread, homemade jams and a bottle of local apple juice. 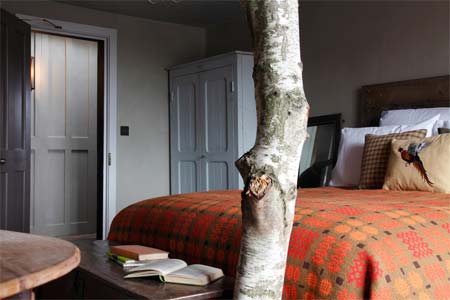 And after all the gastronomic exertion - what are the rooms like?

Our bedroom - Hush of the Trees - was one of the new rooms above the bar and absolutely massive with a huge window seat, perfect for watching the world go by (or in our case the town crier the next morning - yes, they still have them in the countryside it turns out).

Decor was part country chic, part madcap with a barber's chair in one corner, a flat-screen telly and a strangely empty mini-bar with a pot of fresh milk in it. Our beds were really very comfortable and we had a faultless sleep - although perhaps the amount of wine we'd imbibed over the course of the night had something to do with that.

There are also a few airstream trailers in the back garden and we understand that they'll soon be available to stay in too.

And what else can I see in Ticehurst?

We needed to clear the cobwebs away the next morning - so took a short stroll through the village which has a few decent antique shops and a very pretty 14th century church complete with medieval stained glass and choir stalls carved by 'Mouseman’ Robert Thompson. Just what you want really from a short stay outside town.

All in all, the Bell is a pretty much perfect example of what Londoners want from a night away from town; easy to get to, lovely to look at, London-levels of service, food and drink and something less chintzy than the country norm.

Hot Dinners were invited to stay at The Bell. Prices are correct at time of writing.