[SIGPLUS_EXCEPTION_SOURCE] Image source is expected to be a full URL or a path relative to the image base folder specified in the back-end but /blog/2013/ember-yard/gallery is neither a URL nor a relative path to an existing file or folder.
0
Shares 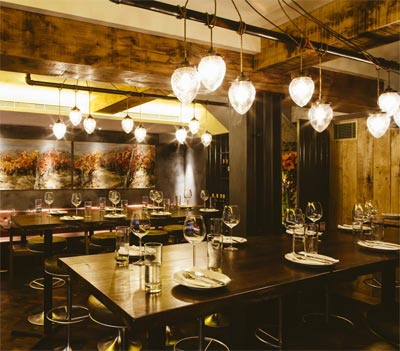 Well you're half-right. This is the latest restaurant from the folk behind Opera Tavern, Salt Yard and Dehesa. They're billing it as somewhere which takes its inspiration from rural Basque and Italian methods of smoking and grilling. In practice the kitchen here has the mother of all bespoke grills which executive chef Ben Tish has used to base a menu around.

The top end of Berwick Street which is fast becoming a Soho street to watch (with Polpetto reopening soon and Alan Yau's place coming to The Endurance). So it's also a handy pitstop for anyone doing shopping on Oxford Street too.

Where should I meet friends for a drink beforehand?

You're not far from the Edition hotel on Berners Street and there's also the bar at the Social Eating House one street along on Poland Street.

A mixed bunch - every age group was represented here, although the larger younger groups tended to be downstairs while the ground floor was more couples and older diners.

Depends who you're here with. As above, if you're a boisterous group you might prefer downstairs which has more of a club vibe, if you're upstairs then there's a range of stools at high counters or tables around the edge of the room. Clearly the best seats would be the handful at the pass looking into the mouth of hell (aka the monster grill they've installed here).

Anyone who's a fan of Opera Tavern and its ilk will feel quite at home here with a menu that starts with a few well chosen bar snacks and ranges through charctuerie and cheese platters to a range of fish, meat and vegetable main courses. Dishes are designed for sharing.

We started with a plate of whipped lardo crostini with guindilla (£4) while we worked out what to have. We somehow managed to miss the grilled flatbread with honey, thyme and smoked butter at the top of the menu, but the table next to us had it and it looked great, particularly if there's more than two of you.

To kick things off we chose smoked chiorizo skewers with saffron aioli (£2.50 each) super juicy and well smoked as well as Iberico Pork Pinchose Morunos (£4.50 each - we should have had two rather than trying to share one).

From the fish section, grilled prawns with Majorcan salt and chilli were good, but not as brilliant as the cuttlefish with roast pumpkin, n'duja and wild oregano (£7.25). Of the meat dishes we loved the whipped jamon butter that came with the Iberico presa (although a recent presa at Foxlow nudged just ahead of this dish). Fans of the foie gras Iberico burger at Opera Tavern will definitely want to try the smoked basque beef burger with idiazabal and chorizo ketchup (£7) but as at Opera Tavern, this one is pretty small for the money and honestly you won't want to share it.

In an effort to balance the meal we also chose two veggie dishes - both of which really stood their ground against the meat and fish ones, including chargrilled chicory with vin cotto (£4.75) and a must-order parsnip buttermilk chips with manchego (£5.50). Call us traditionalists, but while it's sometimes good for dishes to just come out as the kitchen makes them, we'd have liked these to be served along with the meat and fish.

Desserts all sounded as interesting as the rest of the menu but the brown butter panna cotta with Malaga raisin ice-cream we had couldn't compete with the marvellous donuts (sic) with quince jam and muscavado custard (£4.50) which were just as heavenly as they sound written down.

If you haven't already seen all the pictures of smokey cocktails doing the rounds on Twitter take our word that you have to try something from the cocktail list. We're sure their classic cocktails are good, but why choose those when you can go for Ember & Ash (raisin-infused run with PX and Bourbon smoke). It's a no-brainer. From the wine list we couldn't help picking the Basque Txakoli (£30) with its hint of fizz.

Buzzy and brilliant - Ember Yard is already a hit. But if you're as greedy as we are, you'll find it easy to rack up quite a hefty bill. The good news is that the food is more than worthy of the hit your wallet will take, and with so much on the menu you'll want to try, this place will bear repeat visits.

Prices were correct at time of writing. Hot Dinners were invited to eat at Ember Yard