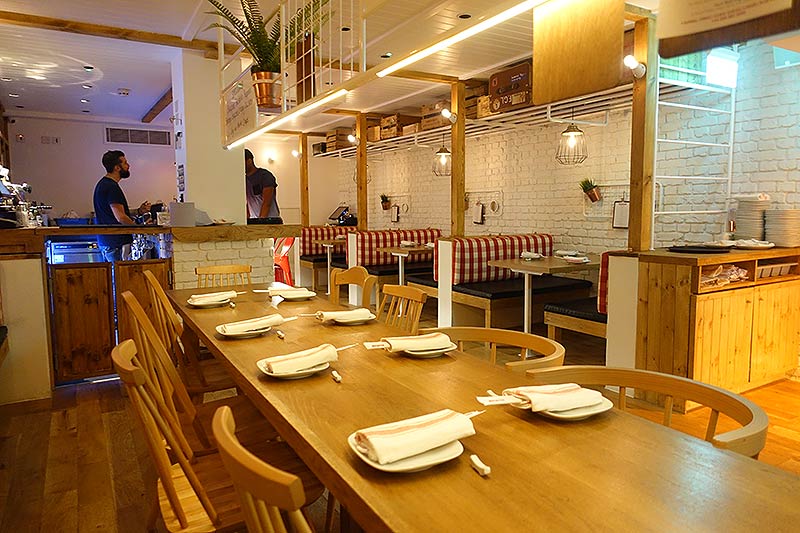 The ground floor room at Red Farm Covent Garden - with four-person booths in the back (and two-person booths just out of sight on the left).

What can you tell us about Red Farm?

Red Farm originally opened in New York's West Village as a collaboration between chef Joe Ng and restaurateur Ed Schoenfeld, aiming to bring a modern sensibility to dim sum restaurants. Both a neighbourhood restaurant and a big draw for out-of-towners too, it was a huge success - some of that down to its infamous Pac Man dumplings (we'll get back to those in a bit). It expanded downstairs with Peking duck feasts at Decoy (which we loved on a past visit to NYC) and again to a second restaurant in the Upper West Side.

This sees the pair opening the first overseas Red Farm right here in London - setting up shop in Covent Garden.

It's just off the main Covent Garden Piazza, almost next door to another successful New York import, Balthazar.

Afraid not - Red Farm is a walk-ins restaurant only. At the time of writing, you should be able to get a table relatively easily - but expect it to get very busy when word gets out. The original restaurant in NYC is famously busy, so we're expecting the same here.

The main restaurant is across two floors - ground and first. Both feature a large sharing table down the centre, with booths down the side. We really liked the two-person booths at the side - and if you can get them, they're the best option, we think. Both floors have the same look and feel - so either should be fine. 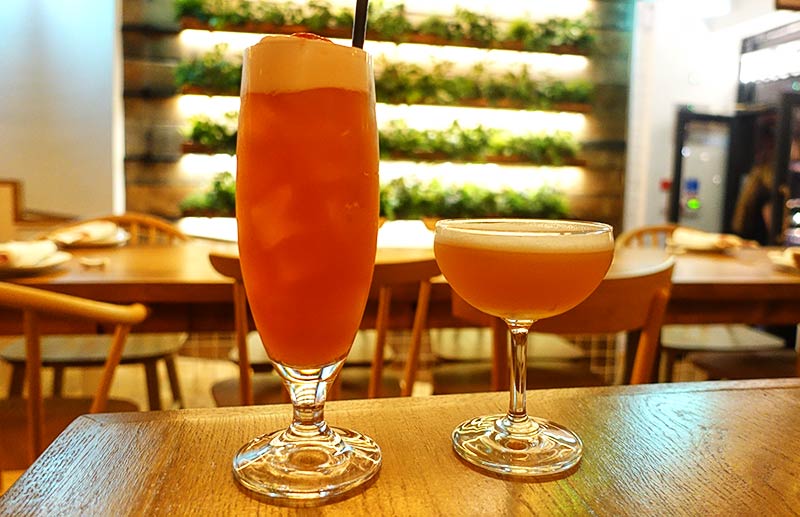 Kicking things off with booze. These are the Rum Raisin Daiquiri (very nice, but more cinnamon than raisin) and the Berry Basil (rum, strawberries, basil, pressed pineapple and lime). Both £13.

At the time of writing there isn't, but that's about to change. On the second floor, is the hidden-away bar Toots n Hoots (named after the pair of pictures of owls that adorn the walls up there). We're still waiting to hear exactly what the offering will be up there - it'll be a mixture of cocktails and food - but we'll update as soon as we do. It's a lovely-looking hideaway though - we'll be back to try it out when it opens by the end of September.

And what's on the menu in the restaurant?

We popped in on the third evening after opening - so things are still gearing up. Expect the menu to evolve and grow a little as the kitchen beds in, with more dishes from the original restaurant being added. That said, the food we had was pretty damned good, all the same. Expect a menu that's a mix of snacks, dumplings, larger mains and rice/noodle dishes. here are some of the high points from our visit... 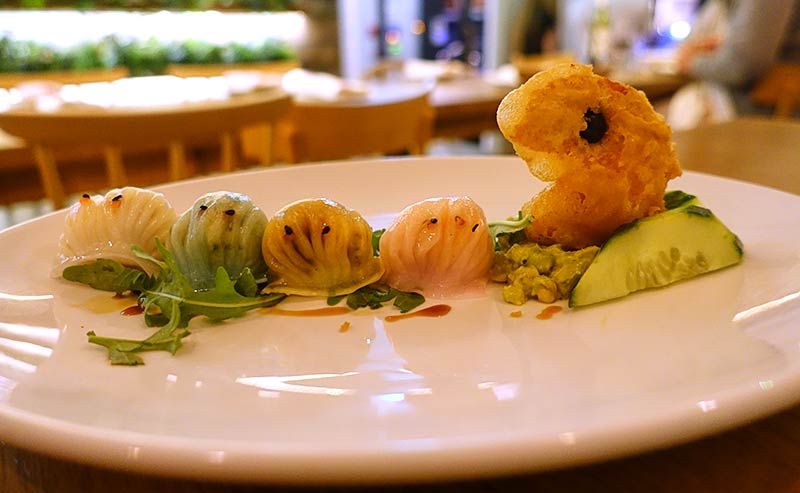 THE dish - Pac Man Shrimp Dumplings (£12) with the Pac Man made of fried sweet potato on avocado. The dumplings are good - but the main reason you're getting this is for the showmanship in the presentation. 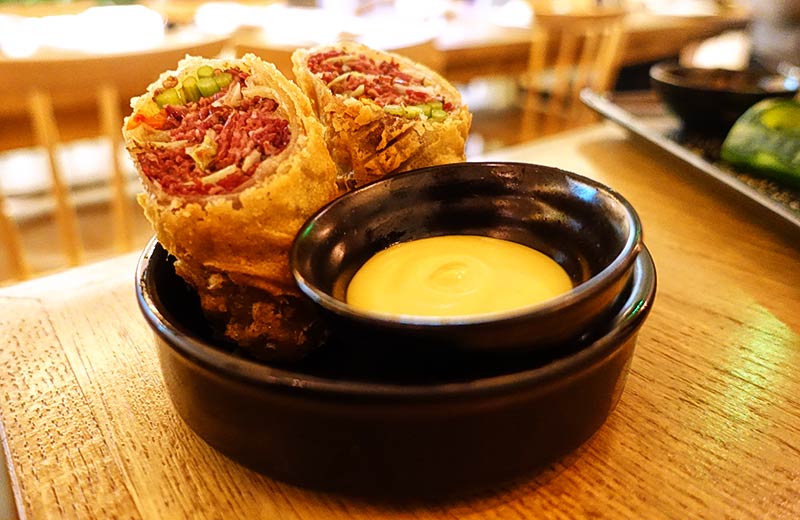 Pastrami egg rolls (£9) - a big hit from the original restaurant. Essentially a huge spring roll filled with pastrami. More than lives up to the hype - a must-order. 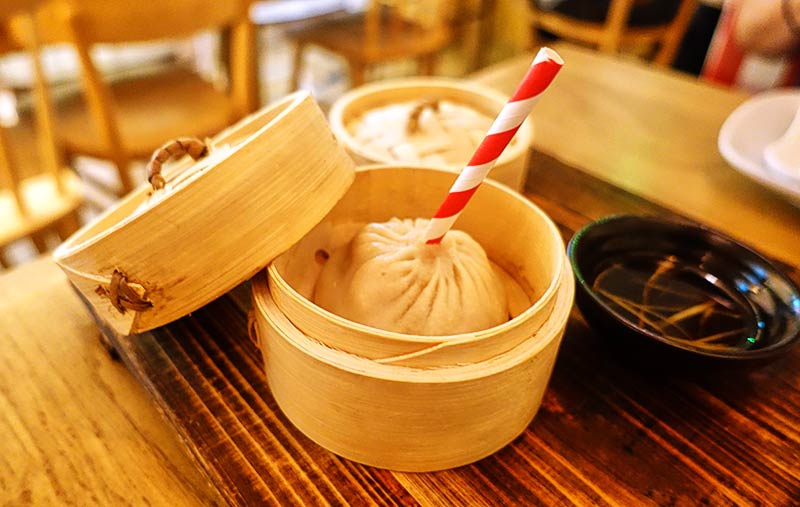 Another big hit from the original - pork and crab soup dumplings (£8) with teeny straws to help you get at the soup.

Marinated and grilled Dingley Dell pork belly (£10). Red Farm's pork chops are one of the big dishes from the original - which also is recreated from local pork - but we opted for this umami-rich starter instead. 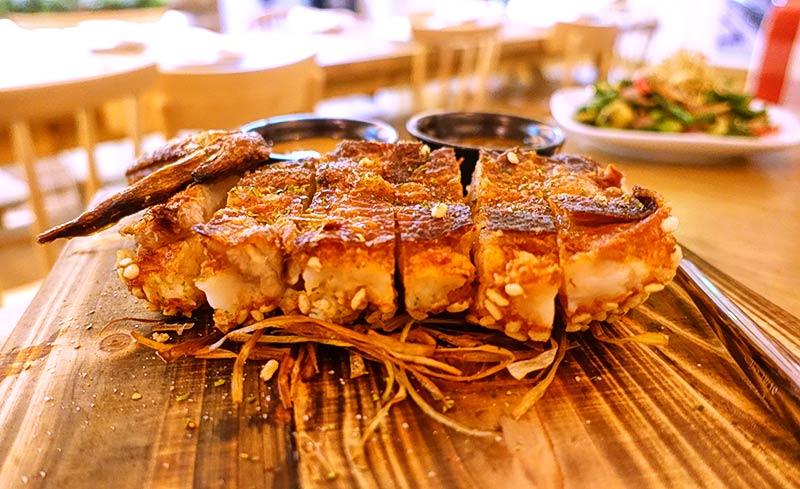 Currently only on the specials list - but another of the must-have dishes from the original restaurant, this is the shrimp-stuffed chicken. Essentially chicken on a bed of shrimp and then fried till wonderfully crispy. It is frankly astonishingly good - unlike anything we've had recently. If it's on - make sure to order it.

While there's a lot of meat and fish - you'll still find plenty of vegetarian options, including in the dumplings section. Here are a couple of dishes from our visit... 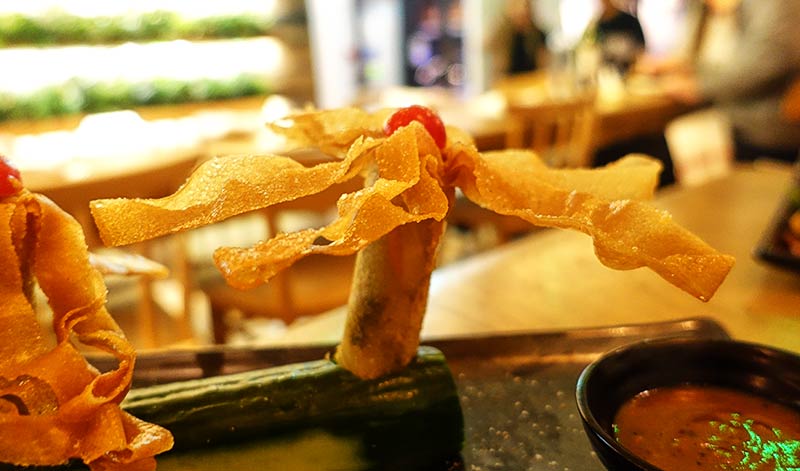 These are billed as "vegetable spring rolls shaped like a flower" (£8) so we just had to order. Again, the presentation is slighty bonkers - with the edible "petals" being a lovely touch. A real bugger to photograph, though... 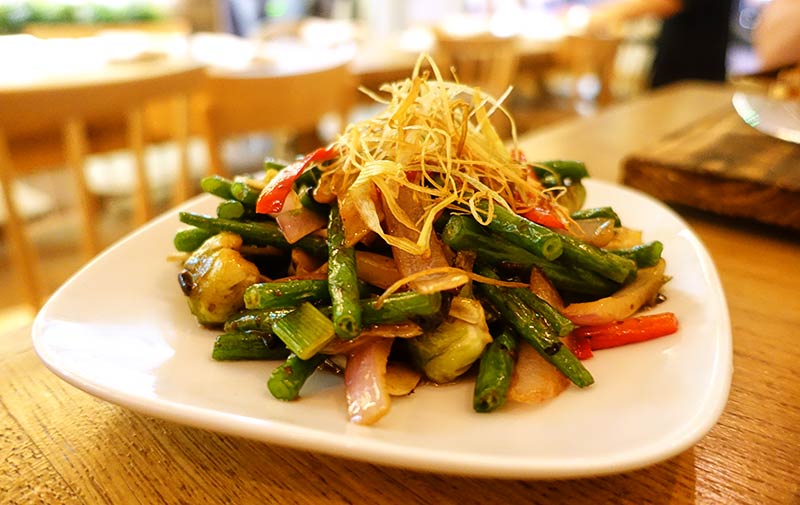 Sauteed string beans and brussel sprouts (£12). We have no idea how they managed to get these to taste so good. Even if you're not vegetarian, get these as a side for your main (they worked very well against the chicken).

As you can see above, we went straight for the cocktail menu after sitting down - with everything coming in at £13. As for the wine list itself, it's an affordable list which starts at £21 a bottle for red and white (as well as a Provencal rose at £26). As you'd hope from an American restaurant, there are a few bottles from the USA too - and good value, we thought. We went for a 2014 Californian chardonnay from Cannonball - on the of the priciest on the list at £46. We do love American chardonnay and would definitely recommend that.

There are a just couple of options at the moment. One is the fruit plate if you're feeling virtuous - but what you really want are these... 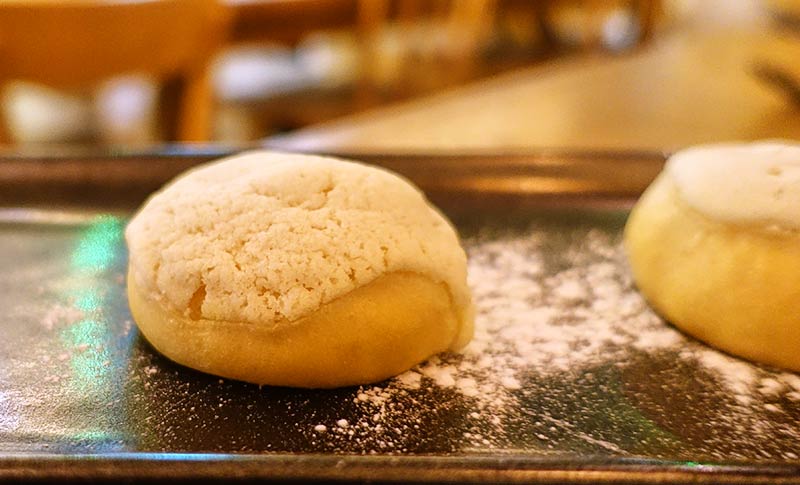 These are custard filled baos (£8). You'll see these on the menu and be counting down the minutes to dessert...

As the original Red Farm was such a big hit in New York, expectations are sky-high for their first international restaurant. When we visited, owner Ed Schoenfeld was looking after things front of house and you can expect chef Joe Ng to be making appearances in the coming weeks too. But while it's very early days, we can sense a big hit on the horizon for Red Farm. Already, the London kitchen is turning out super dishes that will only improve further. If you've been reading about the New York restaurant and wanted to visit - here's a chance for the same experience without an airfare. Recommended.

Where is it? 9 Russell Street, London WC2B 5HZ

How to book: No reservations, walk-ins only.