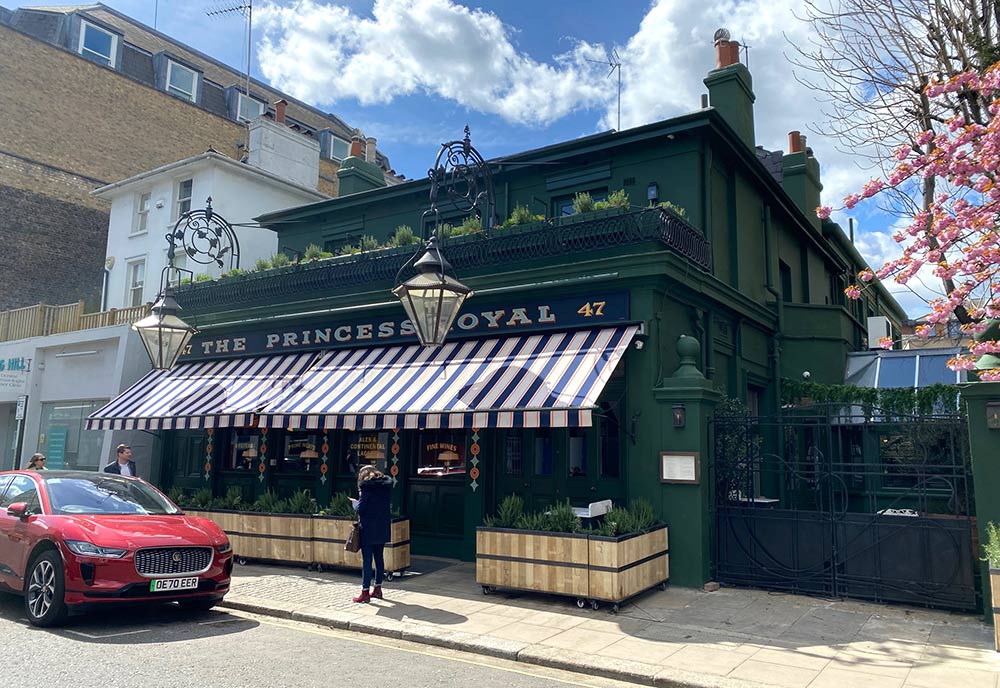 Outside The Princess Royal - to the right of the pic is the front courtyard and there's a lot more alfresco space out the back.

What can you tell us about The Princess Royal?

This is the latest pub from Cubitt House, the people behind The Thomas Cubitt, The Orange and various other pubs around London. Many of their pubs are getting a bit of a refresh but The Princess Royal is brand new to the group (they took over this site from Pomona's and it was The Commander before that).

One of the biggest changes to the Cubitt House pubs has been the relatively new arrival of Ben Tish (ex-Norma and Salt Yard). As their Chef Director, he's been revamping all the group's menus and he's created something brand new for this pub.

You'll find the pub just off Westbourne Grove (it's up the road from the corner where Sunday in Brooklyn is). On the tube, it's about a 5-10 minute walk from either Royal Oak or Westbourne Park. 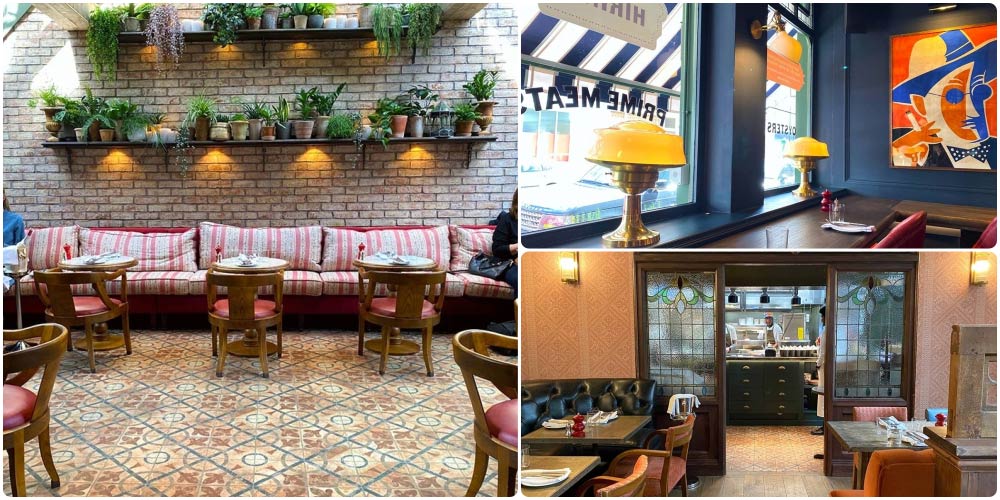 Clockwise from left, the conservatory room, seats by the front window of the pub and looking into the kitchen.

The pub has had a big (and very impressive) makeover and there are a number of areas to sit, so it depends what you're after. The conservatory is probably the best looking room, but if you're in a group, grab one of the tables in the room by the kitchen (there's no open kitchen as such, but you get a little door that leads into the action). In addition, there are plenty of seats at the bar, and we rather like the seats by the window too. Take a look at the pic above for a view of all three.

Late spring and summer is where the pub will really come into its own though - there's an extensive pub garden out back as well as a small courtyard out front. That's something to bear in mind as the weather heats up.

Onto the food - what to expect?

While there are a few influences on show here, there's a strong Mediterranean flavour to the menu (somewhat appropriate, given Tish's last stint at his Norma restaurant, which specialised in Sicilian cuisine).

There's also a significant raw bar showing here too - with oysters. crudo and tartare all on offer. Here's a taste of what we had: 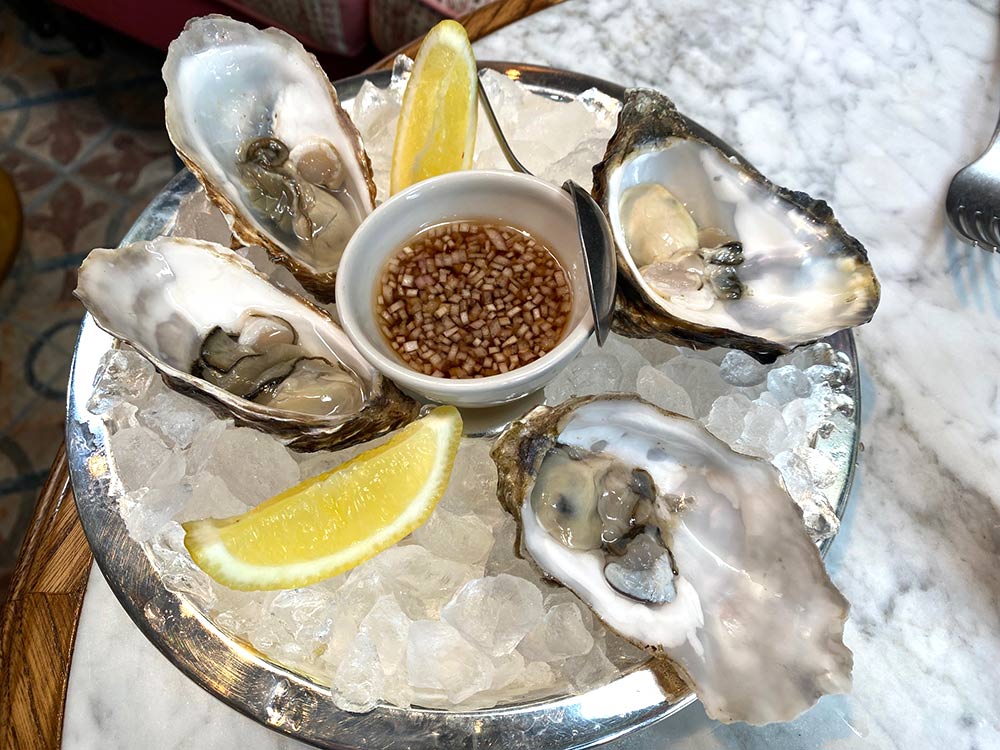 The seasonal oysters are £4 each, so ask for what's on offer. We had a seletion with the shallot and marsala dressing (there's a hot chorizo option too) 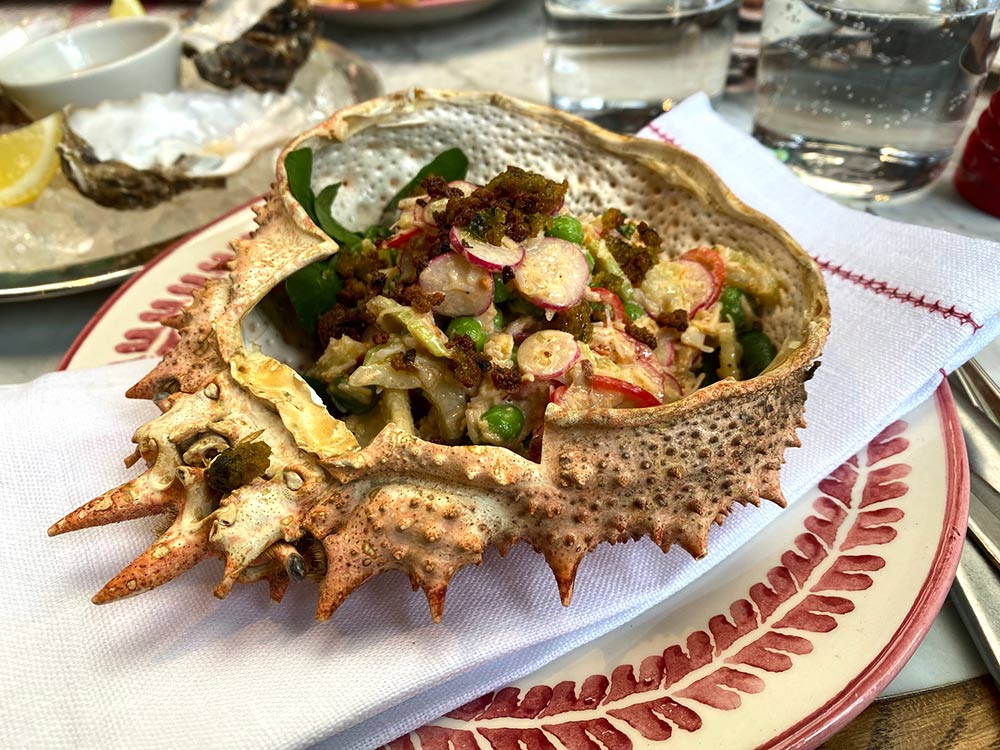 Cornish crab with chilli and lemon, radish, early peas and pangrattato (£17) - it looks great, but it's a somewhat tricky thing to eat from! 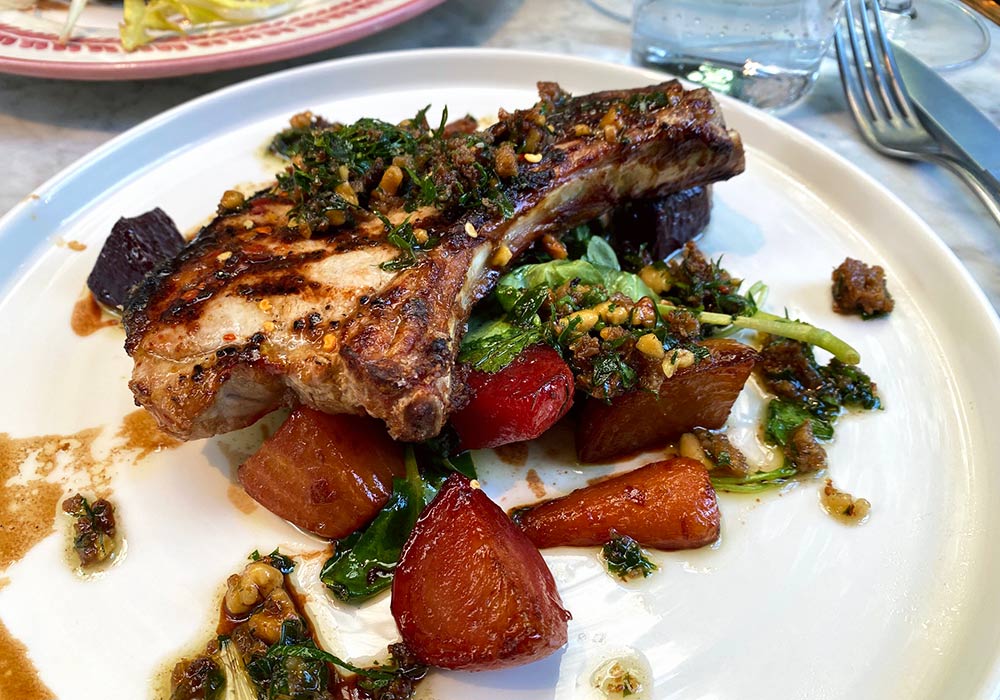 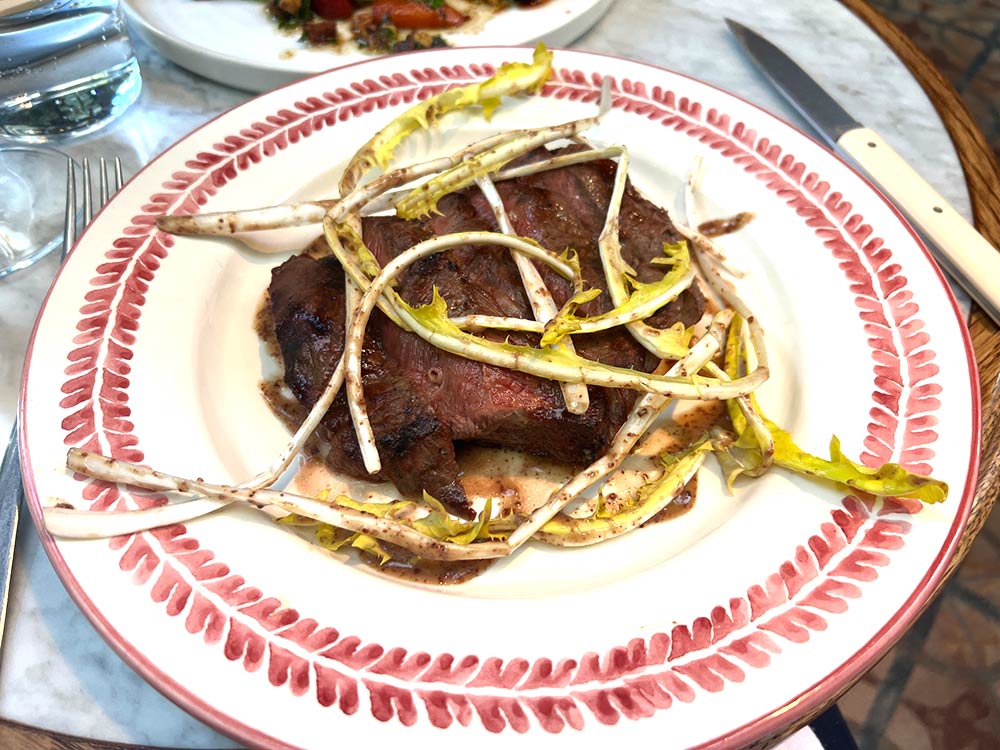 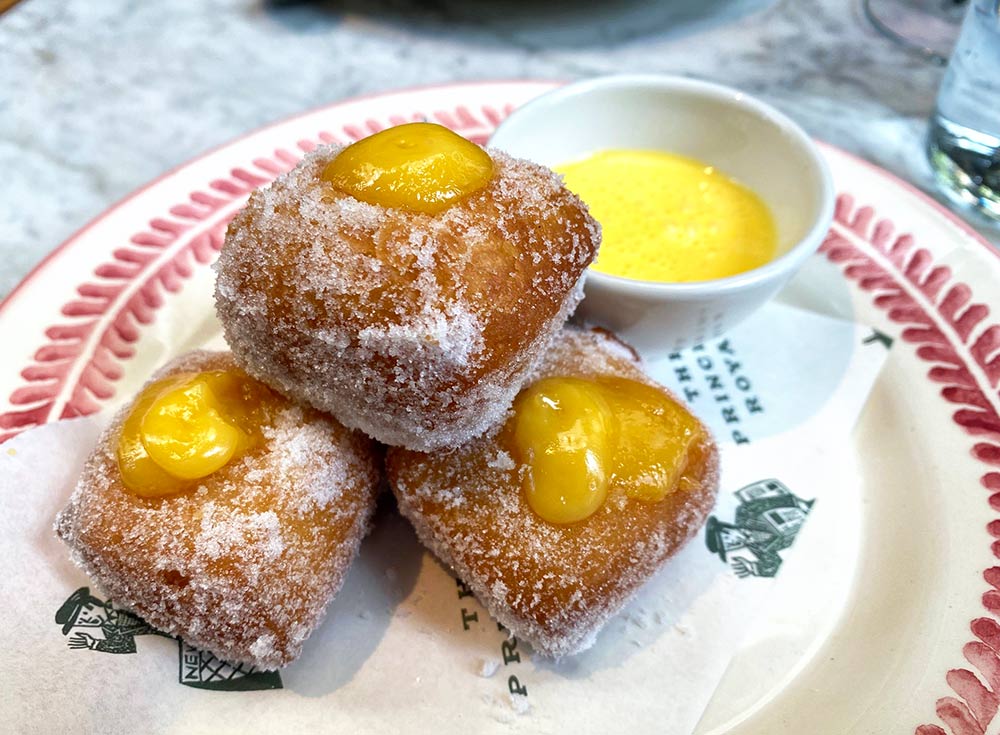 Warm doughnuts with lemon curd and saffron custard (£8.50). If you're sharing a dessert, this is the one to go for, the doughnuts are nice and light and that custard is wonderful. We also appreciate there being an even number here (there's another doughnut lurking underneath). 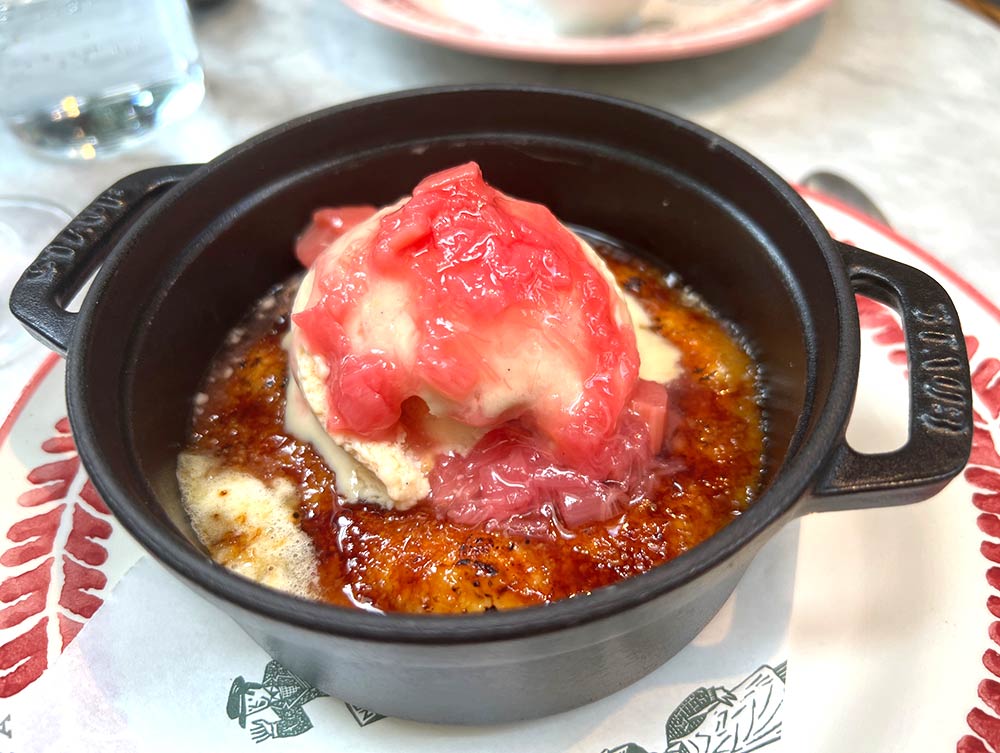 Being a pub, you'd expect the drinks showing to be strong and that's the case here. Alongside the beer (of course) and the wine (wines by the 175ml glass start at a reasonable £6.50) and the cocktails (around the £12-13 mark), it's the Martini shots that immediately caught our eye.

They have three "tini" shots (50ml) including the Vesper Rouge you see below (Edelweiss Alpine, Chocchi Americano and Four Pillars Bloody Shiraz). They're £6 or you can get all three for £18 and they're a good way to settle in here, if you fancy a mini cocktail to start you off. 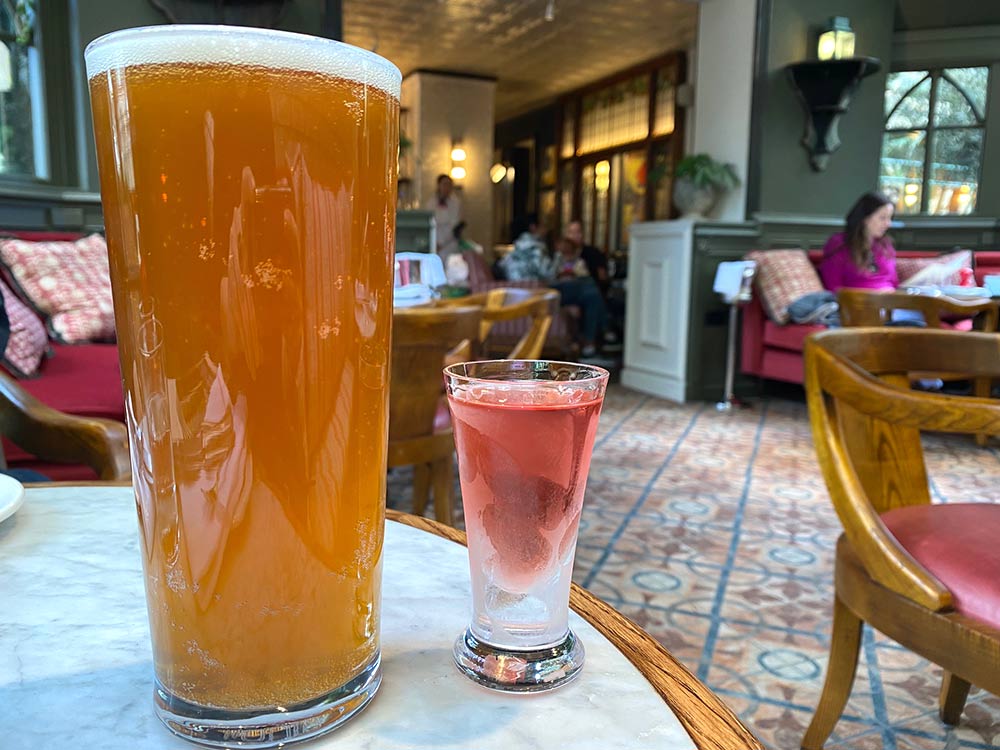 For size comparison - a pint vs the mini Vesper rouge martini.

We can see this pub being extremely popular with locals. Alongside the Ben Tish menu which is full of Mediterranean delights, it's just a very welcoming and good-looking place, and that's even before we get to the huge garden. It's an easy recommendation.

Hot Dinners ate as guests of The Princess Royal. Prices are correct at the time of writing.

More about The Princess Royal