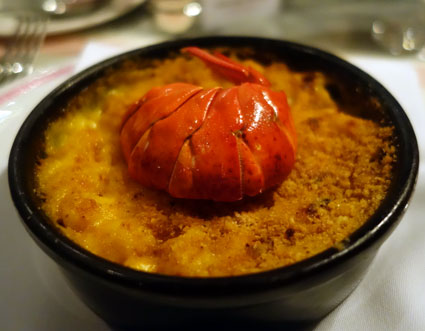 Bob Bob Ricard has long been one of Hot Dinners' favourite restaurants in town, starting with a vodka-fuelled night parts of which we still remember vividly almost five years later. We've also often used the downstairs bar as a really handy mid-Soho pitstop on many a night out (more of that later).

So naturally we were very pleased indeed to be asked down for a return visit to try out their first weekend lunch opening.

If you haven't yet been to Bob Bob Ricard - here's what you need to know.

There's a considerable emphasis on Champagne. Yes this is the restaurant with the infamous "press for Champagne" button. If you head along, it's well worth getting at least one glass (or ideally many) just so you get to use the button (mis-use, or using it for Prosecco is frowned upon). If you do - you'll be treated to something like this, although perhaps not quite this quick:

It's a bit bling, but in a great way. Bob Bob Ricard does ostentatious like no one else. Brass fittings, classy banquettes, lovely staff - it all makes a meal here feel like a special occasion without being overly stuffy.

And that's before you get to the Club Room downstairs. The basement bar has been completely redesigned as a new basement restaurant and it looks absolutely spectacular - kicking off with a sunken dance floor at the entrance. Bob Bob Ricard's owner Leonid has put so much attention into every detail of this room that it matches - and in some ways beats (the entrance really is spectacular) - the atmosphere upstairs. We'll definitely come down here on our next visit. Our photo didn't do it justice, so take a look here.

The menu is probably best described as Russian meets Modern European. So the Russian elements on the menu - like the excellent Petrossian caviar (£29 for 12g which came in tiny pots that we wished we'd taken home) or baked oysters Brezhnev (£12 for 3) - are all marked out if you want to try out some very good examples of Russian cuisine. Or if you get carried away with the whole occasion of Bob Bob Ricard, you might want to go for something a little richer like the lobster macaroni and cheese (£24.75) or the lobster burger and chips (£29.75). You can see all we had in the gallery below and believe us, there wasn't a dud moment in the whole meal.

Desserts are pretty special.  All of these were presented with a little bit of theatre. We particularly loved the do-it-yourself Eton Mess globe (£8.25) and the Earl Grey creme brulée (part of a trio at £7.50).

So, as you can tell, we're fans.  Sure, it's not somewhere to go for a cheap night out - but it is the best restaurant in London if you're looking for somewhere glamorous, sexy and just a little bit naughty. Just one more press of that button...

Bob Bob Ricard will be open for Saturday and Sunday lunch from this weekend. Find out more about Bob Bob Ricard.

Hot Dinners were invited to try the weekend lunch at Bob Bob Ricard. All prices were correct at the time of writing.