Written by Catherine Hanly
Created: 26 May 2015 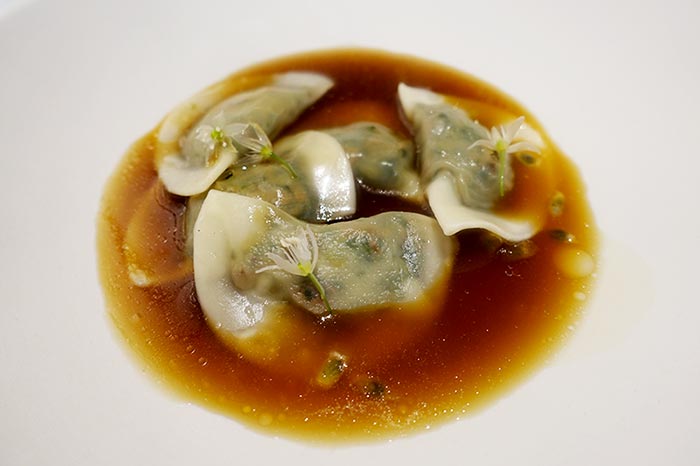 So what can you tell us about Le Chabanais

It's from the same team behind Le Chateaubriand in Paris - a restaurant that's currently No 27 on the World's 50 Best Restaurants list and which is one of the leading members of the Parisian bistronomy movement. Think restaurant haute cuisine at bistro prices (and style). They've brought their head chef Paul to head up the kitchen.

On Mount Street, half way between The Connaught and the Porsche showroom in a couldn't-be-more-Mayfair setting if it tried.

If your budget allows, a martini in The Connaught bar would be a pretty good place to start, but Le Chabanais is also home to a clubby bar downstairs where we had an astonishingly good couple of cocktails - the Madame K (lillet blanc infused with red chinchona and topped up with champagne) was notably good. The bar's open until 12.30 - so worth adding to your great central London bars list.

The long dining room (clad entirely in brass which looks quite beautiful as evening descends) has a bright semi private dining room at the rear, a bank of tables for 2/4 along the left wall as well as a central row and a range of seats up at the bar, but arranged so you can sit opposite each other - a bit like we've seen at Bo Drake (and Aldo Sohm in New York). We liked the view from our table at the back, looking out over the room, but the seating is a bit cramped - maybe you have to be Mayfair-thin to be properly comfortable.

We were dining off a truncated soft opening menu, so we can't be sure how the full menu will work. Of the dishes we tried, the ones that stood out were:

There's also a secreto tartare on the starters list, which wasn't our cup of tea - but a lot of people whose opinions we respect really seem to have liked this so maybe you should try this too.

Our drinks list was similarly short for the preview - with just four wines on it. But the one that stood out was the Pernand Vergelesses chardonnay which was rich and floral.

We haven't been to Le Chateaubriand, but if you have you'll apparently be suprised at the difference between the two restaurants in terms of style - this is a serious Mayfair restaurant with the level of opulence you'd expect in direct contrast to the original bistro. It's definitely somewhere you're going to want an opinion on.