One of the best value wine pairing dinners in London? 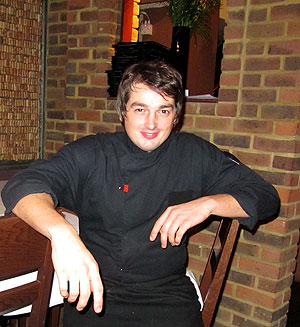 Hot Dinners was recently invited to try out Dinner with Jordi – one of a new series of private dinners with wine-pairing at Vivat Bacchus in Farringdon. The Jordi in question is the Barcelona-born head-chef, Jordi Vila, whose training includes stints at L'Atelier de Joel Robuchon and El Bulli.

Held once or twice a month, these dinners are fast-becoming hard to book and maybe that’s because they’re so keenly priced. In fact, we’re not sure how owner Gerrie Knoetze manages to turn a profit at all. The five-course dinner with wine pairing comes in at a seriously bargainous £39 a head, which considering the excellent food and wine we enjoyed that night, has to be one of the great bargains in London at the moment.

The dinners are held in the cosy basement restaurant, in a private section and each meal begins with an introduction from Gerrie and Jordi on the inspiration behind each course and the wines chosen for it. Our menu for the evening was as follows: 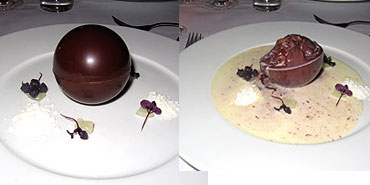 The Hot Dinners team sampled every course on offer by cunningly ordering both and then swapping half-way through. Standout dishes included the golden duck egg which had been cooked slowly sous-vide and then deep-fried and the seared venison which was perfectly done and went beautifully with the soft, fruity South African Veenwouden. But the standout course for everyone at the dinner had to be the marvellously batty looking dessert, where a large shiny chocolate ball, resembling nothing so much as a cocoa Death Star was melted into oblivion by the addition of a hot white chocolate sauce. Sheer food theatre and a good example of Jordi’s fun approach to cooking.

The next Dinner with Jordi takes place on 9 and 23rd March 2010. For reservations go to Vivat Bacchus.