Odette’s: A Labour of Love in Primrose Hill 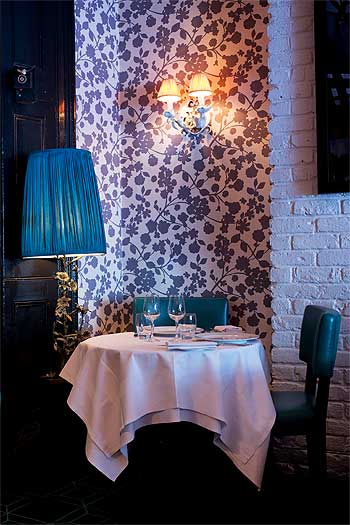 Movers and shakers in Primrose Hill may recall the past few years of Odette’s, the bar and restaurant set snugly amongst a row of Victorian houses, with mixed feelings.

Its chequered past has involved a history stretching back to 1978, and most recently was under the leadership of Mark Powers (allegedly an uninspiring era).

Now under the ownership of Welsh prodigy and Great British Menu star Bryn Williams, Odette’s has slimmed its prices, turned the focus to a strong game-led lineup, and slowly built up its reputation again as one of North London’s leading culinary lights. We popped in for a lunch to check out how this neighbourhood restaurant, now in its second year of Williams’ ownership, was faring on the hill.

Hailing proudly from Denbigh in North Wales, Bryn’s style seems to be finding new vocabulary in this intimate North London space. Drawing on experience with Michael Roux at Le Gavroche and other glittering spots including Galvin at Windows, his lunch menu offers light versions of classic dishes.

The first draw is the prices. At £16 for two courses and £22 for three, it’s a serious steal. This is not your Slug and Lettuce meal deal. Each course offered generous, meaty portions with inventive taste pairings well executed.

We warmed up from the cold Camden air with a creamy smoked eel risotto, bountiful enough to pass as a main, while a crispy polenta flew the flag for the veggies. Odette’s is one of the only restaurants in town to offer a thoughtfully-chosen, complete vegetarian tasting menu, and this beautifully cooked dish offered a light alternative to pasta.

Primarily known for its game, which the father of owner Bryn Williams shoots himself in his Welsh home town, Odette’s aim is to be known as a solid neighbourhood restaurant, but an ambitious menu takes the restaurant beyond the confines of the hill. With special nights coming up including wine pairing dinners, Odette’s capitalises on its premium real estate, but is also beginning to lure diners from other parts of town.

The outdoor seating and walled garden were buried under a blanket of snow when we visited, but come the summer expect all eyes to fall on Primrose Hill as an emerging talent continues to blossom.

Read our Q&A with Bryn Williams for more.