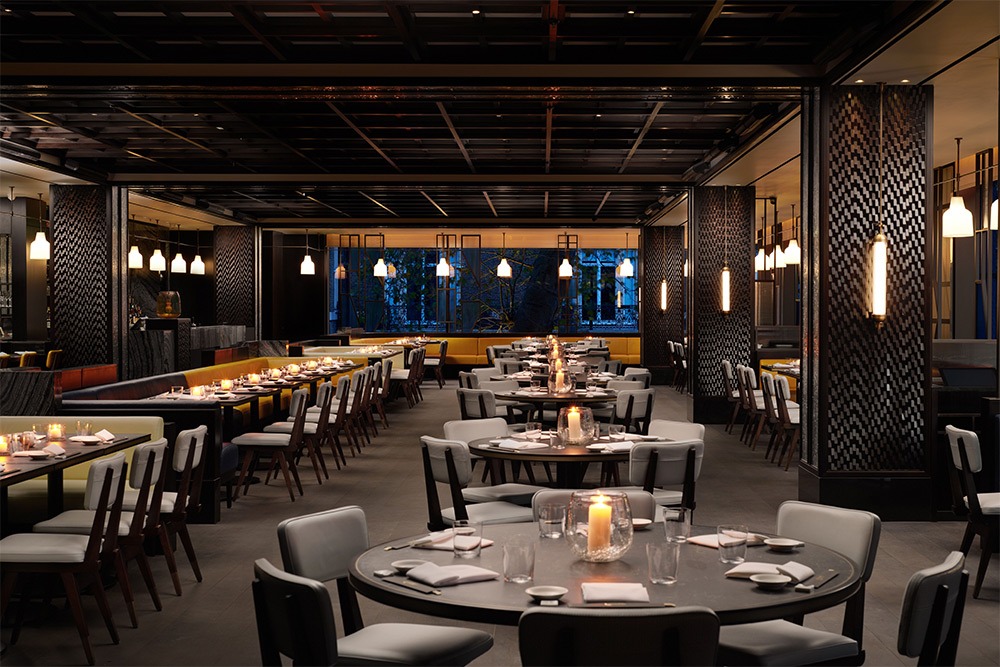 A look at the new Nobu restaurant - note that the dining room continues back behind where the camera is positioned. It is BIG.

What can you tell us about Nobu Portman Square?

The fourth Nobu to open in London is also the third - mainly as this is something of a replacement for celeb hotspot Nobu Berkeley Street. That closed earlier this year, but a large amount of the staff have moved over to this new swankier space in Marylebone that's also the second Nobu hotel in London. So it's had more of a convoluted route to opening than usual.

What if I've never been to a Nobu?

If you are somehow unfamiliar with Nobu - here's the catch-up. The high-end Japanese restaurant is probably best known for being a co-venture between Robert De Niro and Nobu Matsuhisa which originally started in New York in 1994. Since then, it's become something of a global juggernaut and the restaurant that this replaces, Nobu Berkeley Street, had a real reputation as a celebrity haunt and often had paparazzi outside. Will the celebs make the migration to Marylebone - that's something that will probably come post-pandemic.

Portman Square is about a five-minute walk from Marble Arch and Oxford Street. it's an area that has seen its fair share of high-end openings, the most recent being Kol which is just around the corner. 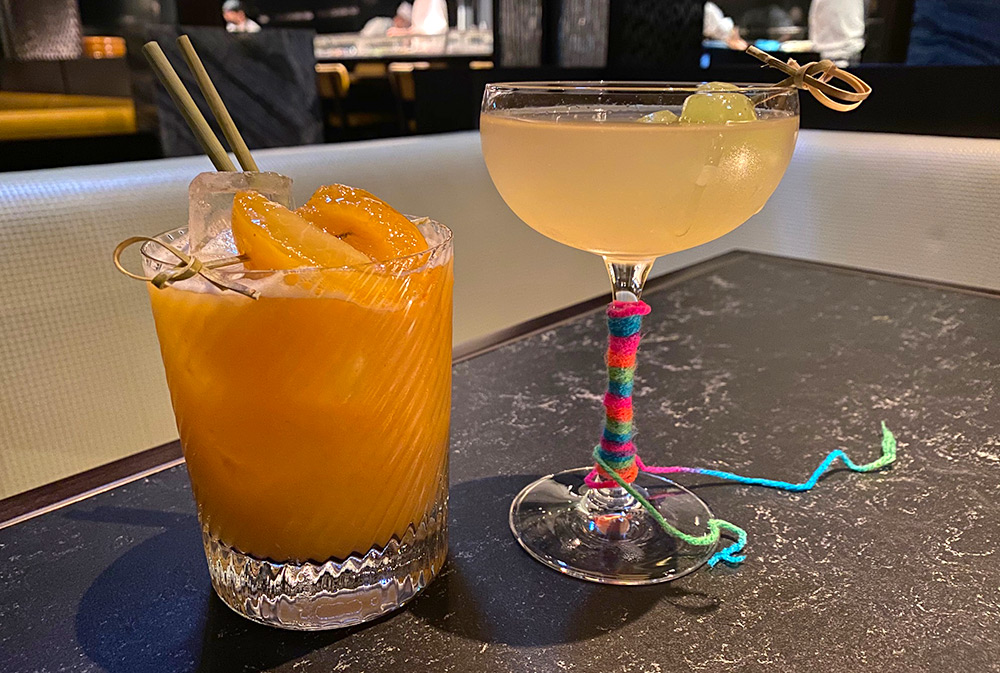 And there's much more to this than the restaurant?

Yes indeed. Normally we'd take the chance to really check out the new hotel but COVID restrictions at the time of writing have made that somewhat harder to do.

For instance, there's a beautiful new bar downstairs - but as you had to eat with every drink, it's not somewhere where you can grab a drink before your meal (in Tier 2 anyway). But when restrictions eventually ease, both this bar and the one at Kol means that the area is blessed with two very promising new bars - particularly judging by the cocktails we had with our meal (above).

What about the restaurant itself?

First off, it is huge, taking up what appears to be the entire width of the hotel. Based on the first floor, it also has wraparound windows which will offer a distinctly different, more open, vibe than the Berkeley Street restaurant (and indeed the Shoreditch one). It also means that the A-listers will be able to grab a window seat without being gawped at (alas, no-one famous was there on our visit).

Covid spacing seems good - but it was never going to be the kind of restaurant with tables crammed in. Ultimately, it's a beautiful looking room - making good use of the space while also retaining that Nobu vibe.

Tell us about the menu...

Much like the room, the menu is big. There are dozens of dishes to get through - mainly split into classic and "now" dishes if you're on the lookout for something newer. Yes, the famous and much imitated black cod miso is on the menu, but we opted to try quife a few dishes that we hadn't had before.

It's Nobu, so obviously the prices reflect that - while they certainly don't stint on the quality of ingredients, you're also paying for the whole "scene". Here's what we tried on the night: 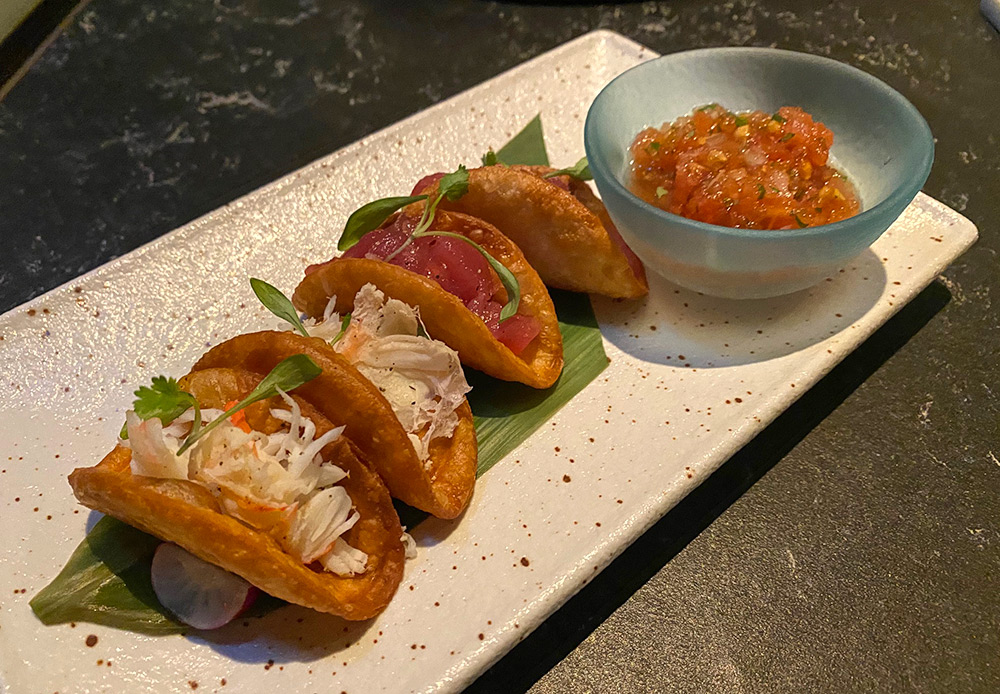 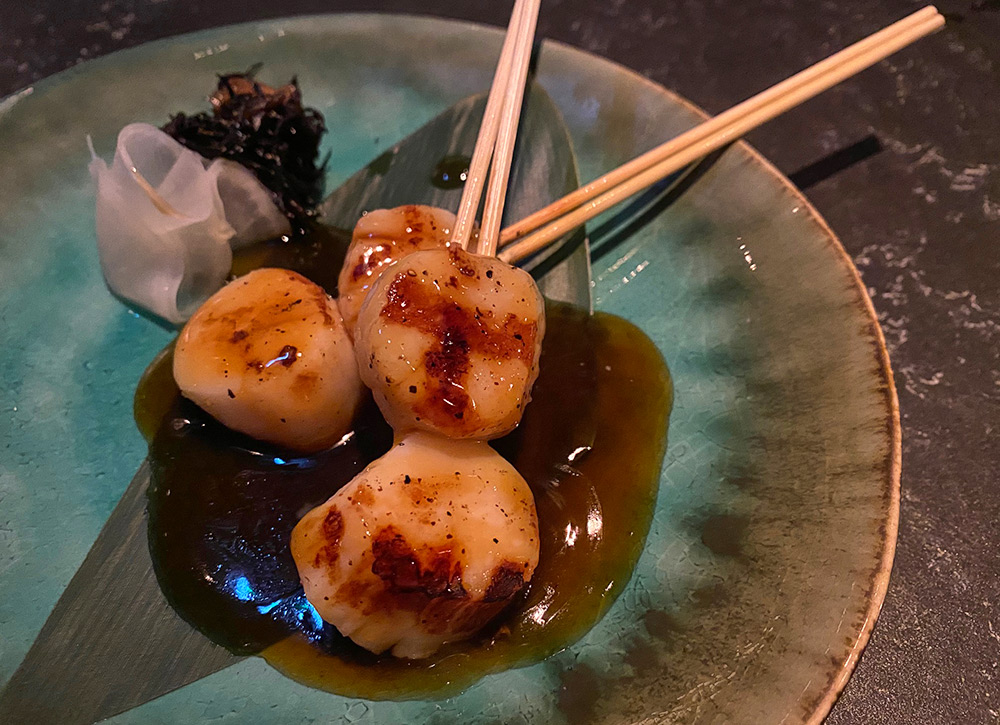 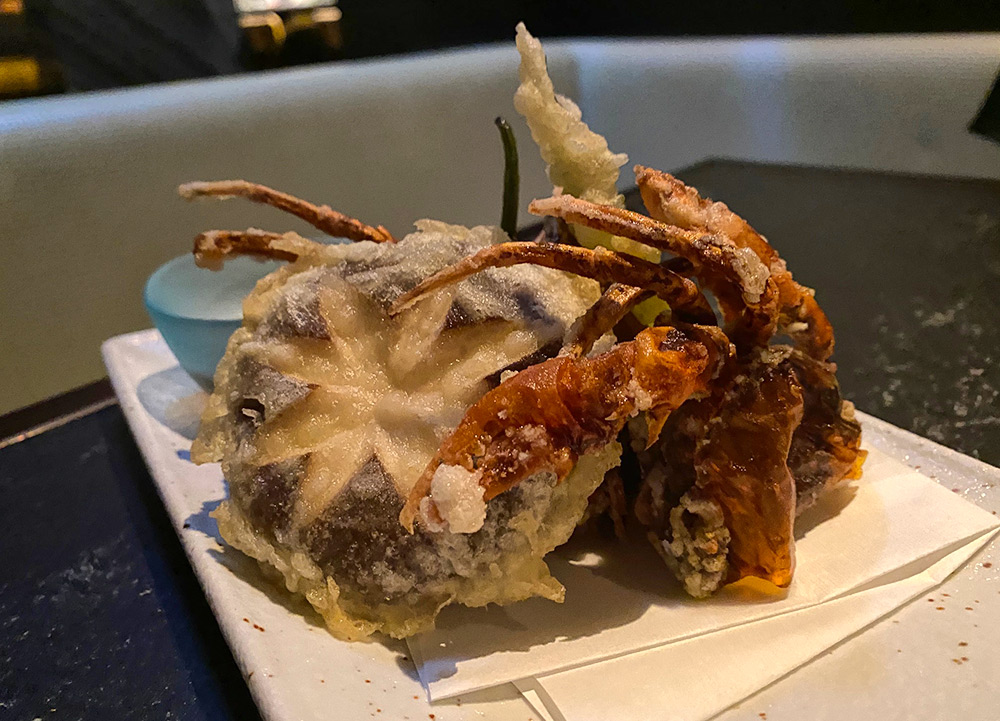 Soft Shell Crab Kara-age with Ponzu (£14). A little more tempura-like than kara-age for us, but no bad thing. 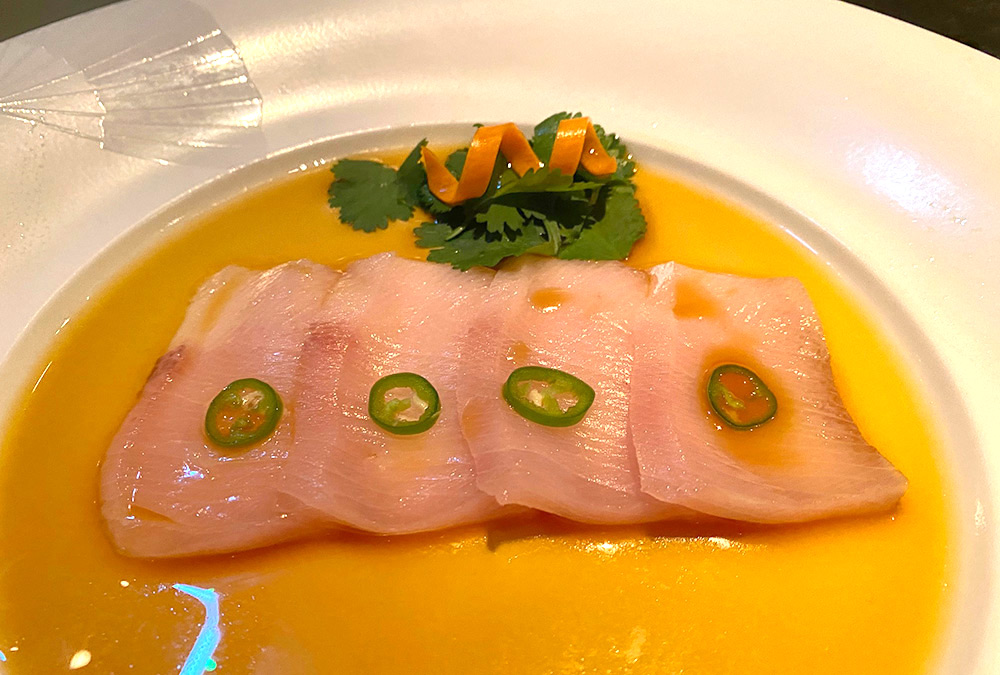 Yellowtail Jalapeño (£21) - this is a Nobu classic (and one of their most popular dishes). Wrap the tuna into rolls with the jalapeno and coriander on the inside. 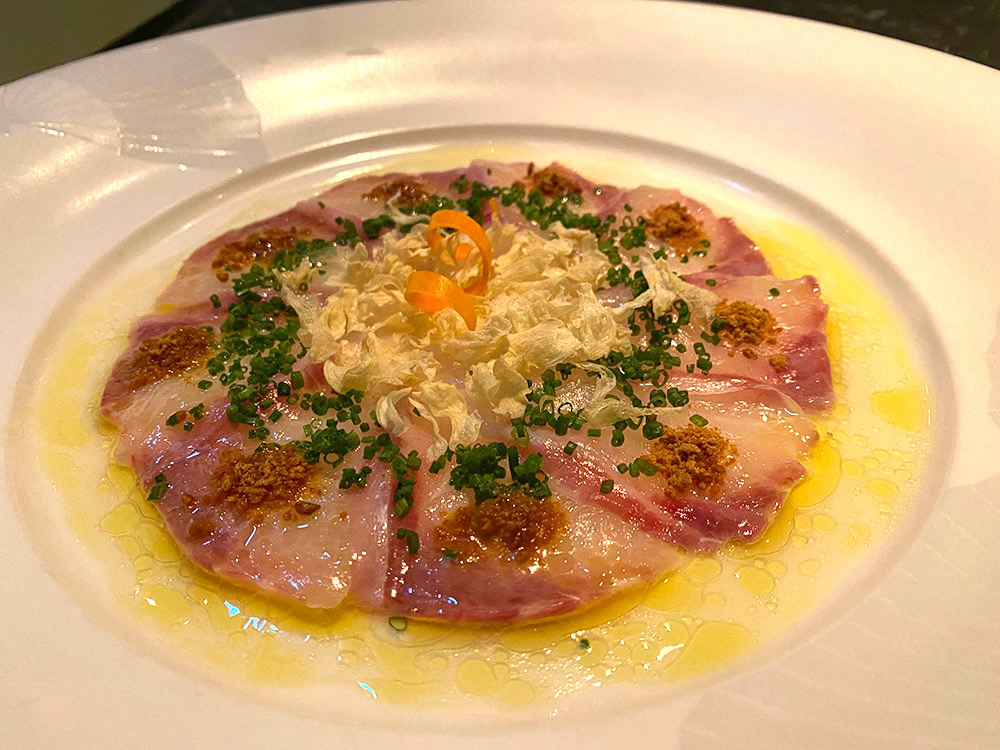 Whitefish Sashimi Dry Miso (£18.50) - one of their newer dishes and one of our favourite from the night. 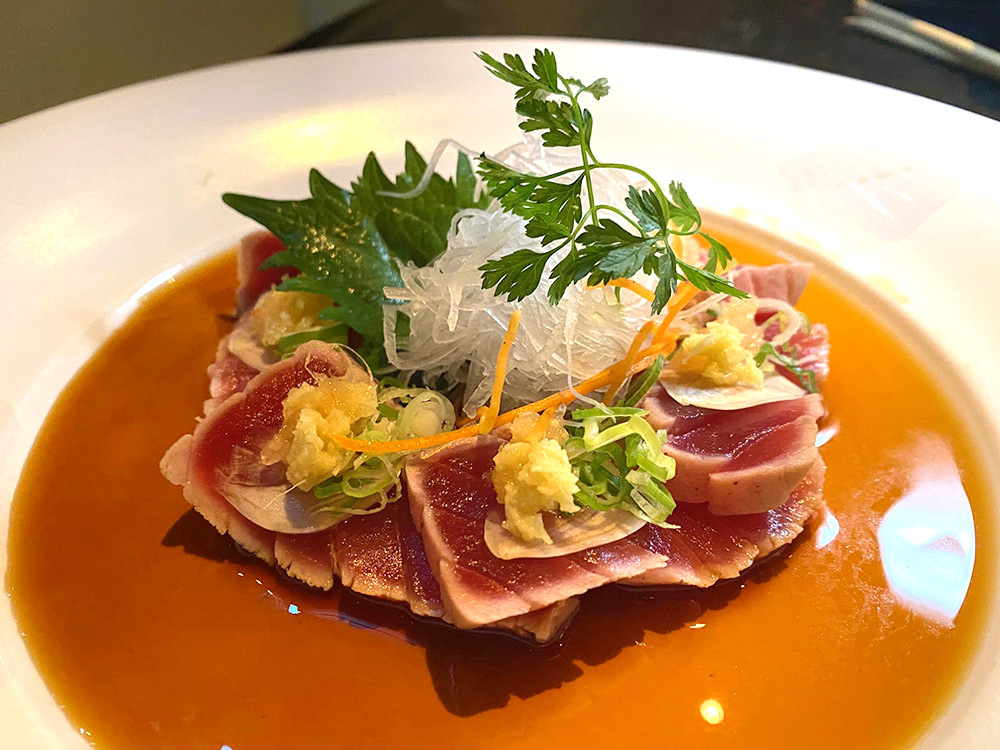 Tuna Tataki with Tosazu (£18.50) - another Nobu classic. And when times are this uncertain this is what you need. 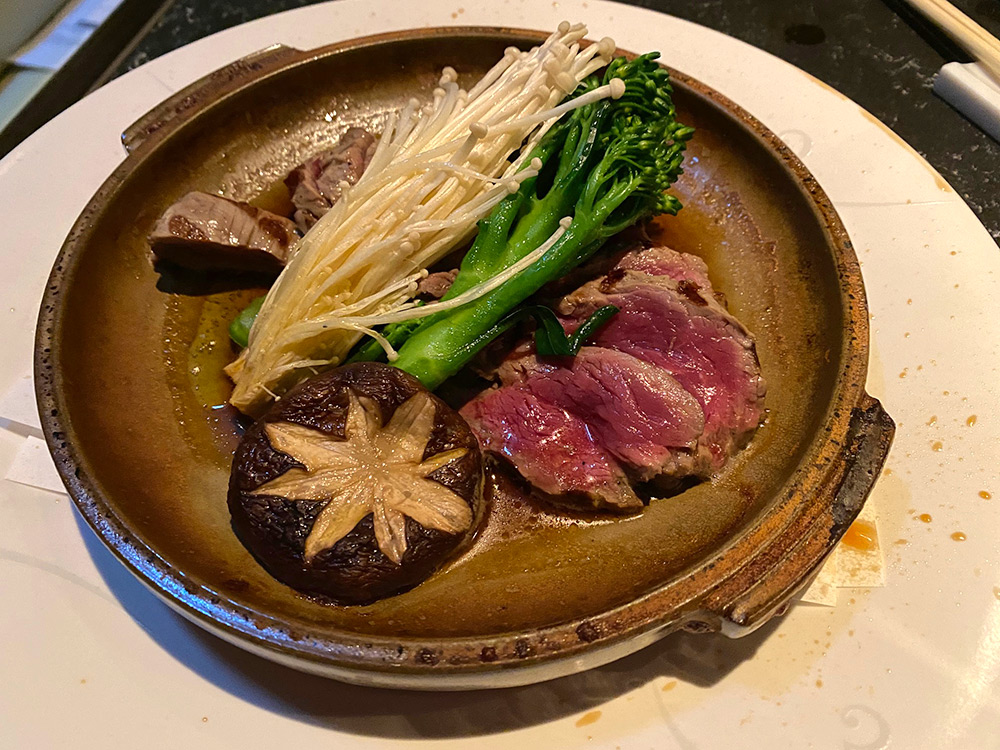 Beef Toban Yaki (£23) - a sizzling dish glazed with yuzu soy sauce and clarified butter, served with shitake and enoki mushrooms along with tenderstem broccoli and asparagus.

There's also an extensive sushi and sashimi menu - with the sushi chefs working pride of place at the prominent sushi counter. When restriction ease - grabbing a perch at that counter definitely looks like a good choice.

Looking back on the above - we see we didn't do vegetables on the night and, being honest - seafood is a strong focus for Nobu. But that doesn't mean there isn't a good choice of dishes suitable for vegetarians or vegans, from "Baby Spinach Salad Dry Miso", "Vegetable Hand Roll with Sesame Sauce" as well as an entire vegetable section of the menu with dishes like "Courgette Tataki Ponzu", "Cauliflower Jalapeno", "Mushroom Toban Yaki" and from the wood oven, "Cabbage Steak with Truffle".

Thankfully, the dessert menu is a little shorter than the rest of the menu, so making the following choice was easy: 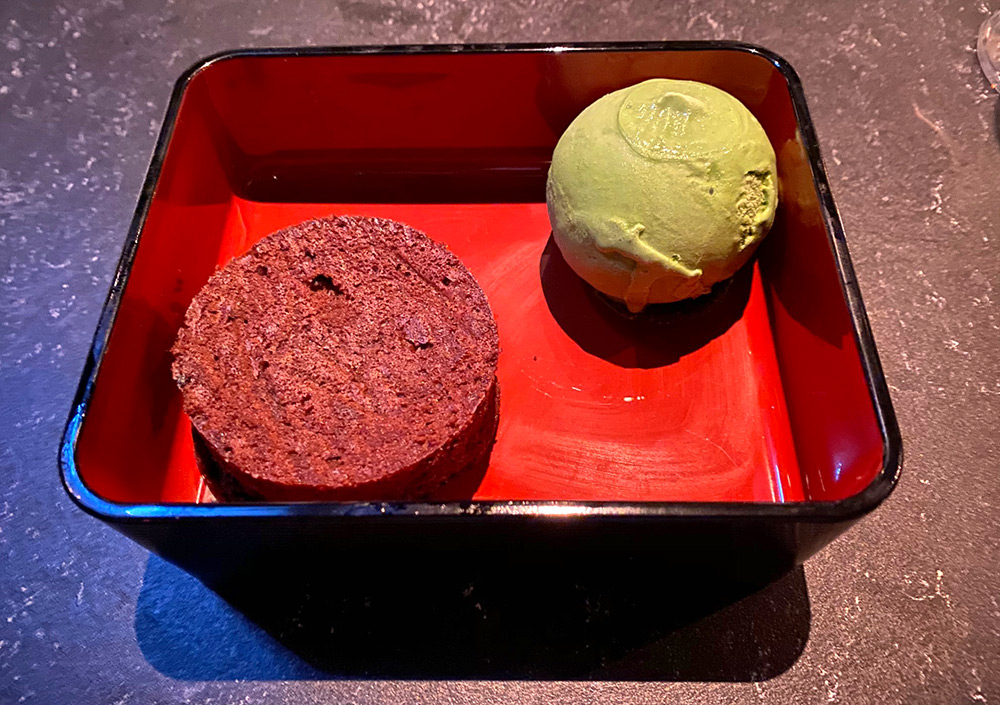 Chocolate Bento Box (£12) - a chocolate fondant paired with matcha ice cream. And that box really does stop it getting all messy when you break into the fondant. 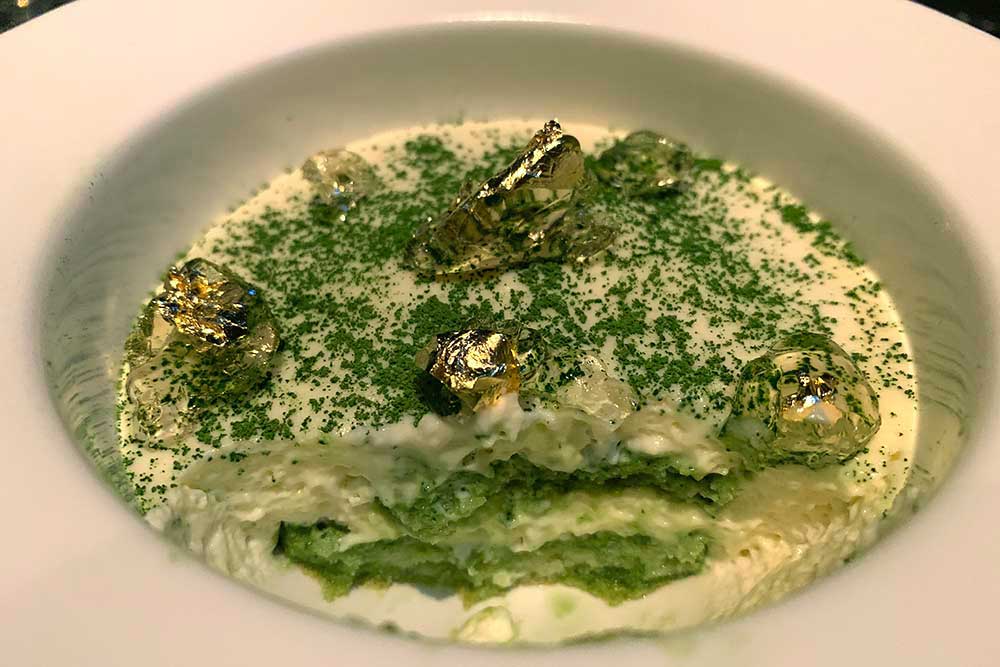 As shown above, the cocktails are excellent (all around £15-£17 which is pretty standard for high-end bars) and there's a strong sake menu too. Wine takes in global varieties, sneaking in a few natural and organic wines along the way, with prices starting around £33 - but rises pretty quickly from there, heading upwards to £1150 for a Bienvenue Batard Montrachet Domaine Leflaive 1998 burgundy.

It's a difficult time to open a hotel - but as a restaurant Nobu seems to already be doing great business, gradually building up to a full room on a Tier 2 London early weekday night. The Nobu experience isn't for everyone - but they just do it so well.

The food is excellent, the staff from Berkeley Street area already old hands (our waiter had been with the company for more than 20 years) and there's a palpable buzzy scene there. Its location also seems much better suited for them than the Shoreditch hotel - it all just feels much swankier. If you're up for splashing out but want to go somewhere that you just know what you're going to get, this new opening shows that they've still got it.

Where is it? 22 Portman Square, Marylebone, London W1H 7BG