[SIGPLUS_EXCEPTION_SOURCE] Image source is expected to be a full URL or a path relative to the image base folder specified in the back-end but /blog/2014/badegg-test/gallery is neither a URL nor a relative path to an existing file or folder.
0
Shares 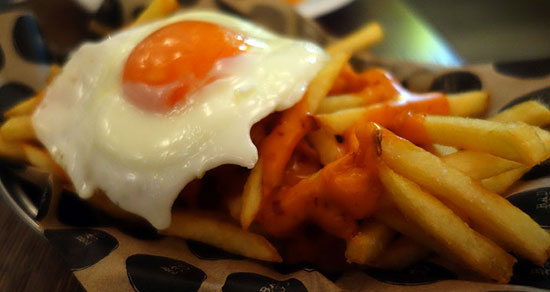 What can you tell us about Bad Egg?

It's the very popular Neil Rankin's first fully new restaurant since launching Smokehouse in Islington. Despite being right in the middle of the City, it's very much a down and dirty affair which has one particular focus. It's (more or less) all about eggs, a variety of which appear throughout the menu.

We popped down on the very first preview night to get an early look at what's in store.

It's at the bottom of the Citypoint building, a few steps from Moorgate (take the west exit out of the Moorgate station maze as that's closer to the restaurant).

We've always struggled to find something decent to eat and drink in the immediate area around Moorgate - so nearby workers will be glad for Bad Egg. If you're up for a short walk, then the bar at City Social is definitely the best nearby option and the Jugged Hare is a short walk away too as is the South Place hotel for a rooftop drink.

There's also a small bar at Bad Egg itself where you can wait with a drink while you're waiting for your table (we'd really recommend an Argy Bhaji - more of that later).

It is, but they'll take your details and will text you when a table is ready. Very handy if you work nearby. They may take weekend bookings later in January.

And is all the food egg-based?

Not all, by any means, but a large chunk of the menu has egg in some form or another, particularly the hash and the baked egg dishes. So there's is definitely an option to go very protein heavy on the dishes if you want, particularly in the baked egg dish (although note that the goats curd and harissa dish (£10) which we had is very much on the spicy side).

But if you're not worried about carbs then hit the sides where the n'juda and fried egg fries (£5) are an absolute must - this sees the n'duja mixed with melted cheese to produce the ultimate dirty chips. We'd happily go back just for those although the slightly more healthy shiitake and kale, with the kale rubbed with chili (£4) was also excellent. The sides menu is actually quite extensive in itself - with wings, slaw and salad available too.

Outside of those two sections there are burgers - from plain through pulled pork (£11) and the Bad Egg (which has more of that n'duja cheese plus egg yolk, pickles and French's at £11), some excellent tacos (the chicken fried fish at £7 beat any tacos we've had in the States recently) and fried ribs (from £8) too.

What you won't see on the list is dessert - they're concentrating on the rest of the menu. We could quite happily have had some ice cream, so why doesn't someone round here open a dessert bar...

The cocktails, from £8.50 are excellent. The Argy Bhaji - fresh peach, curry powder and Kamm and Sons - is a fantastic creation (the curry powder works wonders) and was our favourite from the list. There are plenty of craft beers, led by Beavertown starting at £4.35 and wine ranges from £3.25 to £5.95 a glass (although note that they are only 125 ml glasses - you can also order 175ml measures, which they will do but don't show on the drinks list).

The area was crying out for a decent restaurant that avoided the high-end and we think Bad Egg fits the space very well. It's likely to be a godsend to anyone working in the area and should even make Moorgate worth travelling to at weekends when the Bad Egg brunch is launched in mid January. Another winner from Neil Rankin, then.

Hot Dinners were invited to Bad Egg on a preview night. Prices were correct at the time of writing.