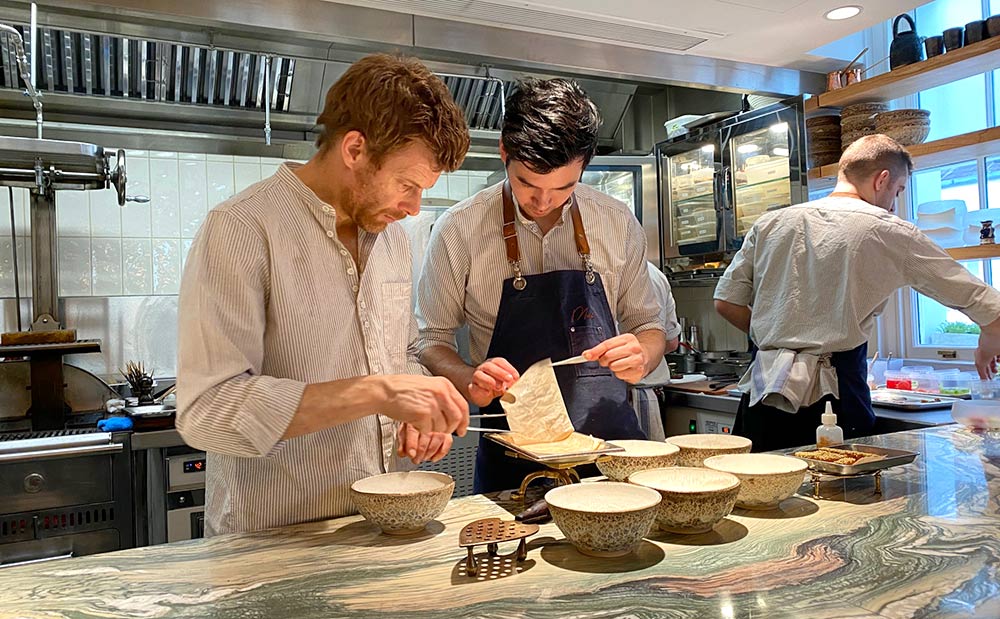 Aikens at the pass, with head chef Seamus Sam. Yes, there's plenty of tweezer-action, but it's justified.

What can you tell us about Muse?

It's the new restaurant from Tom Aikens - his first proper fine dining place since closing his eponymous Tom Aikens restaurant (where Elystan Street is now).

Aikens himself is a somewhat controversial figure. He's certainly a hugely talented chef, but his business reputation took quite a dent when he wrapped up his last company, leaving quite a few folk out of pocket.

That said, Aikens has picked this spot to move on from the past - this is a much more intimate setting, although the location is top drawer.

It's in the heart of Belgravia, in a small side street off Grosvenor Place. If you're heading here by public transport, the nearest tube is Hyde Park Corner. 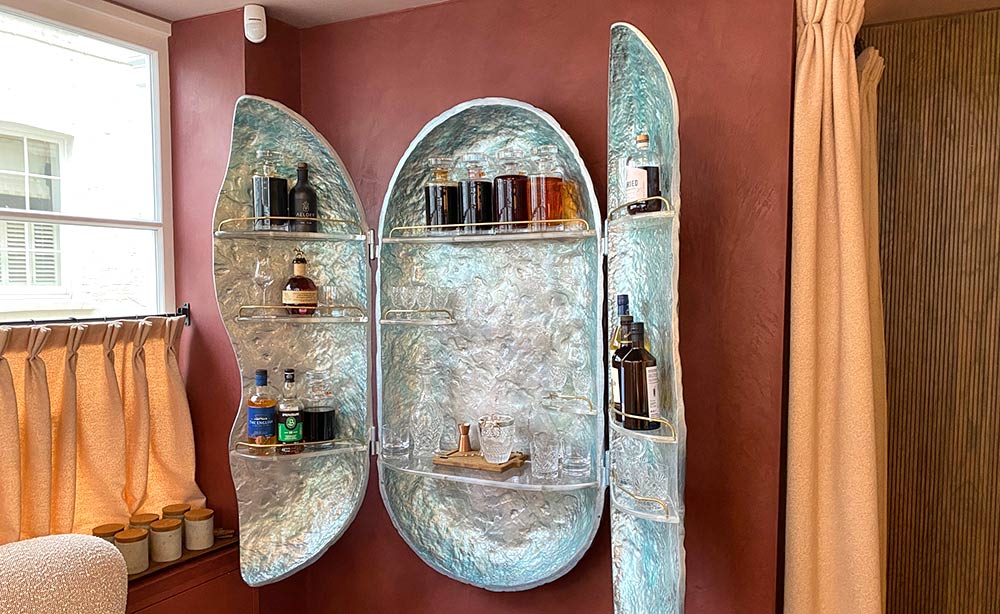 We'd like this drinks cabinet in our living room, please.

So what's the set-up here?

The basic idea behind Muse is that it's a more personal restaurant for Aikens, with dishes that are built around his own experiences. At first glance, particularly with the lengthy menu descriptions, that does come across as more than a bit twee. But once you're in the restaurant that storyline aspect isn't as much to the fore as we thought it might be,

Hang on - wasn't this the restaurant that The Mail put the boot into?

It was indeed. In bringing Jan Moir out of restaurant reviewer retirement, The Mail really went for the jugular. But, from our perspective, the restaurant, service and food that we experienced was so far removed from Moir's experience as to bear no resemblance. Muse has also since garnered very positive reviews since - including five stars from The Evening Standard.

Leaving the "story" aspect aside, the restaurant is best described as serving a fine-dining tasting menu in an intimate, comfortable setting.

A quick note on that last point - it really is very comfortable. Comfort is something that, more often than you'd think, gets overlooked in restaurant design. But everything here from the seats in the bar downstairs to the low-level (i.e. chair-height) padded stools in front of the kitchen counter felt perfect. The designer Rebecca Korner was also eating there when we visited and we discovered that Muse was her first restaurant project.

And in which of those comfy seats should we sit?

The best experience, to our minds, is on the counter (six seats upstairs by the main kitchen, a further five downstairs by the pastry kitchen). If that's really not your thing - then there are two four-seater booths and two tables for two in the upstairs dining room too. The room is small enough that you'll still be able to see plenty of the delicate work going on in the open kitchen.

On to the food then. What can we expect?

There's a three (£50, lunch only), six (£95) or 10 (£145) course tasting menu available. That six-course is the sweet spot - enough to get into the vibe of the restaurant, but not too much that it carries on too long. As mentioned, it's a fine dining affair. So there are a few canapes before things kick off: 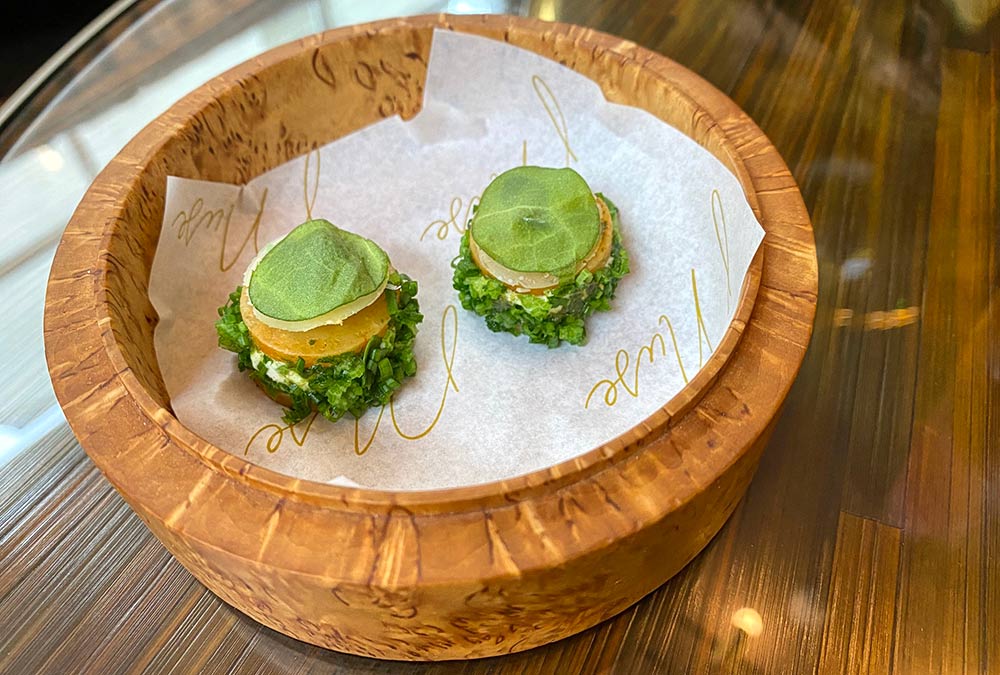 Served before the meal - this is their take on "cheese and biscuits". So pretty.

If you've had your canapes in the bar - then it's time to head upstairs for the main event.

Assuming you're at the counter, all this will be created in front of you and it's easy to be slightly hypnotised by the effort that goes into creating the dishes. There was a little concern in advance that it would all be done in hushed tones, but it's a very convivial affair and not at all forced. That wordy menu isn't really focused on - except for one pop-up book moment - so the slightly florid dish descriptions don't really come into play during the meal itself (this may well be a case of the restaurant finding its feet with regards to what does/doesn't work).

That said, clever plating only works when matched with great food - and luckily everything holds together very well. Here's a selection of what we had during our lunch: 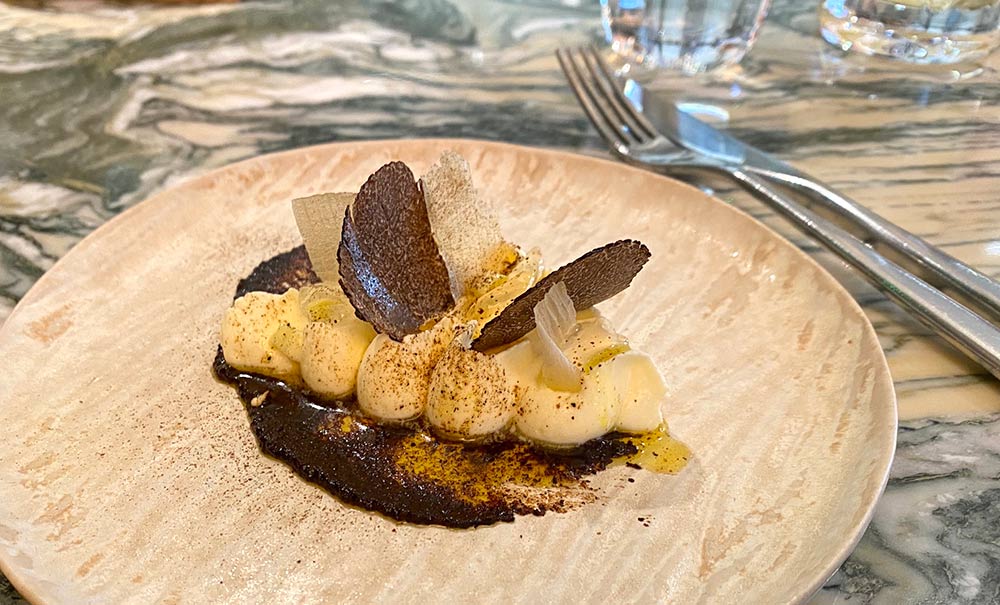 Just down the road (milk, honey, truffle) - using sheeps milk ricotta sourced from a farm down the road from Aikens' childhood home. 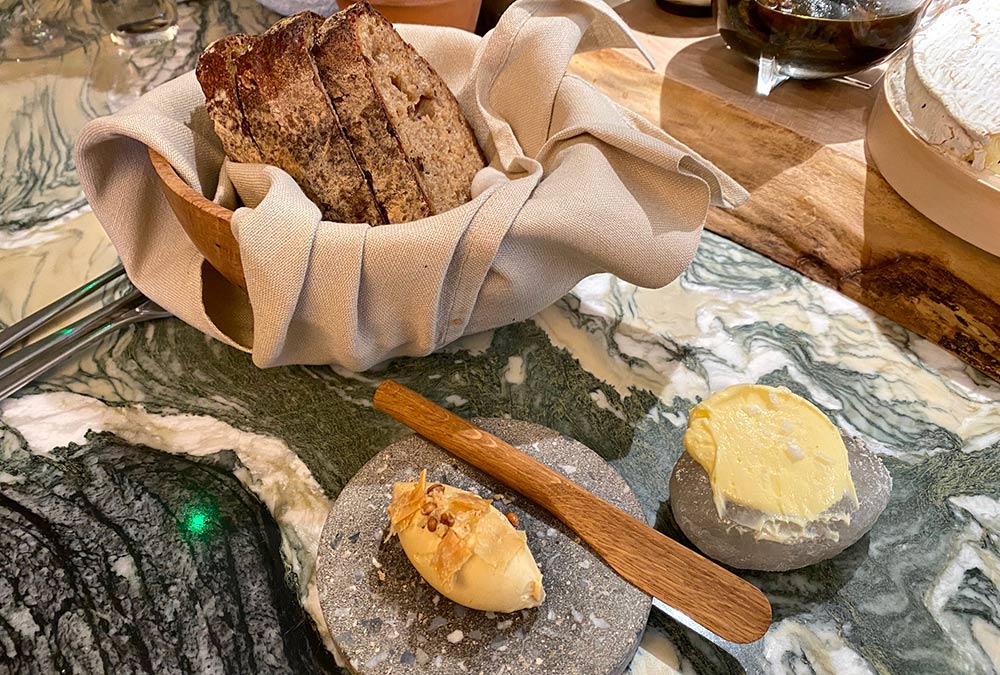 The bread course - sourdough served steaming from the oven and that's chicken butter (topped with crispy chicken skin) on the left. 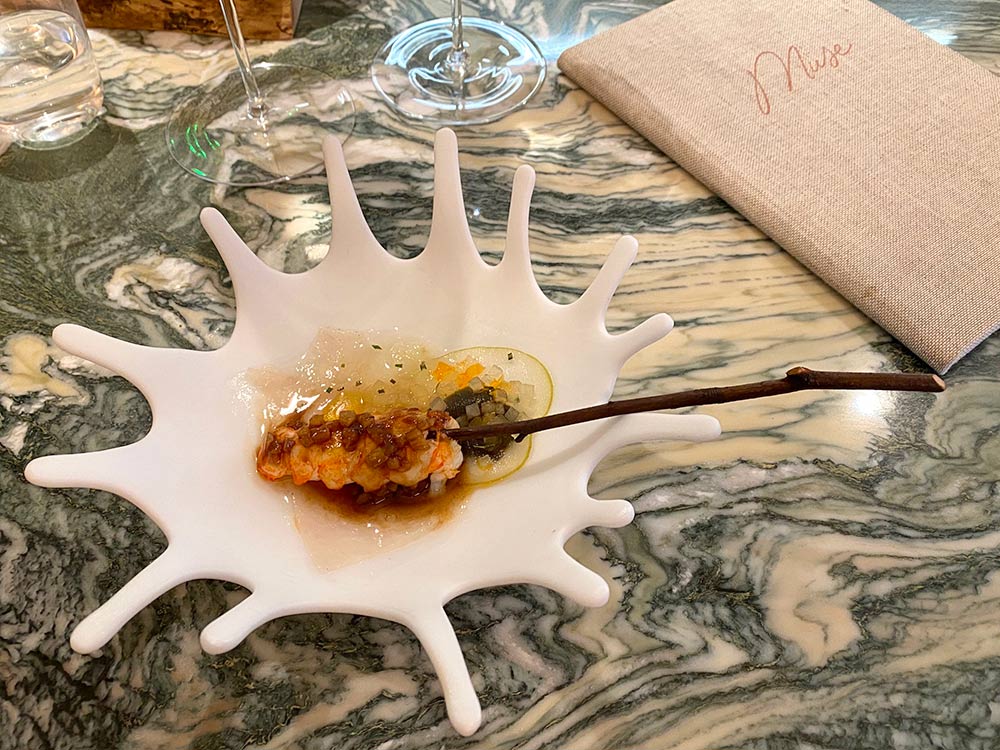 "Conquering the Beech Tree" - (langoustine, pork fat, burnt apple) - a perfect little langoustine lollipop that you wrap in the thinest shroud of lardo. 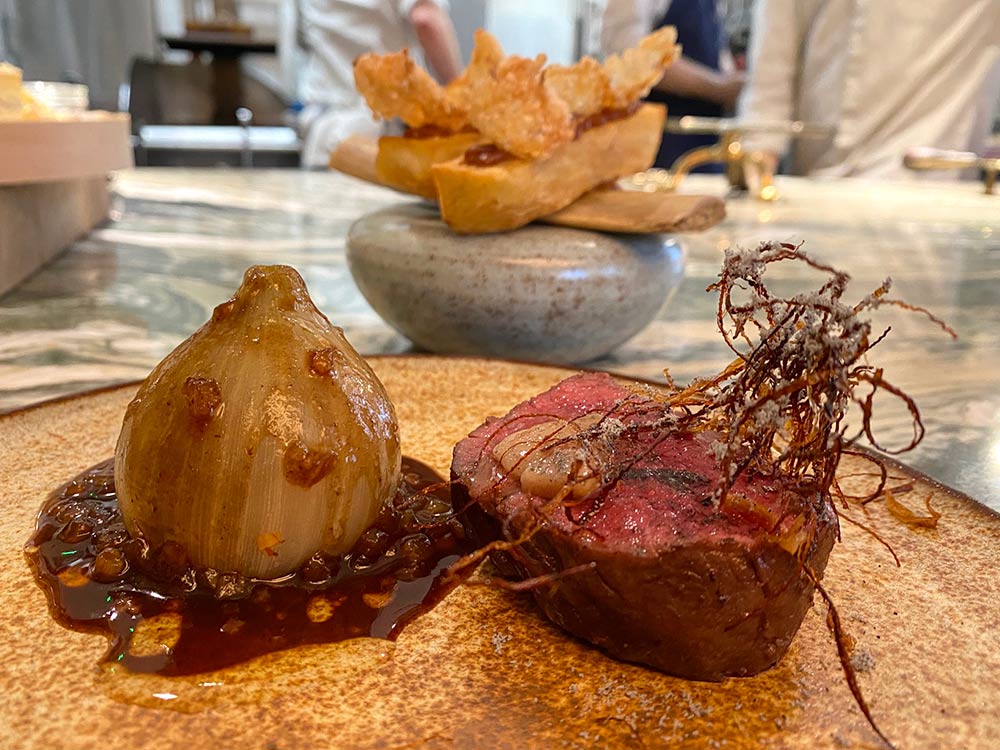 If there's space, you might be asked if you want to move downstairs to a seat in front of the pastry kitchen for dessert. If this option comes, then absolutely take it as it's a great chance to see some of the artistry down there, all watched over by pastry head chef Charlie Luke Watson. 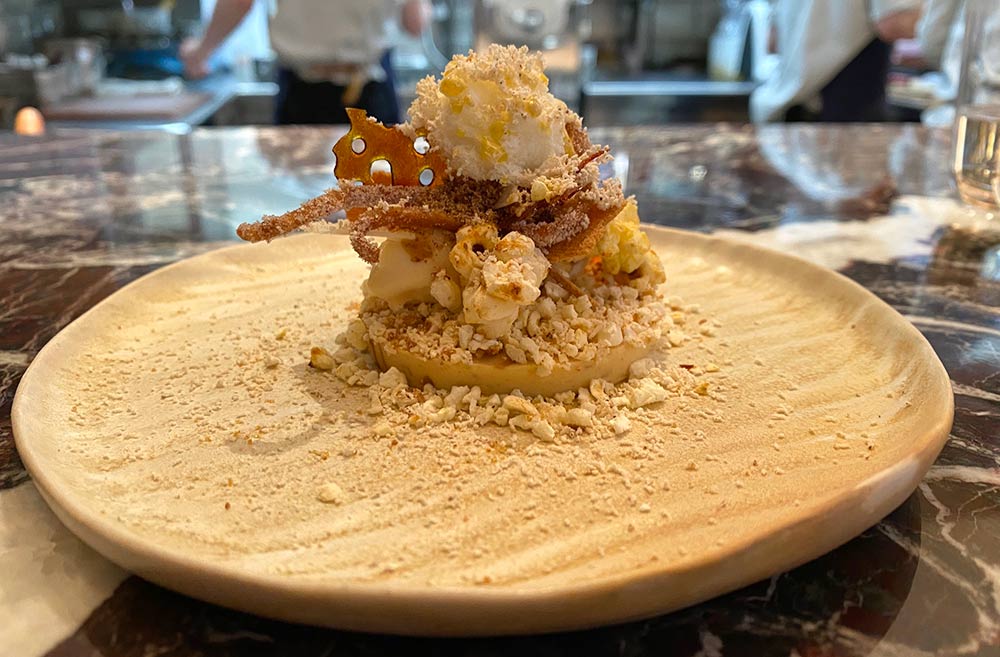 The main dessert dish - Cows and cornflakes, made using the sheeps milk from the first course and with added notes of hay and popcorn. 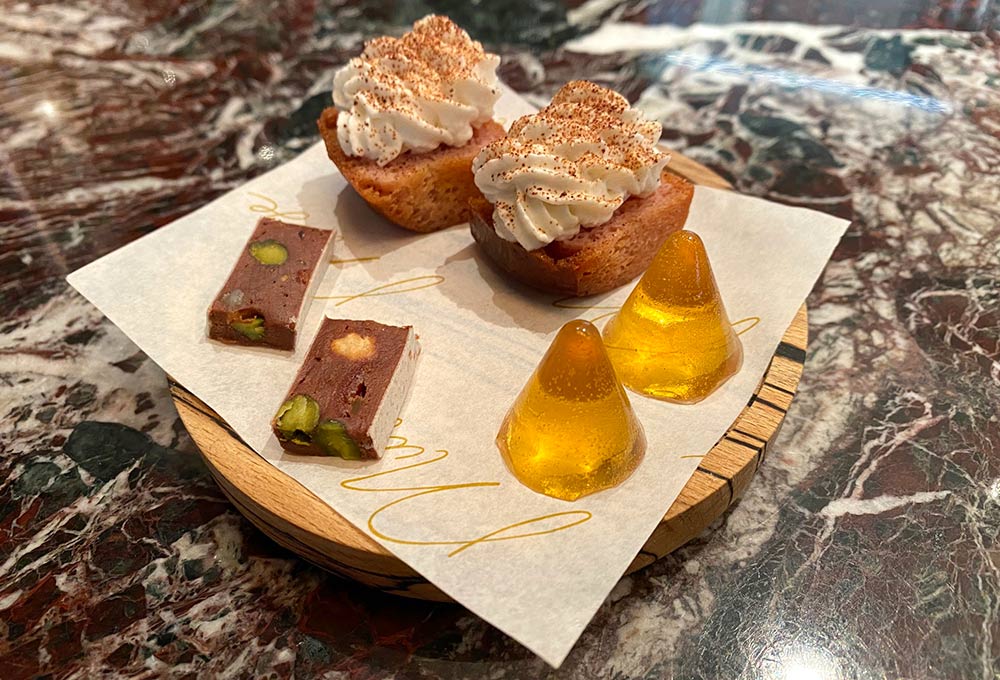 And of course - petit fours. The Laphroaig-infused jellies on the bottom right were the winner here - very, very smoky. In a Caultier-meets-Madonna-inspired moment, they were christened "whisky tits" by our fellow diners at the counter.

There are a few cocktails on the menu, circa £15. Created by Ryan Chetiyawardana of Mr Lyan and Lyanness fame, it's definitely worth having one over the canape course. The Highball (No. 3 London Dry Gin, Rinquinquin Peach Liqueur, Somerset Cider Brandy, Sweetdram Smoked Spiced Rum & Sage) was a particular favourite. As for wines, by the glass starts at £8 (175ml, 2017 Chardonnay du Pesquié or 2017 Le Paradou Grenache) with bottles kicking off at £29 for the same. The main wine list runs up to £315 (2013 Charmes-Chambertin Grand Cru) if you're splashing out. Cornwall and Norfolk beers are on the list too.

We'd suggest placing yourself in the hands of sommelier Giovanna Satta (ex-Restaurant Gordon Ramsay) who found us some super wine pairings by the glass - we particularly loved the Domaine Bernard Defaix Bourgogne (£16 a glass).

When the concept for Muse was originally announced, there were quite a few raised eyebrows at that overblown menu. But when it comes to the restaurant itself, it's a really welcoming experience that's paired with top-of-its-class food. Muse is actually a relaxed and fun place to dine - and worth putting on your to-do list whether you're popping in for lunch or going full-tilt at that 10 course tasting menu.

Hot Dinners dined as guests of Muse. Prices are correct at the time of writing.