[SIGPLUS_EXCEPTION_SOURCE] Image source is expected to be a full URL or a path relative to the image base folder specified in the back-end but /blog/2013/gymkhana/gallery is neither a URL nor a relative path to an existing file or folder.
0
Shares

Modern Indian and cocktails in Mayfair - we Test Drive Gymkhana 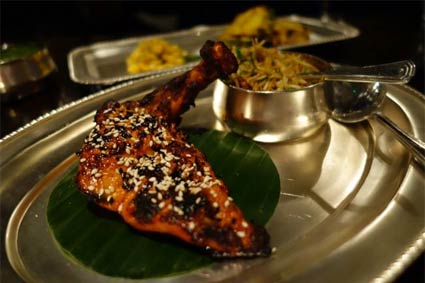 What can you tell us about Gymkhana?

It's the latest from Karam Sethi, the chef behind Michelin-starred Trishna in Marylebone. This time, he's in Mayfair with a restaurant that is "inspired by Colonial Indian gymkhana clubs, set up by the British Raj, where members of high society came to socialise, dine, drink and play sport." So expect modern Indian food and cocktails in a very colonial setting.

It's just off Piccadilly, only a few minutes walk from Green Park station. There are two parts to Gymkhana, a brighter upstairs that's more a traditional restaurant set up and a darker downstairs which has more of an emphasis on booth seating.

So where should I sit?

Based on the above, the light may come into play here as downstairs is certainly darker and probably more suited to groups. There are also two fantastic looking private rooms downstairs, for larger parties (see the gallery). If you like things a bit lighter, then request a table upstairs - we liked the space by the window, particularly the corner table for two that faces into the restaurant.

Really, it's  for anyone who wants a healthy reminder that there's so much more to Indian cuisine than the average curry house delivers. This isn't deliberately belittling curry houses, god knows we visit enough of them, but this place clearly shifts matters up a culinary level (albeit with a Mayfair price attached). It also has a more laid back vibe than the original Trishna with two bar spaces on either floor being evidence of this. The two private rooms and plenty of booths make it ideal for groups too - those spaces would be ideal for upcoming Christmas parties. Also, we were sitting next to Balthazar's Keith McNally on our visit, so expect some of the food world's finest to be checking it out in coming weeks.

And how about a drink beforehand?

Based on our cocktails there, we'd strongly recommend either of the bars on the ground or basement, but with the proviso that you should really try to get a seat actually at the bar if possible (the seat we had in the corner downstairs was a little impersonal). We had both a non-alcoholic and alcoholic cocktail with - perhaps unsurprisingly - the alcoholic Quinine Sour (Tanqueray gin, tonic syrup, ginger, fresh curry leaf, lemon & egg white) coming firmly on top. Cocktail prices range from £9 to £12 and there's plenty on the list we'd try on a return visit. Alternatively, if you fancy a drink elsewhere before/after, it's worth mentioning the nearby Dukes hotel, renowned for their martinis.

What can you tell us about the menu?

There are lots of options worth mentioning. There are tasting menus (£55 or £45 for the vegetarian only option - 7 courses each). We also liked the sound of the Game Tasting menu (£65 for five courses).

Otherwise, you can go for the a la carte, choosing from several sections. First off, there's the bar menu which, when combined with the nashta section, will give you loads of options for starters. Pretty much all of these are enticing, and we'd happily work our way through them even without the main course options. Particular favourites were the Amitsari shrimp and Queenies (£11). We do love our queenies (scallops) and these were a fine bunch. The fried chicken wings, a version of chicken lollipops (£5.50) which we were first introduced to at Roti Chai, were also a winner.

And a very special mention goes to the kid goat methi keema, with salli and pao (£11) which comes with buns allowing you to create mini sliders. These will almost certainly become the always-ordered signature dish, especially if you add the much recommended bheja (minced brains) to the mix. Alas, this wasn't available on our visit, but we've been told it's a must-have if it's on the menu.

We had paneer tikka from the kebabs and tikkas section - the one dish that didn't quite pass muster - but since then we've had rather a lot of paneer in the past week and are beginning to think it's just not for us. On reflection, we should have ordered the bream which has been strongly recommended elsewhere.

Another standout was the tandoori guinea fowl from the game and chops section - perfectly spiced and seasoned - followed by another dish which is bound to be popular, the wild muntjac biryani (£25), which comes to the table encased in the pastry it was cooked in. This would easily feed two people, or just the one particularly greedy Hot Dinners writer. The presentation is very similar to one we had at Dock Kitchen, and that became one of our favourite meals of last year. We won't choose between the two, but trust us that you'll be happy with this one.

The day after eating at Gymkhana, I popped over to Goa and Mumbai for a quick trip and obviously took the opportunity to try as much Indian cooking as I could fit in. The food I had there shifted my perception of what should be acceptable from an Indian restaurant in the UK (some of the food was astonishingly good).

However, it also only served to underline that Gymkhana is a restaurant that compares very well indeed when placed directly against authentic Indian cuisine. Like the few places we visited in India, there's good reason to roam over the entire menu, rather than sticking to trusted favourites. Gymkhana's already getting raves and we think it's definitely a restaurant geared up to earning Sethi his second Michelin star next year or a place on the World's 50 Best list.

Prices were correct at time of writing. Hot Dinners ate as guests of Gymkhana.