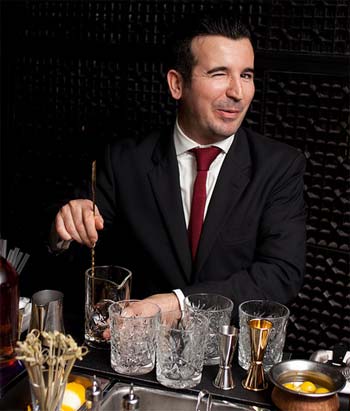 We've taken quite a shine to the new cocktail menu at Benares, Atul Kochhar's Michelin starred Indian restaurant on Berkley Square, Mayfair. Inspired by the summer Olympiad festivities, the 'Medal winning' cocktail menu features a set of three cocktails created specifically to celebrate this event, priced from Bronze (£15) through to Gold (£25).

Hot Dinners were invited to Benares earlier this week to see how these champions are being created. With front row seats at the beautifully adorned Benares bar, we watched the well practised bar team warm up for service. Captaining this effort is Bar Manager Giovanni Spezziga. An accomplished bartender and a well-known face in the London cocktail scene, he previously headed up the bar at the W Hotel, Leicester Square.

Constructing and serving drinks from a purpose built cocktail trolley, Giovanni demonstrated each of the new serves with skill and theatre. Our favourite was the 'Morning Glory', the Gold podium positioned cocktail. A twist on the classic Sazerac cocktail, it combines Chivas Regal 18, Goldschläger, Martini Gold and a house-crafted Benares syrup. We also enjoyed the ‘Cool Runnings’, placed Bronze but by no means any less impressive this Jamaican take on the Julep slid down in record time. A winning performance on all accounts.

You can order these cocktails at the bar or have them made at their table to accompany Kochhar's modern Indian cuisine. Benares will be open as usual throughout the Games and will also be launching a celebratory tasting menu in the coming weeks. Benares Olympiad cocktails are available now through to the end of August.