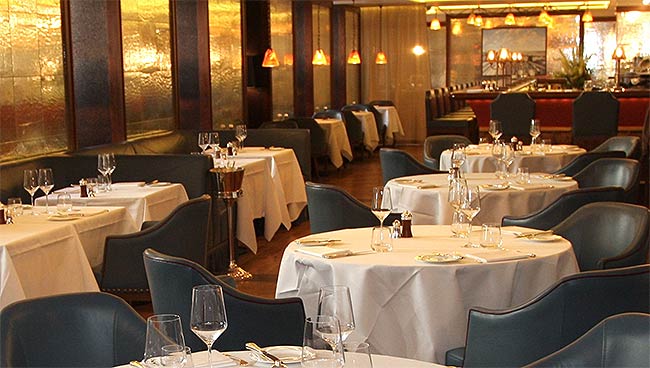 What can you tell us about Corrigan's?

Richard Corrigan is arguably Ireland's most famous chef and one who's been established in London for quite some time, winning a Michelin star at Stephen Bull and having originally opened at Lindsay House in Soho (now occupied by Gauthier). Since then he's taken over the classic seafood restaurant Bentley's in Piccadilly (which celebrates its centenary next year) and established his own flagship restaurant in Mayfair, just next to Grosvenor House. Over in Ireland, he has a farm at Virgina Park in Cavan which provides some of the produce for Corrigan's.

Just off Park Lane, so deep in posh hotel territory (it adjoins Grosvenor House but has a separate entrance).  It's closest to Marble Arch station (although taking an Uber would be a recommendation, we say this having tried the taxi service - finally - for the first time when we visited).

We always have trouble with the part of London that runs along Park Lane. There are lots of hotels in the area, but few must-visit bars. So moving a little further away, we'd definitely recommend a drink at the Connaught but for something a little more affordable, it's worth a 5-10 minute walk to The American Bar at The Beaumont Hotel. And Corrigan's itself has a lovely bar too - so ideally, just prop yourself at the bar, like we did, if you're waiting for anyone to arrive.

All the tables are well placed, so nothing really obvious sticks out - with the exception of The Kitchen Library. This chef's table is right inside the kitchen itself - a small booth that fits four and directly faces the pass (with a glass door in case it's all too much), as well as having a selection of books on the shelves. It's, by far, the best looking and placed chef's table we've seen in person and we'd envy anyone dining there.

There were three of us dining on the evening we went, and we all unreservedly loved the meal we had. It's best described as high-end Michelin style dining - but with Irish portion sizes. So the prices are what you'd expect for a high-end Mayfair restaurant - but you get a LOT for your money.

Although we were there for the a la carte, it's worth pointing out the "Seasonal market menu" that's their set lunch at two courses for £25, and three for £29 - these set menus are great value and an ideal opportunity to try a restaurant that may be out of your price range normally (see more here). The Sunday lunch at £29 has also been highly recommended to us. As for the a la carte when we visited, highlights were:

Also worth mentioning are some of the sides, particularly the Virginia Garden Salad (£8) which you can also have as a starter (£14). This was shipped in overnight from the Cavan farm and was incredibly fresh as a result - a must-order. And the chef does a mean potato gratin too.

Sommelier Riccardo presented us with almost psychic pairing of wines - which seemed as well matched to each of us as they were to the courses - I'm very partial to a Gruner and kicked things off with a 2013 Loiserberg. In all the wines were very well matched, and if your budget stretches to this, you should go for it.

We've mentioned it to a few people before, but in the first few weeks of Corrigan's opening, we had dinner there to talk through this crazy idea we had to start a restaurant website. So it was great to come back and see how things had developed. We'd describe the food here as high-end food in Irish sized portions. Make it a special occasion and go hungry, we don't think you'll be disappointed.

Hot Dinners were invited to Corrigan's. Prices are correct at the time of writing.